The State of Indiana will use the SAP Hana in-memory database as the foundation of a new management reporting system, SAP announced this week.

The state has already done much of the hard work of gathering the data from major state agencies that it wants to analyze, Chris Atkins, chief financial officer and director of the Indiana Office of Management and Budget, said in an interview. "What we really like about SAP Hana is how quickly we can analyze it. It's just incredible how quickly we can do it." The state will also take advantage of SAP's Lumira visualization tool as the basis for its performance dashboards.

In addition to providing internal management reports, Indiana plans to use Hana as part of an open data website where citizens will be able to query state data to see it how they want to see it, rather than only in predefined reports.

"We have a broad initiative here called the management and performance hub, or MPH, where our goal is to become the most effective, efficient, and transparent state in the country," Atkins said. Along with being able to do quick analysis, the state is working to streamline data gathering. "Currently, reporting to Management and Budget is quarterly, but we want to make that as real-time as we can possibly make it."

Though there's still development work to be done, he expects the performance dashboards to be live in a matter of months.

Indiana was not previously a SAP customer, but it committed to broader use of Hana after getting encouraging results with a pilot project focused on analyzing data associated with infant mortality. Every state agency has defined key performance indicators, and infant mortality is one for the Department of Health because of concern that the incidence of deaths is too high -- giving Indiana one of the worst infant mortality records in the nation. The analytics project there is aimed at isolating the reasons for high infant mortality and beginning to address them. 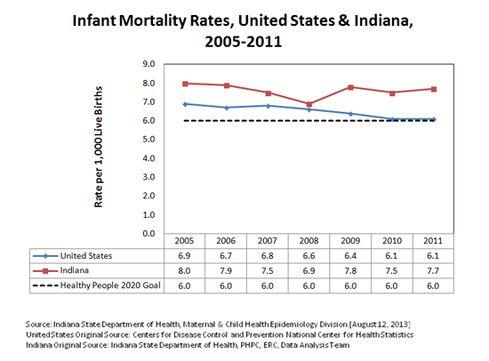 The infant mortality statistics project has been under way for about a year, and Atkins said the hoped-for results are still to come. "We've been working on the 'what' side of infant mortality -- where it's happening, who is happening to, and some of the factors that might contribute to it. Next we want to move into the 'why' and start identifying the predictive factors." Prediction should then lead to prevention. The system is fed with data from a half-dozen agencies that possess data that the analysts believe is relevant. The biggest challenge along the way has been working through the security and privacy issues related to personally identifiable health information. Each agency contributing data to the project needed to get its own assurances that those concerns would be addressed. "From the very beginning, security has been priority No. 1 on this project, and it just takes time to work through those issues."

In the process, Indiana CIO Paul Baltzell, who reports to Atkins, has been tasked with bringing his IT team up to speed on a reporting project unlike any that has come before. "Until the governor put out an executive order in March, there wasn't a standard for an enterprise-wide coordination project like this," Atkins said.

"We believe we're moving from IT to OT, which is operational technology," meaning data will be actively used to improve results according to both financial and other metrics, Atkins said. As a result, he hopes the state will perform better by every measure.

David F. Carr oversees InformationWeek's coverage of government and healthcare IT. He previously led coverage of social business and education technologies and continues to contribute in those areas. He is the editor of Social Collaboration for Dummies (Wiley, Oct. 2013) and ... View Full Bio
We welcome your comments on this topic on our social media channels, or [contact us directly] with questions about the site.
Comment  |
Email This  |
Print  |
RSS
More Insights
Webcasts
Bolstering Your Enterprise Cyber Risk Assessment
4 Practical Tips for Building a Data Lake
More Webcasts
White Papers
Future Proofing Your Network for 5G
The Underground Economy: The Dark Web and the Rise in Sophisticated Attacks
More White Papers
Reports
Future Proofing Your Network for 5G
Enabling Enterprise Resiliency Through Cyberthreat Detection
More Reports