Nearly a half-century later, photographs documenting the first trip to the moon continue to defy imagination. Here's a look at 10 of the best images. 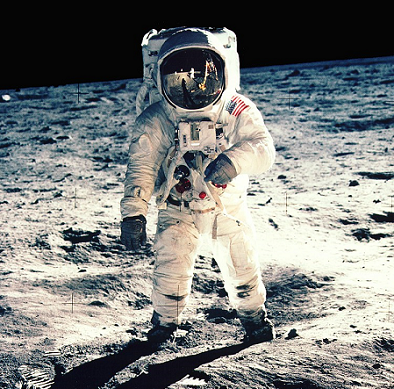 This week marked the 47th anniversary of NASA's first successful moon landing, a momentous event that redefined the limits of impossibility.

Landing on the moon never gets old -- except that it did, as American audiences got bored with consecutive moonshots -- and NASA's mandate shrunk after Apollo 17.

Nevertheless, the significance of the first voyage to Earth's only natural satellite -- where a team of intrepid astronauts hurtled through space to orbit, and eventually descend, on the ghostly, dusty surface of the moon -- seems to grow more profound with each passing year.

With that in mind, we've assembled a selection of the most astounding images from humankind's first expedition to the moon, documenting the launch, the landing, and the splashdown in the Atlantic Ocean.

While subsequent missions to the moon afforded new and more complex analysis of the lunar surface, nothing will ever surpass the breathtaking images gathered on that initial flight. They document a time of audacious exploration that has never been equaled.

[See images of NASA's Apollo missions through the years.]

In a time when trepidation and uncertainty threatens to unweave the very fabric that binds us together as a society, these images may remind us of what we can achieve together.

This is doubly important in recognizing that rudimentary tools and equipment that pale in comparison to today's smartphones and notebook computers we use on a daily basis allowed humankind to take a new, bold step forward.

As Neil Armstrong memorably, if haltingly said, upon setting foot upon the moon, "That's one small step for a man, one giant leap for mankind," if that's what he actually said.

Going to the Moon during that time was quite a technological accomplishment. I don't know if kids today (apparently, I getting old) understand the Space Race or any of the resulting advancements in space flight.
Reply  |  Post Message  |  Messages List  |  Start a Board

You're right, these images do just continue to amaze. It's astounding what was achieved in such a short period of time. The technological advancement was incredible and the people who strapped themselves to those rockets, so brave.

We really need to get human feet on another world, just so we can show the 20th century we still have what it takes. The robots we've thrown on to planets all over are impressive, but we all know that until a human steps on Mars it feels like we're just playing around.

Oh, and nice job on quoting Neil Amstrong in full, most people forget that "a" part of the speech, making it seem a bit contradictory.
Reply  |  Post Message  |  Messages List  |  Start a Board

But the term "earthrise" is somewhat misleading since the moon always shows the same face to the earth; ergo the apparent position of the earth from a given spot on the moon never changes.
Reply  |  Post Message  |  Messages List  |  Start a Board
Editors' Choice
Hot Topics