50%
Tweet
Imagine the possibilities if something like the Peeple app actually let us know how cranky we appear to others and they could rate us.

Recently a new company, Peeple, proposed an app that allows you to rate others and provide feedback. The initial information indicated anyone could add your profile and comments. After 48 hours, you could remove any negative comments but not your profile.

Budding CEO Julia Cordray told the Washington Post the app was like “Yelp for people” but she recanted in a LinkedIn post saying she only wanted to promote Positivity. The massive public backlash didn’t give Cordray the warm fuzzy she was seeking, which included reports of death threats. It is a less than stellar idea but seriously, people -– death threats. Her revised version of the unreleased Peeple app proposes users can opt-in and have complete control of the comments. I thought that app was called LinkedIn. More recently, Cordray indicated in her latest LinkedIn post that the company is moving forward with the hiring of a CTO and co-founder.

Is too Much Positivity a Bad Thing? The cynic in me sees this app as a more formal version of my Outlook I Love Me folder, where I store both of the praising emails I received. The data professional in me sees many opportunities for metrics, KPIs, and charts! Obviously, Cordray is being shortsighted by only allowing positive comments. Most things seem to improve through criticism. You know Tom Peters’ What gets measured gets donephilosophy? 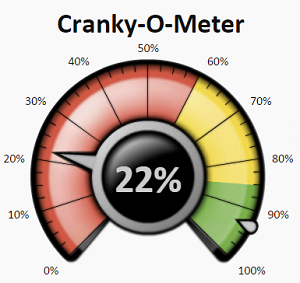 Amazon, recently accused of breeding a culture of jerks, might find this app appealing. It could provide all the positivity apparently lacking in the culture. Wonder how the feedback would look, "Jim only used a handkerchief for his sobs after our showdown. Even with his lame ideas, he is environmentally conscience." Should Jim approve that comment? I would -- I want people to think I'm green. All of these comments would require some serious text analytics to provide any real value.

My Colleagues Need a Personal Performance Dashboard While I like the idea of text analytics, I thing ratings work better because data is easier to tabulate. For instance, most of my colleagues are chipper on Monday and when Friday rolls around they are cranky. If I could provide some quick ratings to them on a scale of 1 to 5, it can only help. I think this was what Quality System Guru, Edward Deming, was suggesting by removing the culture of fear. Yes, good ole’ honest feedback.

A digital dashboard with metrics to drive the right behavior would be perfect. It could combine data from the IOT devices, where even the vacuum and HVAC could add data. A line chart fails to show the complexity we need here, people! You need a bubble chart or a series of scatter plots. Possibly, you could use some geospatial visualizations if you were traveling: not cranky before the airport, but extreme crankiness trending afterwards.

My idea is that your colleagues could then spend Sunday afternoon reflecting on their performance. Other data is always helpful in these circumstances, such as week-over-week averages, or how about comparison to the prison population. Wouldn't you be concerned if you were crankier than those who couldn't beat a death threat charge against a fledgling CEO? In addition, it could have tips like “vacuum your nasty kitchen!”

Just like other dashboards, people would argue about data and professionals would suggest more sophisticated statistical techniques are required. A good defense for the cranky Friday syndrome is lack of restful sleep, multiple deadlines, and annoying others (children and bosses) having a cumulative effect. Maybe that data is harder to correlate to crankiness, and therein lies the problem.

Without the right data, this app has limited potential. If it’s just positive comments, it makes you feel good but it doesn’t drive performance. Maybe others' feedback takes away our individual quirks and weirdness that makes us joyful.

What do you think? Should we rate others? How would we do it?

We welcome your comments on this topic on our social media channels, or [contact us directly] with questions about the site.
Comment  |
Email This  |
Print  |
RSS
More Insights
Webcasts
IT Automation: Scaling to the Future
How Secure is Your Azure Cloud Security Environment?
More Webcasts
White Papers
Global Application and Network Security Report
2020 Security Trends to Watch
More White Papers
Reports
The State of IT Operations and Cybersecurity Operations 2020
State of Endpoint Security: How Enterprises Are Managing Endpoint Security Threats
More Reports