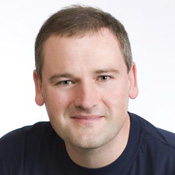 Collaboration software feature used technology from IntroNetworks to connect employees to co-workers with similar interests, expertise, and other attributes.

When Socialtext released version 5 of its enterprise collaboration software in late September, the new feature that leapt out at me was Socialtext 360. It's a way to connect similar people inside an organization--similar interests, expertise, geographic focus, etc.

Both similarity and differentiation have a key role to play in fostering collaboration. Similar people provide a complementary depth and set of relevant experiences. Different people help us see the world in new ways. Socialtext 360 highlights both, though its practical emphasis is on similarity.

Socialtext licenses the 360 technology from IntroNetworks, whose focus previously was to quickly bring people together at major conferences and events. The technology works as follows. The customer must identify four core areas for collaboration. As a default starting position, Socialtext sets those areas to business, technology, geography, and interests, but the customer has complete control over the four areas it wants to use.

Within each area is a controlled vocabulary that an administrator at the customer organization creates and maintains. The idea is to break down each area classification into a set of specific terms that have meaning within the area. For example, within the default "business" area, initial categories include "analysis," "finance," "large enterprise," "retail," and "supply chain." Those terms, like the four area labels, are customizable. Once the administrator has set up the four areas and subsets of terms, each user then sets up his or her profile within Socialtext 360.

To establish a profile, the user clicks into the four areas and selects the terms that are of the most interest, ranking them in importance. The interface was designed to be fun to use, so as to stimulate user engagement, says IntroNetworks CEO Mark Sylvester.

Once users have established their profiles, Socialtext 360 does its magic in the background. It correlates the interests across the four areas for the particular user, and shows links to other people who have similar and diverging interests. The closer a given person is to the red pin in the center of the circle (which represents the current user), the more similar that person is in those areas.

360 is a tremendous step up from the previous profiling capabilities in Socialtext's software. In future versions, I'd like to see extensions in two areas.

The current system requires manual self-ranking of terms in the four areas. What's needed is an analysis engine to synthesize the topics that people have expertise in--based on their activities in other parts of Socialtext--and automatically build and keep up-to-date the user's profile. 360 could take advantage of a lot of work now being done with text analytics.

A second enhancement I'd like to see is the ability to shift the analysis position from the individual to the group or team. For example, if there's a group focused on widget development, 360 could show the aggregated profile of group members (and their discussions within Socialtext), and then visually plot the similarities between that group and other groups in the organization that touch on widget development. This feature would help break down silos.

Overall, I like what I'm seeing here and applaud Socialtext for working with IntroNetworks. I look forward to more capabilities to support the creation of connections between people and groups.

Michael Sampson is a collaboration strategist and author. You can reach him at [email protected] or +64 3 317 9484 (New Zealand).

We welcome your comments on this topic on our social media channels, or [contact us directly] with questions about the site.
Comment  |
Email This  |
Print  |
RSS
More Insights
Webcasts
How the Rapid Shift to Remote Work Impacted IT Complexity and Post-Pandemic Security Priorities
SASE: The Right Framework for Today's Distributed Enterprises
More Webcasts
White Papers
2020 SANS Enterprise Cloud Incident Response Survey
The Top 5 Mistakes Everyone is Making in Vulnerability Remediation
More White Papers
Reports
Intelligent Outcomes Are Key to Business Resilience
The State of Cloud Computing - Fall 2020
More Reports