0 comments
Comment Now
Tweet
Socialcast offers support for internal company activity streams that mimic the news feed on a Facebook page and is available as a service or as a software appliance. 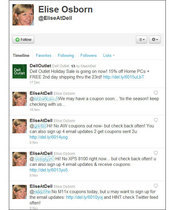 Slideshow: Businesses Take Action With Twitter
Like a lot of companies, SAS Institute has been watching what has been happening in social media and trying to figure out the best way of bringing some of the energy and spontaneous interaction inside its organization.

After a couple of what now look like false starts with Yammer and Salesforce.com's Chatter, SAS has cast its lot with Socialcast. In a phone interview, Karen Lee, senior director of corporate communications, and Becky Graebe, corporate communications manager, explained why. They said the decision was not based on any particularly chummy relationship or partnership, but on the set of criteria SAS had laid out for its internal communication and integration needs.

SAS had started down the path of creating social applications based on Microsoft SharePoint "when the project manager stumbled across Socialcast," Lee said. "We realized it might be a better fit for us, given the timeframe in which we wanted to deliver on our requirements. One of the things that was important to me was that employees be able to reach success with communication through the system pretty quickly. I didn't want it to be something that would take us eight months to a year to get out, and by the time you get it out, it's old."

SAS started out in 1976 as a specialist in statistical analysis software and has evolved into one of the leading business intelligence and data analytics vendors. Based in North Carolina, it remains privately held and independent, with about 11,800 employees. For the last two years, Fortune magazine has rated SAS the #1 place to work in the United States. With operations in 62 countries, it also has a need to support collaboration on a global scale.

As you might expect of a technology company, SAS already has plenty of Web-based collaboration in place, including internal wikis and about 600 intranet blogs. What it saw in Socialcast was the opportunity to spark conversations that link to all those other resources.

"Seeing the way communication was growing outside the company at a very rapid rate with social media, we asked, how do we bring some of that inside?" Lee said. "So we said, let's bring a Facebook application inside the company--and that's exactly what we did."

Socialcast is one of several products promising that Facebook-like experience, starting with support for internal company activity streams that mimic the news feed on a Facebook user's home page. At the same time, these products need to provide more enterprise-specific functions like integration with a company's identity-management and document-management systems. The Socialcast product is available as either software as a service or as a software appliance, and SAS opted for an on premises deployment using the appliance.

Although SAS decided it could not easily meet its requirements with the social features of SharePoint alone, Socialcast's SharePoint integration was an important feature. The Socialcast user interface can be embedded in a SharePoint portal as a WebPart component. Socialcast has also introduced a premium feature called Reach that makes it possible to embed Socialcast widgets for sharing, commenting on, or liking Web pages managed by SharePoint and lots of other Web content systems. (The "Like" button modeled on Facebook can actually be named something else if an organization thinks "Recommend" or some other label sounds more professional).

Slideshow: Top 15 Facebook Apps For Business
Graebe said a SharePoint upgrade was under way at the same time as the Socialcast implementation, so integration between the two hasn't happened yet but is certainly planned. "Now we can implement the Reach feature and begin to integrate into SharePoint Sites and also our wikis and blogs," she said.

The SAS social network, which users dubbed The Hub, had a "soft launch" in January when project team members and key constituencies like the intranet bloggers were invited to set up accounts. They were also given permission to pass the login details on to anyone else they knew who might be interested.

"By the end of the first week of the soft launch, we had over 1,400 users because of the viral impact of people inviting in their friends," Graebe said. "To us, that was a good sign that the usability of the tool going to be as good as we hoped, or better." That first wave of adoption was important because it seeded the system with content, making the environment look more interesting once the rest of the company was invited in, she said. The Hub officially launched on February 14, with a Valentine's Day "Love the Hub" internal promotional campaign. As of Wednesday, it was up to 6,028 users, or more than half the employees in the company. And one of those users has accumulated over 2,000 intranet followers.

Lee said she really sees this as a new mode of communication. "It's nothing you can do over email, and you can't do it by IM-ing or texting," she said.

The Hub has not necessarily replaced other means of sharing or publishing information, such as internal blogs, but that was not the goal. Graebe said employees are told information they want to "live forever" should be stored in some other repository, such as a blog or team website, but that they should link to that content in Socialcast. "We're only keeping new posts on The Hub for 180 days because we don't want to create another information graveyard where things become outdated and inaccurate," she said.

At least, that was the starting point. Now that the system has been in use for a while, employees are posting valuable information to it that perhaps should be archived in some way, Graebe said, but the communications team is still figuring that out.

Previously, several groups of SAS employees had experimented with Yammer as a social tool, and the company had also implemented Chatter on a more formal basis. But Socialcast "has a ton more features" and richer group collaboration, Graebe said. That seemed to become apparent to everyone shortly after The Hub went live, she said. "We had a debate going. Do we get rid of Chatter? Or do we not get rid of Chatter. In the end, we kind of let that die its own death. I'd say within a couple of weeks after we implemented this, Chatter was dead." Now that life signs have ceased, SAS will officially pull the plug soon, she said.

Lee may take a more proactive stance toward killing off email list serves that have been used for collaboration within the company for years. "That's old technology, an old way to communicate, and I'd like to see those die out," she said. Many of the email list managers are already coming to her asking for a way of migrating to the social media system, she said.