Software that gained fame as an online tool for Barack Obama's 2008 campaign puts setting and tracking corporate goals at the center of enterprise social networking.

Enterprise Social Networks: Must-Have Features Guide
(click image for larger view and for slideshow)
In politics, they call it opposition research -- stalking the other candidate to note every gaffe, inconsistency or other blunder that your candidate might be able to exploit in an ad, or a debate or a leak to the press.

Edward Saatchi, founder of social software company NationalField was up to some of that when he attended Yammer's YamJam user conference this week, capturing everything there was to mock about the struggle to translate enterprise social networking into business value, and sharing pointed observations on Twitter, followed by a series of sarcastic videos (embedded below).

The style NationalField adopted may have something to do with the origins of its software, originally used as a reporting system for field organizers in the 2008 Obama campaign. Son of Maurice Saatchi, co-founder of the London-based global advertising agency Saatchi & Saatchi and member of the House of Lords, Edward Saatchi had come to the United States to volunteer because he was inspired by Barack Obama's campaign. While working in South Carolina and Georgia with Obama staffer Jeremy Bird, who went on to become the campaign's national field director, Sataachi and some like-minded peers observed how much time was wasted in conference calls and relaying data up the campaign hierarchy by phone, and they thought it might make sense to move those activities into an online environment that looked something like Facebook. Chris Hughes, a former Facebook marketing leader who was part of its original Harvard founding team and left to join the Obama campaign, was also part of this story and still sits on NationalField's advisory board.

[ Do you know the price of free software? Read Yammer And The Freemium Trap.]

But while NationalField shares the Facebook clone look of so many enterprise social networking products, from the beginning it was organized around metrics. In the campaign, what that meant was that as volunteers came back from knocking on doors or finished up a night of phone banking, the field organizers would enter not just status posts but critical statistics: calls made, doors knocked, contacts and voters for, against and undecided.

In the version NationalField now promotes for business use, employees might do the same kind of reporting for sales opportunities and deals closed -- with the social conversation tightly focused around those metrics.

"If you want to know the big difference between us and other folks -- and the reason we've shifted to enterprise [as a market for the software] in the last year or so -- in one sentence, I'd say it's that other social enterprise players focus on communication, whereas we focused in on competition," Saatchi said in an interview. When he looks at Facebook, he sees competition, even if it's mostly a matter of competing for attention. His approach is to harness that competitive force for business purposes. Other social software vendors, thinking of social media as communication channel, tend to talk about metrics like reducing email "as if that would produce productivity at some point, just by moving communication from one screen to another," he said. 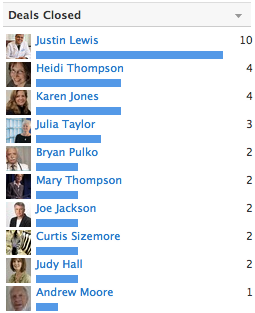 A NationalField Leader Board For Deals Closed

By focusing on business metrics, NationalField has been able to demonstrate the ability to improve them, Saatchi said. In fact, when customers sign up for the social software service, they name three key performance indicators they want to influence, which are baked into the contract. If NationalField helps the organization achieve a 15%, 30% or 40% improvement, it earns a "success fee" above and beyond the basic $10 per user, per month fee for the service. NationalField is able to charge more than its competitors "because we go in with more of a value message," Saatchi said. "You need to be able to walk into meetings with something like that, especially after the Facebook IPO, where people aren't as intimidated by social anymore."

NationalField's approach to encouraging competition sounds a lot like what others are calling gamification, although Saatchi avoids using that word. The software prominently features leader boards so employees can see how they are ranked compared to their peers, as well as group dashboards that show how different teams are doing.

"When we were working on the campaign, we weren't thinking gamification then, but we had a sense of the psychology that people crave recognition for the work that they do," he said. "It's like Moneyball, if you've seen that movie or read the book, where the cool thing is that the coach can sit down with the player and put the data in front of them," showing what they do well but also that the thing they think they're best at still needs improvement, he said. While some coaches might hesitate to share the data, players -- and employees -- are often "grateful for getting recognition for something that's actually accurate" as well as precise feedback on what they need to do better, he said. 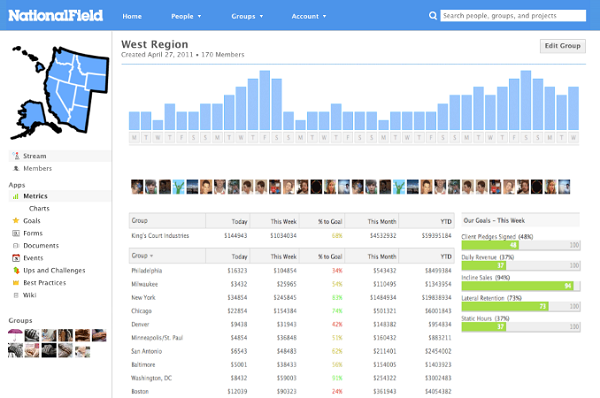 Group Metrics For A Sales Team

After President Obama's election, NationalField continued to provide ground-game organizing tools for Democrats and also picked up work from non-profits and government agencies, including the U.K.'s National Health Service. It also began attracting corporate customers, such as Kaiser Permanente.

Many of those deals were the result of former Obama campaign staffers or volunteers landing at other organizations where they saw the potential for something like NationalField to make a difference. As time went on, more of them started to report back that their organizations were using Yammer, a tool that is "something that looks a bit like NationalField, but it doesn't have the data stuff or the competitive features, and it doesn't seem to have management very involved," Saatchi said. "They'd say, 'I'll be the champion for you if you'll come into this company.'"