With the rise in attacks on stadiums, airports, and concerts, along with the increased severity of natural disasters such as hurricanes and floods, researchers at Embry-Riddle are studying how humans behave on the worst days of their lives.

Have you ever been in an airport or at a theater and thought to yourself, “If there’s an emergency, where are my exits?” Well, it turns out, when placed in a panic-inducing situation, knowing your exits does little good.

According to new research from Embry-Riddle Aeronautical University, during a disaster, escapees are more likely to look for an exit they saw earlier, even if it's farther away, or follow a crowd, even if it means they'll be moving slowly. As evidenced by the unfortunate number of disasters that happened last year, this "panic behavior," if unassisted, can result in fatalities and many injuries.

The rise in incidents that require emergency evacuations, such as airport and concert shootings, hurricanes, and terrorist attacks, has a team of students and professors at Embry-Riddle Aeronautical University’s Daytona Beach Campus employing parallel computing to tackle a topic with very little existing research. Their goal is to analyze human behavior in emergency evacuations from places like airports and other enclosed areas to help create more efficient evacuation policies and save lives. 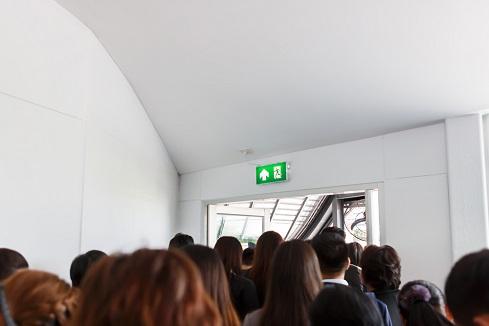 One faculty member on the project, Dr. Sirish Namilae, assistant professor of Aerospace Engineering at the Embry-Riddle Daytona Beach Campus, is using a material science technique called molecular dynamics, a computer simulation method for studying the physical movements of atoms and molecules, to analyze pedestrian motion in an emergency situation.

One way they apply this method is by looking at something called social reversion. “There’s a certain distance at which we’re comfortable being close to a person,” says Dr. Namilae. “After that, we maintain that distance.” The other factor that comes into play when thinking about how a pedestrian moves in a situation is their natural inclination to move toward a specific target. “Balancing these two forces leads to the evolution of motion and that is the basic methodology we use,” says Dr. Namilae. 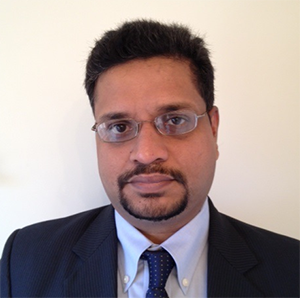 But distance kept between people and the impulse to move toward a target, such as an exit, are only two factors that go into assessing behavior and efficiency in an emergency situation. Other factors, or parameters, says Namilae, include speed of the pedestrian, size of the room, number of people, how many gates exist, the age of pedestrians, and so on.

There are thousands of parameter combinations when assessing the entirety of an emergency evacuation. The way the researchers are able to analyze the outcomes of these combinations is by building a mathematical model which they then turn into a computer simulation.

“One of the unique features of this study, is we use [computer] simulations,” says Dr. Dahai Liu, professor in the School of Graduate Studies in Embry-Riddle’s College of Aviation, “Once the model is built, we can pretty much duplicate any situation that involves a human.” 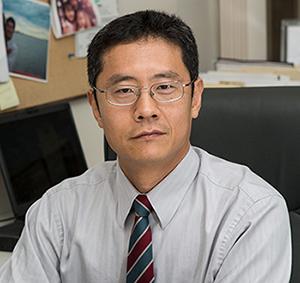 It would be virtually impossible for a human to calculate all of the combinations in any reasonable amount of time, so the researchers use parallel computing, or supercomputers to get the job done in a fraction of the time.

A normal computer has between one and four processors, but Embry-Riddle’s supercomputer contains 25,000 processors.

Namilae explains how parallel computing beats the use of the human brain for their research:

“If you have parameters like [those in this study], and multiple options for these parameters, it’s possible to have 25,000 parameter combinations. Now, that’s 25,000 times two [human] hours [of computation], which is 50,000 hours. But if I do [parallel computing] on 25,000 processors, it’ll be done in two hours, plus some additional processing time, maybe four hours.”

While the researchers still have a second phase of their project to complete, Liu says that down the road in phase two, the team is interested in making their model into a tool that could benefit passengers or help airport management to put a proactive evacuation program in place.

Emily Johnson is the digital content editor for InformationWeek. Prior to this role, Emily worked within UBM America's technology group as an associate editor on their content marketing team. Emily started her career at UBM in 2011 and spent four and a half years in content ... View Full Bio
We welcome your comments on this topic on our social media channels, or [contact us directly] with questions about the site.
Comment  |
Email This  |
Print  |
RSS
More Insights
Webcasts
People Are The Most Important Part of Autonomous SOC
Nip Ransomware in the FUD: Detecting Attacks Pre-Encryption
More Webcasts
White Papers
Insider Risk Management: A Better Way to Prevent Data Leaks
A Business Case for Vulnerability Remediation Orchestration
More White Papers
Reports
Trustwave Global Security Report
Intelligent Outcomes Are Key to Business Resilience
More Reports