Cross-national perspectives on scaling up companies, hiring talent, and collaboration marked the release of a report on British tech.

Last week, Tech Nation, a London-based network for tech entrepreneurs, visited New York to offer some perspective on the role of British tech on the world stage. With an event hosted at the Times Square offices of Thomson Reuters, Tech Nation released a report about the state of the British tech ecosystem and how it fits into the international scene.

Though much of the event centered on British startups scaling up, a distinct observation about DevOps came through. According to the report, DevOps was the leading focus of online collaboration among developers in the top 10 cities based on GitHub activity. The report asserts that DevOps gets more love in cross-border, online discussions than with local meetup groups for technology, where just 8% of the total meetup community focused on DevOps. Software development took the lion's share of attention in the tech Meetup scene of the surveyed cities.

The perspective the report offers can be a sign the DevOps community is eager to tap into the experiences and skills of peers from across distant regions. This is not to say that localized DevOps communities of collaborators never gather but it could be an indication that geography is no barrier to discussing this methodology. 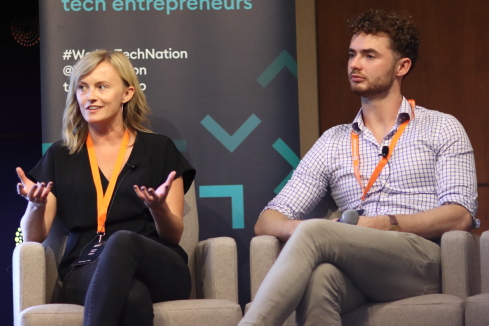 Tech businesses that want to scale across borders and regions face a number of obstacles, said Westgarth. He was the first of the Revolut team to set up shop in North America. “One of the biggest challenges we had was decentralizing our operations from our London headquarters,” he said. “It took the business some time to realize in order to effectively take hold of the market, you had to decentralize reporting lines and decision-making.” Naturally this also included local hires and the opening of more offices on the continent. “We’re bringing our technology here and will be rolling out our platform to American and Canadian markets very soon,” Westgarth said.

There is a common issue that organizations face when they try to expand to new territory. Hiring the right personnel to advance any plans to scale up is something every tech company must worry about, said Owen. “The tech market within New York is so competitive for talent-- you have to compete with banks and everybody trying to hire the best and brightest tech talent,” she said. “You’re not only going against the Googles and Facebooks of the world, but you’re also going against VC, Series A, Series B companies that have these really cool stories they are trying to tell.”

Compensation obviously plays a key role, Owen said, in attracting people with the right skillsets who fit company culture -- but opportunities for equity could make the difference on the global hiring front in tech. “The U.S. market is very focused on equity,” she said. “When you go to the UK market, equity isn’t as big of a player yet, but it will be.” Anticipating more exits in Britain, Owen said she believes tech talent in that country will pursue the benefits of receiving equity as part of their package. “It’s just not there quite yet.”

Joao-Pierre S. Ruth has spent his career immersed in business and technology journalism first covering local industries in New Jersey, later as the New York editor for Xconomy delving into the city's tech startup community, and then as a freelancer for such outlets as ... View Full Bio
We welcome your comments on this topic on our social media channels, or [contact us directly] with questions about the site.
Comment  |
Email This  |
Print  |
RSS
More Insights
Webcasts
Key technology trends in 2021 - Making these technologies work for your business
Cybersecurity's Next Wave: What You Should Know
More Webcasts
White Papers
Why Add Security to Your Skill Set and How to Do It
How Hyatt Eliminated Bot Attacks Without Impacting their User Experience
More White Papers
Reports
Protection Strategies for a Cyber-Resilient Organization
How IT Security Organizations are Attacking the Cybersecurity Problem
More Reports