The new report by DORA on the state of DevOps in 2018 found outsourcing to be the crutch of low software delivery performers.

The DevOps Research and Assessment (DORA), which is a collaborative effort between DevOps experts Dr. Nicole Forsgren, Gene Kim, and Jez Humble, has released its 2018 State of DevOps report. This report is released annually and is in its fifth year. The researchers use cluster analysis, which allows readers to compare their performance to their rubric of software delivery performance, which categorizes performers as elite, high, medium, and low.

The survey showed that functional outsourcing (one role as opposed to an entire process) had a negative impact on performance.

“[Functional outsourcing has] been a common barrier to the adoption of DevOps,” says Jez Humble, CTO and founder of DORA. “We see teams all the time [say], ‘We’d like to do DevOps, but we have functional outsourcing…so it’s impossible to collaborate,’” says Humble, adding that he was glad to see that what they are hearing in the field was strongly confirmed in the data. 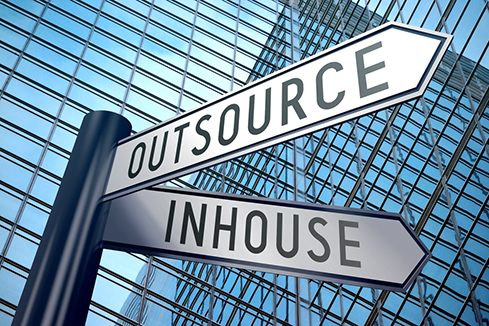 According to the report, one reason why outsourcing negatively affects software delivery and operational performance (SDO) is that outsourcing often results in batch software updates, which can lead to longer lead times.

The report provides an example from shipping company, Maersk Line. The top three features had a cost of delay of around $7 million per week or $30 million per month. At that rate, the cost to delay features would pale in comparison to the cost savings of outsourcing.

When it comes to outsourcing, Humble says it doesn’t have to be a cost drain, but it needs to be properly evaluated. “Consider [outsourcing] holistically, consider the economics holistically, and find out if it really is the benefit you expect.”

While functional outsourcing does seem to have a significant negative outcome on SDO, it’s not the only factor that impacts SDO. For example, the research also found that the way cloud infrastructure is implemented also had an impact.

According to NIST, and as documented in the report, there are five essential characteristics of cloud computing: on-demand self-service, broad network access, resource pooling, rapid elasticity, measured service.

One more key takeaway from the report was that the research showed that high performance is not only for the small, nimble, and unregulated industries. It’s industry- and company-size agnostic.

“Anyone can do this,” this being high software delivery performance, says Humble. “We find highly regulated, big companies in our high performers, we find small non-regulated companies in our low performers. We don't find any statistically significant difference between different verticals on software delivery performance,” says Humble, although he adds that it is hard work.

Emily Johnson is the digital content editor for InformationWeek. Prior to this role, Emily worked within UBM America's technology group as an associate editor on their content marketing team. Emily started her career at UBM in 2011 and spent four and a half years in content ... View Full Bio
We welcome your comments on this topic on our social media channels, or [contact us directly] with questions about the site.
Comment  |
Email This  |
Print  |
RSS
More Insights
Webcasts
People Are The Most Important Part of Autonomous SOC
Cybersecurity's Next Wave: What You Should Know
More Webcasts
White Papers
Why Add Security to Your Skill Set and How to Do It
Protection Strategies for a Cyber-Resilient Organization
More White Papers
Reports
The State of DevSecOps Report
How IT Security Organizations are Attacking the Cybersecurity Problem
More Reports