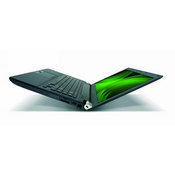 Toshiba Tecra R840
Toshiba has made its mainstream business laptops thinner and lighter and has boosted the performance of its most portable pro notebook with the addition of Intel's latest Core processors.

Toshiba has slimmed down the R840 and R850 to 4.2 pounds and 5.3 pounds, respectively, while lessening the thickness to an inch for the smaller laptop and 1.2 inches for the R850. The reductions are due to the introduction of a case made of a fiberglass-plastic blend that's lighter and stronger than the plastic used in building the previous models, Kelcey Kinjo, product manager for Toshiba, said in an interview Wednesday.

The R840 is thinner than the R850, because Toshiba has incorporated a higher density motherboard and has used the same airflow design for cooling as in its new 13.3-inch Portege R830, its thinnest and lightest business laptop, Kinjo says. "The actual spec is 1.08 at the thickest for the Tecra R840, compared to the M11, which was at 1.44, so we actually cut it down by 25%."

The R850, Toshiba's more standard business laptop and a desktop replacement, is left thicker and heavier in order to keep the cost down. The manufacturer's suggested retail price for the beefier system ranges from $879 to $1,399, depending on the configuration, while the R840's MSRP ranges from $899 to $1,479.

The Portege R830 is the same size and design as its predecessor the R700. The R830, which has a magnesium case, has a starting weight of 3.1 pounds and is an inch thick. Because of Toshiba's proprietary airflow design, the small system has a cooling system that can handle any of Intel's second-generation mobile Core processors. MSRP ranges from $1,049 to $1,649.

All three systems are available with the latest mobile Core i3, i5 or 17 chips and a 7200 RPM hard drive or 128 GB solid state drive. The pro laptops are also available with an optional AMD Radeon discrete graphics card with 1GB of dedicated memory. The systems include USB 3.0 ports and the choice of a DisplayPort or HDMI connector for attaching to external monitors. All the systems support the same Toshiba docking stations.

We welcome your comments on this topic on our social media channels, or [contact us directly] with questions about the site.
Comment  |
Email This  |
Print  |
RSS
More Insights
Webcasts
SecDevOps: Tying Security to Your Application Development Processes
Using Artificial Intelligence, Deep Learning and Machine Learning for Cyber Defense
More Webcasts
White Papers
DevOps for the Database
The Cloud-First WAN For Dummies
More White Papers
Reports
Annual Global State of the WAN
Special Report: Edge Computing: An IT Platform for the New Enterprise
More Reports