T-Mobile To Merge With MetroPCS - InformationWeek

I'm a T-Mobile customer, and as much as I'm glad the merger with AT&T didn't go through, I'm sad that it didn't. Chicago is a tricky market and the cell coverage isn't what it should be. Despite what the coverage maps of <pick a carrier> might say, there are large areas of weak or uneven coverage all over the place. The failed merger could have at least evened that out, at least in theory.

[Update: Late Wednesday the merger was formalized and announced. We will publish an update to this story soon.]

Something even more interesting came to light Tuesday. DealBook, an off-shoot of the New York Times, is reporting that T-Mobile parent, Deutsche Telekom, is currently in talks to purchase MetroPCS, a CDMA compatible, pre-paid cell provider. Despite the obvious technology incompatibilities -- the carrier likely uses and roams on Verizon controlled cell towers -- investors seem to like the idea. Shares in MetroPCS climbed nearly 18% on Tuesday, to $13.57, valuing the company at $4.93 billion. 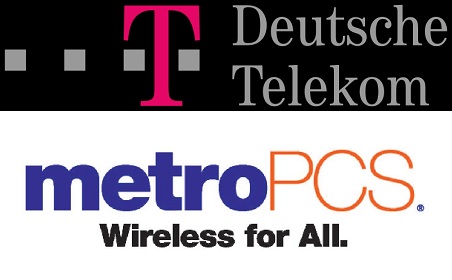 DealBook seems to think that the rumors, if true, will give T-Mobile USA a decent, though lower-margin, pre-paid presence that could help it battle its waning postpaid business. During the second quarter of 2012, T-Mo lost 205,000 subscribers, or four times the number it lost a year ago during the same period. While MetroPCS would only boost T-Mo's numbers by about a third of its current subscriber base (or 9.3M customers), a T-Metro marriage does provide Deutsche Telekom with two things that it does desperately need: spectrum and a burgeoning LTE network.

MetroPCS runs on a CDMA compatible network. Some people think this is going to be a problem for the GSM-based T-Mobile USA. I don't think so. I remember back in the day when Cingular was just a brand new company, much of the Bell South customers it gained from the merger that created what would eventually become AT&T Wireless ran on a TDMA network. Cingular wanted to run on GSM and made its entire customer base dump their current phones for GSM compatible handsets. While there was much wailing and gnashing of teeth, it happened. It could happen again for MetroPCS customers

As I said, though the deal is about spectrum. It's also about saving cash. MetroPCS is a public company. Should a deal be reached and create a new public entity, Deutsche Telekom could sell down its stake in T-Mobile USA over time, accomplishing another one of its goals: getting out of the US market. That was likely the major goal for them in the failed AT&T merger.

No, this deal could still go through and be a success. Two of the things that T-Mobile USA lacks are spectrum in the right markets and an LTE network to start from; and they would gain both in a successful merger. For them to have a chance to be competitive, they need both. MetroPCS already has an LTE network started. Provided that network exists in or could be engineered in the right markets, a new, larger T-Metro could create other opportunities.

Back in 2008-2009 timeframe, there were rumors of a Sprint-T-Mobile marriage. It was killed largely over the technology incompatibilities (CDMA vs. GSM). However, a re-envisioned T-Metro may be a more attractive merger partner to Sprint. Additional possibilities open up at that point for a pre-paid carrier that runs on both GSM and CDMA technologies until a unified VoLTE (voice over LTE) network blossoms between all three with their re-farmed spectrum to support it.

Some may think this a bit crazy, and 2-4 years ago, I would have been right there with them, thinking myself delusional. But the more that I think about it, the more I like this idea. If regulators were looking for a situation that might create more competition and a solid third wireless carrier opportunity, a T-Mobile-MetroPCS merger may be the start of it all.

Crazy? Unrealistic? Perhaps. Maybe I'm totally out to lunch on this one; but I'd love to hear what everyone else thinks. Join me in the discussion and tell me what you think.

We welcome your comments on this topic on our social media channels, or [contact us directly] with questions about the site.
Comment  |
Email This  |
Print  |
RSS
More Insights
Webcasts
Detecting and Preventing Insider Data Leaks
Optimizing App Performance in the Cloud
More Webcasts
White Papers
Why Add Security to Your Skill Set and How to Do It
Understanding Credential Abuse Attacks: A Real-World Example
More White Papers
Reports
The State of DevSecOps Report
The Malware Threat Landscape
More Reports