50%
Tweet
The 13.3-inch mobile PC runs Intel's new Core i5 or i7 Sandy Bridge processors and has an optional sheet battery that doubles the system's power life to 15 hours. 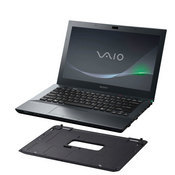 Sony has introduced the S Series Vaio, a 13.3-inch laptop that runs Intel's latest Core i5 or i7 processors, known as Sandy Bridge.

The laptop is an inch thick and is available with an optional "sheet battery" that can double the system's power life from up to 7.5 hours to 15 hours. The thin battery fits onto the bottom of the system and can be added while the laptop is running.

The Vaio S Series has a starting price of $970, which places it at the high end of mobile PCs running Windows 7. The system is available with a number of options to boost performance and the price tag.

Those options include the extra battery, which costs $150, a Blu-ray disc player, and a 1-GB Radeon HD 6630 graphics card from Advanced Micro Devices. The system comes standard with a built-in Web camera and Sony software that make it possible to access the Web quickly without fully booting up Windows.

Adding options can take the price to as high as $2,499. Systems at that level include a 2.7-GHz Core i7 processor, Windows 7 Professional, 8 GB of memory, a 256-GB solid-state drive, a Blu-ray player, and the 1-GB Radeon HD 6630. The higher priced system also includes an HDMI port for connecting to a high-definition TV.

The Vaio S Series comes in black or white. Sony is taking pre-orders and expects to start shipping the product March 29.

Sony issued a recall of a half million Vaio F- and C-series laptops last June, saying the systems could overheat to the point where they could warp and burn users. The systems were sold through a variety of retailers, including Best Buy, Costco, Frys, and Amazon, between January and April 2010 for prices ranging from $800 to $1,500. The computers were manufactured in China and the United States.

We welcome your comments on this topic on our social media channels, or [contact us directly] with questions about the site.
Comment  |
Email This  |
Print  |
RSS
More Insights
Webcasts
SecDevOps: Tying Security to Your Application Development Processes
Using Artificial Intelligence, Deep Learning and Machine Learning for Cyber Defense
More Webcasts
White Papers
The Best Free Vulnerability Management Tools
When and How to Best Leverage an MSSP
More White Papers
Reports
The Drive for Shift-Left Performance Testing
Connecting the Dots: Key strategic opportunities in a post-COVID-19 world
More Reports