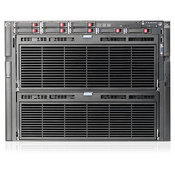 HP ProLiant DL980 G7 Server
Major server vendors are in a refresh frenzy, boosting power and performance with the latest Intel Xeon E7 processors that provide up to 10 cores per processor.

Hewlett-Packard and Supermicro are among the first to max out the E7's power in 80-core, eight-socket servers. Other vendors, such as Cisco and Dell, appear to be satisfied, initially, with maximum four-socket systems with up to 40 cores.

Intel released its most powerful Xeon server family Tuesday. The Xeon E7 now takes the top end of the brand, while the E5 and E3 families hold the midrange and entry-level positions.

The E7 supports 2TB of memory and is based on the Westmere EX architecture, a follow up to the eight-core maximum Nehalem EX. Both architectures have the so-called "RAS" features (reliability, availability, and serviceability) that make the four- and eight-socket servers competitors to RISC systems, such as HP's Itanium servers, IBM's Power systems, and Oracle's Sun Sparc computers.

The top-of-the-line E7 chips, the strongest competitors to high-end RISC systems, are pricey, costing more than $4,600 each in quantities of 1,000. But compared to RISC system prices, an eight- or four-socket x86 powerhouse sporting the chips is likely to be competitive.

HP plans to release in June an eight-socket ProLiant DL980 G7 server with up to eight 10-core E7 4800 processors, a spokeswoman said in an interview Wednesday. The server today is a four-socket system that supports Nehalem EX-based, eight-core Xeon X6550s with a clock speed of 2.0 GHz and 256 GB of standard memory. Such a configuration starts at $52,400.

These large systems, along with some four-socket servers with 10-core E7s, will compete with RISC servers in running business applications, such as enterprise resource planning systems, analytics and business intelligence software and other highly computational tasks. "So long as these processors compare in features and performance and come in at lower price, by chip and total cost of ownership, compared to RISC competitors, they'll be welcomed by the market," IDC analyst Shane Rau says of E7 in an email interview.

The market for such systems is less about unit sales and more about revenue. Four- and eight-socket systems, RISC and x86, account for 5% of server shipments and 16% of revenue, according to IDC.

Mainstream x86 servers are expected to continue to be two- and four-socket systems, even with the E7 chips. Servers higher than four sockets are expected to account for only about 1% of x86 market revenue, according to market researcher Gartner.

A two- and four-socket E7 server will be higher priced than other servers in the category. The price tag will be justified by the RAS features, including higher security and better power management, and the additional memory, which translates into a better system for virtualization, Scaramella says.

Dell is offering E7 processors in its PowerEdge R810 2U rack server, which has up to 32 memory DIMM slots that the company says provides the capacity of older four-socket servers in a two-socket box. This enables software licensing costs of a two-socket system in running virtualized workloads handled by a four-socket system today, according to Dell. The computer maker is also offering E7 processors in its four-socket R810 and R910 rack servers.