50%
Tweet
Tethercell from Tetherboard provides remote control over batteries via a Bluetooth 4.0 connection and can be recharged.

Leave it to two rocket scientists to invent an intelligent, programmable battery.

Tethercell is a new piece of hardware from Tetherboard that smartens up AA batteries. Together with a smartphone app for iOS and Android, Tethercell grants remote control over batteries via a Bluetooth 4.0 connection. Features include: remote on/off, scheduling, timers, and low-battery alerts. Also, the Tethercell app helps people find batteries — within the device's limit of about 60 feet.

A AAA battery within the Tethercell enclosure fits in a AA battery socket. Click for larger image.
This is how Tethercell works. It replaces a standard AA unit with a container that looks like an AA battery but instead has a compartment for a single AAA battery. The container also houses the hardware Tethercell — including a Bluetooth radio receiver.

According to the company, the control hardware includes "cutting-edge" electronics based on the TI CC2540 micro controller, as well as a slew of other very tiny pieces of technology that embed the smart features in the device. Basically, the various components control the AAA cell and relay information about its status via the Bluetooth radio.

In terms of Tethercell battery performance versus regular AAAs, the company says that an AAA battery has about half to a third of the capacity. Using rechargeable AAA batteries will help increase performance, the company maintains, and especially with motorized devices. That's because rechargeables have "low internal resistance, especially in high-drain devices [like motorized ones]," according to the FAQ on the Tethercell IndieGoGo page.

Interestingly enough, the company also claims that it's possible to re-charge batteries while still inside the Tethercell enclosure — reporting successful charges with NiMH AAA cells on a La Crosse BC-700 charger.

One of the reasons for the Tethercell's battery life is Bluetooth hardware. Bluetooth, according to the company, isn't a significant drain on the battery. For example, if otherwise unused, it allows a Tethercell unit to run for six to 12 months on a single AAA battery charge. It does so by making minimal use of the Bluetooth radio, turning it on only when necessary. 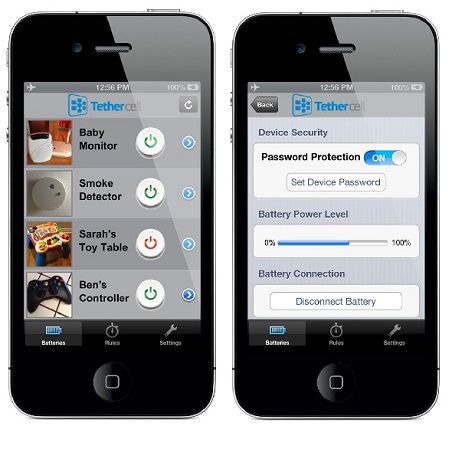 In addition, the device also comes with privacy features so the app doesn't get confused about whose smart batteries are whose. The feature, called Device Password, lets users enter a personal code to connect to Tethercell.

According to the company, it has successfully tested the app with four Tethercells connected at once. BYTE couldn't find out from the company by the time of writing if the app is able to group Tethercells by device, but if more than one battery is Tethercell-controlled, shutting it using Tethercell should shut the device.

If you're interested in trying out a unit, they are available for $35 each on the company's IndieGoGo fundraising page until April 23.

In the future, the company says it hopes to release a 9V and AAA version of the prototype. It also wants to sell the AA Tethercell for under $10 according to a CNET story.

The company recently received the Bluetooth SIG "Breakthrough of the Year" award for its work on the product.

While it looks like Tethercell has more "cool" than actual use right now, BYTE encourages our readers to speculate on possible uses for Tethercell in the comments.