50%
Tweet
The Quadro 400 is five times faster than high-end consumer gaming cards and its small footprint allows it to fit in any workstation. 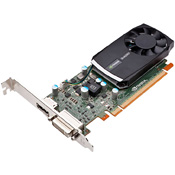 Nvidia Quadro 400 GPU
Nvidia has introduced a professional graphics processing unit (GPU) that is small enough to fit in even the smallest workstations.

The Quadro 400, introduced Tuesday, consumes less than 35 watts and has a small enough footprint to fit into any workstation, including small form-factor systems, Nvidia says. The GPU has 512 MB of DDR3 memory and features a 30-bit color engine with a dynamic range of more than 1 billion color variations.

"The Quadro 400 is the right tool to help ensure that job gets done the right way, especially when it comes to running professional apps like Autodesk AutoCAD," Jeff Brown, general manager for Nvidia's professional solutions group, said in a statement.

The new product follows by a month the release of the Quadro 2000D for medical imaging equipment used to display high-resolution imagery to diagnose disease and other medical conditions. The Quadro brand of professional graphics is built on Nvidia's Fermi architecture, which features up to 512 cores.

Features in the Quadro 400 include a unified driver architecture for forward and backward compatibility with professional application software drivers. The GPU also has "hardware 3-D window clipping," which enables faster data transfer between a window and the frame buffer to improve overall performance, according to Nvidia.

Other features include support for two active connectors: a dual-link DVI with a resolution up to 3840 x 2400 pixels at 24 Hz on each panel, and a DisplayPort with up to a 2560 x 1600 resolution. A card can drive up to two displays, but can be used with three additional cards in the same system to drive as many as eight displays.

The Quadro 400 supports Nvidia's 3-D Vision Pro, which enables 3-D visualizations on a range of display options, from a single desktop panel to a multi-projector power wall.

Nvidia's latest pro GPU is now available in workstations from HP and Fujitsu. Lenovo is expected to offer the card with its ThinkStation in May. The Quadro 400 has a manufacturer's suggested retail price of $169.