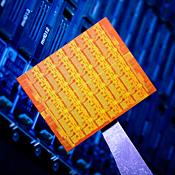 Intel 48-Core CPU
Intel has demonstrated an experimental 48-core processor that reflects a rethinking of the chip design in order to dramatically boost performance and power efficiency in future laptops, desktops, and servers.

Each core in the prototype shown off Wednesday by Intel researchers at the company's Santa Clara, Calif., headquarters is fully programmable and shares data over a high-speed on-chip network. Newly invented power management techniques keep energy consumption to as little as 25 watts and as much as 125 watts when the chip is running at maximum performance. That's about the same amount of power used by today's Intel's processors.

Researchers call the processor a "single-chip cloud computer," because its design resembles the organization of data centers used to support cloud-computing environments that deliver services over the Web.

Cloud data centers comprise tens of thousands of computers connected by a physically cabled network used to distribute large tasks and massive data sets in parallel. Intel uses a similar approach in the experimental processor, which is about the size of a postage stamp. The chip was built using Intel's 45-nanometer manufacturing process.

The high-speed network connecting cores in the experimental chip makes it possible for software to quickly pass information directly between cooperating cores in a matter of a few microseconds, reducing the need to access data in slower, off-chip system memory. Applications can also dynamically manage which cores are used for a given task at a given time, matching the performance and energy needs to the job.

Intel believes adding more cores is the best way to continuously increase processor performance. The company plans to release in 2010 a six-core processor codenamed Gulftown. The 32-nm processor will be based on Intel's upcoming Westmere microarchitecture.

"With a chip like this, you could imagine a cloud datacenter of the future which will be an order of magnitude more energy efficient than what exists today, saving significant resources on space and power costs," Rattner said in a statement. "Over time, I expect these advanced concepts to find their way into mainstream devices, just as advanced automotive technology such as electronic engine control, air bags, and anti-lock braking eventually found their way into all cars."

However, the speed at which processors with dozens of cores are adopted will depend on how fast programmers can develop software that takes advantage of the chips, which will require new development tools that simplify the complexity of building applications for such advanced technology.