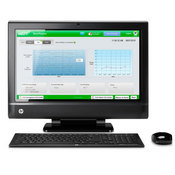 Hewlett-Packard has redesigned its TouchSmart PCs, adding a 60-degree reclining display to make the all-in-one computer more comfortable to use.

HP introduced Monday a consumer and a business model. Both have the new 23-inch display that can tilt back 60 degrees or forward 5 degrees, as well as swivel from side to side. The systems include a wide-angle LED-backlit LCD screen.

Previous TouchSmart models required users to extend their hands straight out, which can become tiring over long periods of using the PC's touch screen. The new systems let users vary the angle and make it possible to work with the screen much closer to a prone position.

The new TouchSmart 9300 Elite Business PC is targeted at customer-facing operations in the hospitality, retail, and healthcare industries. The system can be configured to meet a variety of workplace preferences, such as desk or counter positioning, wall mount or kiosk placement. The systems will be available with Intel's second-generation Core processors, Windows 7, 16 GB of memory and optional 160 GB solid-state drive. The system is also available with a Webcam and facial recognition software for security.

HP plans to release the 9300 Elite to retailers in May in the United States. Pricing will be announced closer to the release date.

The TouchSmart 610 Consumer PC includes touch-optimized applications for accessing Web services, including Hulu, Netflix, Rhapsody, and Twitter. The system also includes HP's LinkUp application for wirelessly connecting a notebook PC to the TouchSmart, which can be used to access applications, files and other content on the laptop. Charges are saved on the notebook to avoid file transfer hassles.

The TouchSmart 610 Consumer is scheduled to be available Feb. 9 at a starting price of $900.

HP has long been a supporter of touch interfaces on all-in-one desktops. The company introduced the first TouchSmart system in 2006, when it sold for a pricey $1,800. Where the first systems used HP-developed software, the new systems take advantage of touch technology within Windows 7.

We welcome your comments on this topic on our social media channels, or [contact us directly] with questions about the site.
Comment  |
Email This  |
Print  |
RSS
More Insights
Webcasts
Unlocking the Ultimate Source of Truth in Cloud Security--Network Data
Don't Miss This Crash Course on Cyber Attackers
More Webcasts
White Papers
DevOps for the Database
2020 Microsoft Advanced Threat Protection Report
More White Papers
Reports
How IT Security Organizations are Attacking the Cybersecurity Problem
The AI and Human Element Security Sentiment Study
More Reports