Resistive Random Access Memory, or ReRAM, is non-volatile memory with lower power consumption and much greater storage capacity than the Flash memory used in mobile phones and MP3 players today. 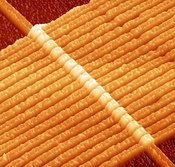 (click image for larger view)
HP, Hynix Semiconductor ReRAM
Hewlett-Packard has partnered with Hynix Semiconductor in developing and manufacturing a new form of computer memory. The joint development agreement announced Tuesday has the two companies working together to bring an HP-developed memristor to market in the form of a future memory product called Resistive Random Access Memory, or ReRAM. A memristor is a circuit element within the memory chip.

The ReRAM is non-volatile memory with lower power consumption and much greater storage capacity than the Flash memory used in mobile phones and MP3 players today. The technology also has the potential of becoming a replacement for hard drives and DRAM system memory used in computers today. ReRAM's potential benefits are due to the use of memristors, which stands for memory resistor, which use even less energy and are faster than current solid-state drives, HP said. Researchers in 1971 identified the memristor as the fourth basic circuit element. HP Labs announced this year that it had discovered that memristors could perform logic, as well as store data.

The discovery is important because future memristor-based devices could change the standard paradigm in computing of having a CPU, or central processing unit, handle computation. Instead, memristors may make it possible to perform logic in chips where data is stored, making systems much faster and power efficient.

"The memristor has storage capacity abilities many times greater than what competing technologies offer," S.W. Park, executive VP and chief technology officer of Hynix, said in a statement.

Under the development agreement, Hynix, a major supplier of memory, will implement HP's memristor technology in its research and development fabrication plant. HP has designed a new architecture within which multiple layers of memristor memory can be stacked on top of each other in a single chip. As a result, the company believes devices incorporating memristor-based chips could hit the market in five years.

Such devices would include handheld gadgets offering 10 times greater embedded memory than exists today. In addition, supercomputers could be made "dramatically faster" than what's predicted in Moore's law. Moore's law, named for Intel co-founder Gordon E. Moore, states that the number of transistors placed on an integrated circuit doubles about every two years. The trend has led to dramatic increases in performance at lower energy consumption in each new generation of microprocessors.