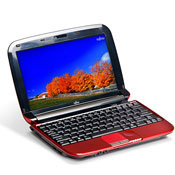 Fujitsu on Monday became one of the first major computer makers to introduce a netbook powered by Intel's latest Atom platform.

The LifeBook MH380 Mini-Notebook features the N450 Atom chip and the new NM10 chipset. The platform features the processor, graphics and memory controller on a single piece of silicon, reducing the overall footprint 60% from the platform's predecessor. In addition, Intel says the latest product reduces average power usage by 20%.

Intel's Atom processor is used in the majority of netbooks shipping today. Netbooks are typically mini-notebooks with screens from seven to 10 inches and cost as little as $300.

The new LifeBook has a glossy, ruby-red casing and weighs just under three pounds at its base configuration. The PC sports a 10-inch diagonal high-definition display, Webcam and standard six-cell lithium-ion power supply with a battery life of seven hours.

The mini-laptop comes with a 250 GB hard drive, 1 GB of system memory and built-in Wi-Fi and Bluetooth wireless support. The device will ship with Microsoft Windows 7 Starter edition.

Fujitsu plans to start selling the LifeBook MH380 next month. Prices start at $449.

Intel's latest Atom platform is expected to boost battery life in netbooks, and make it possible for computer makers to build slimmer machines. However, the new technology is not expected to provide the systems with a significant power boost. Like their predecessors, netbooks with the new platform are expected to offer mostly basic computer functions, such as Web browsing and e-mail.

Nevertheless, netbooks have been the fastest growing PC category during the economic recession. Mobile PC shipments worldwide in the third quarter rose 33.5% from the same period a year ago, with netbooks seeing a 37% gain over the second quarter, according to IDC. Stronger-than-expected PC sales overall in the third quarter is expected to help drive a 1.3% rise of overall shipments in 2009 over last year.