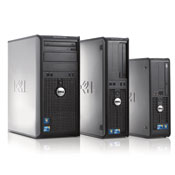 The computer maker's new OptiPlex 780 replaces the 760 and adds a mini-desktop that's 22% smaller than the smallest desktop in the previous series. The new system includes an integrated power supply, rather than an external one common with other mini-desktops.

In addition, Dell on Thursday upgraded the OptiPlex 360 with the 380, which comprises three models, a mini-tower, a desktop, and a mini-desktop. The latter was not available in the 360 line.

In introducing smaller desktops, Dell is targeting space-constrained organizations, such as those found in education and healthcare settings. Cash-strapped schools are packing more students in classrooms, so less room is available for computers, and hospitals are placing PCs on medical carts or under desks, so smaller is a necessity.

"Those are critical things that customers are looking for," Campbell said.

The smallest OptiPlex 780 is 9.4 x 2.6 x 9.3 inches, weighs seven pounds, and is Dell's smallest OptiPlex product. The system is available with Intel's vPro technology for remote systems management and with Intel processor options ranging from a Celeron single-core chip to a Core 2 dual-core processor. The desktop is also available with up to a 320-GB hard drive and a 90% efficient power supply option. The 780 meets Energy Star 5.0 standards.

The mini-system has integrated video support for dual monitors and an optional graphics card to support up to four monitors. The computer ships with Windows 7 and pricing starts at $629.

With the OptiPlex 380 series, Dell is offering a range of Intel processors from a single-core Celeron to a quad-core Core 2. The systems come with Intel integrated graphics and the option of adding an ATI Radeon HD 3450 or an Nvidia GeForce 9300 GE graphics card.