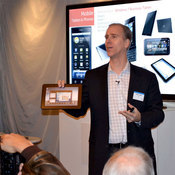 Dell plans to release soon a 10-inch, Windows 7 business tablet and a couple of dozen business computers that make up what the company says is one of its largest-ever introductions of PCs.

Dell introduced Tuesday a refresh of its Latitude notebooks, OptiPlex desktops and Precision workstations. All the systems will be available with Intel's second-generation Core processors, codenamed Sandy Bridge.

Tucked in among traditional PCs is a 10-inch, "business-ready" tablet that Dell is aiming at a number industries, particularly healthcare, manufacturing, and education. The device will have a Sandy Bridge processor, run Windows 7, and have the same security and management capabilities of the company's PCs. The tablet's touchscreen will allow finger and stylus input.

Including the tablet as part of a major release of its traditional business PCs is an indication that Dell is looking to add emerging devices to its core products. "Here's one of the biggest business PC vendors talking about their additional device strategy alongside the PC, as part of a coherent whole," Bob O'Donnell, an analyst for IDC, said in an interview.

Dell is not alone in mixing new types of devices with its core product portfolio. HP's $1.2 billion purchase of smartphone-maker Palm last year is an indication the company is planning to ship tablets and smartphones for business, as well as consumers, O'Donnell said. PC makers Lenovo, Fujitsu, and Panasonic also have tablet strategies, while smartphone makers Motorola, Samsung, LG, and others are building tablets.

"The PC guys are coming down from bigger devices to smaller, and you've got some of the phone guys moving up," O'Donnell said. "That will create some interesting competitive challenges going forward. It's going to be an interesting mix of vendors."

Dell was vague on when it would ship its latest products, saying only it would be in the "coming weeks." A firmer date is not possible at this time because Intel has yet to ship the 6 Series chipsets for Sandy Bridge that will replace the defective chipsets that Intel stopped shipping Jan. 31. A design flaw forced Intel to suspend shipments, which are scheduled to resume in the middle of the month. Analysts have said Intel will need several weeks to bring the number of shipments up to the level before the suspension.

"These things are all planned with the Intel architecture, and we're working with them," David Lord, director of marketing for Dell's business clients, said in an interview.

The biggest design change in the new PCs is in Latitude notebooks. Dell has incorporated aluminum elements in the chassis to make it more durable. Those changes include a brush aluminum back and metal inserts behind the LCD screen that make it 69% more rugged, Lord said. In addition, all the models use the same modular bay that can support an optical drive, external hard drive, or battery. This kind of similarity is expected to make it possible for businesses to buy external components in volume and use them in any of the Latitude systems. "If you know one system, you know them all," Lord said.

The OptiPlex desktops come in four sizes: ultra-small, small, mini-tower, and standard desktop. The Precision workstations include a new entry-level model. The T1600 is the successor to the T1500. The latest system is a single-socket PC designed for 2D and entry-level 3D applications. Customers can choose a Xeon server processor over a Sandy Bridge chip.

Prices will start at $859 for the Latitude notebooks, $650 for the OptiPlex desktops, and $840 for the Precision workstations.