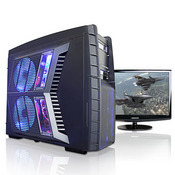 The Radeon 6900 series doubles performance and delivers "flawless graphics for the gaming enthusiast," the company said. The Radeon HD 6970 and HD 6950 graphics cards will be integrated across CyberPower's entire line of desktop gaming PCs, including the Gamer Dragon and Ultra as well as the extreme Fang EVO series, the Baldwin Park, Calif.-based custom computer system maker said.

Customers can configure their CyberPower gaming system with a single 6950 or 6970 card and, depending on the model, have the option of adding more cards. The gaming systems will also feature AMD Radeon 6900-ready compatible hardware and motherboards from manufacturers including Asus, Gigabyte, and MSI and power supplies and cooling options to handle additional GPUs, the company said.

The Radeon 6900 series can be customized with a number of hard drive and/or solid-state drive (SSD), optical drive, memory, and other peripheral components on the CyberPower site. The 6900 systems support high-bandwidth digital content protection (HDCP), HDMI, 3D Blu-ray, and 7.1 digital surround sound. They also support high-resolution flat-panel displays up to 2560 x 1600, CyberPower said.

The gaming systems are all powered by Microsoft Windows 7 64-bit.

The CyberPower Radeon HD 6900 systems retail starting at $849 and come with a three-year limited warranty.