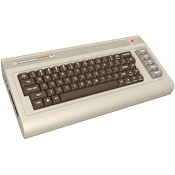 Commodore 64 Replica
For the nostalgic geek, Commodore USA has released a replica of the Commodore 64, a home computer loved by many when it hit the market in 1982 to take on the Apple II and other pioneering systems.

The new C64, available since Tuesday on the Commodore USA website, looks exactly like the original, but with modern-day internal components. Where the original had 64 KB of system memory, quite impressive for the time, today's version sports 2 GB of DDR3 memory, expandable to 4 GB.

The new model also does away with the 1.023-MHz MOS Technology 6510 microprocessor and replaces it with an Intel dual-core 525 Atom CPU and an Nvidia Ion 2 graphics chipset. Other modern components within the classic design include five USB ports and an optional Blu-ray disc player. The price starts at $250 for just the retro chassis; buyers have to install their own motherboard and components. Fully assembled models range from $595, the same price as the original, to $895.

Barry Altman, president and chief executive of Commodore USA, says he didn't plan on selling a replica of the C64 when he bought the Commodore trademark in September 2010 to bring to market a new line of all-in-one home computers.

The company reconsidered about six months ago after receiving lots of email from C64 fans. "We sort of dismissed it as a silly notion that didn't have much legs to grow on," Altman said in an interview Thursday. "The more we were in this and the more we had a presence online, (we saw) the demand was there."

With the original design drawings or manufacturing molds no longer available, the company set out to recreate everything from scratch, with only the insides altered to fit modern components. The new factory mold was created with the help of Motorola, Altman says. "The unit is gorgeous. It looks exactly like the original 64."

While the new machine can surf the modern Web and play online video, it also has a C64 emulator for the diehard fans who still have the original 8-bit games. The system's modern operating system is Ubuntu Linux.

Altman would not say how many units the company has sold but says, "It well surpassed our expectations and we're in our second production run now."

People buying the retro PC are not just middle-aged folks who might still remember the original C64, but teenagers who weren't even born when the original Commodore company filed for bankruptcy in 1994. "Maybe because it's so retro looking and maybe that's a fashionable thing right now," Altman says.

The original C64 went up against two other popular home computers at the time, the Apple II and the Atari 400 and 800. The C64 had sound and graphics performance considered at the time superior to IBM PCs and clones.

From 1983 to 1986, Commodore sold 2 million units a year, dominating the home computer market with a share of between 30% and 40%. The C64 outsold IBM PC clones and Apple and Atari computers.