In adding a faster processor and 10-hour battery to the MacBook, Apple's narrowed the gap between its entry-level system and the MacBook Pro. 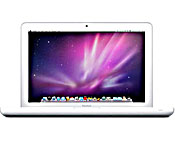 Apple Refreshes MacBook
Apple on Tuesday released an updated MacBook that narrows the feature gap between the entry-level system and the same-size professional model.

The latest model of the 13-inch, white laptop includes a faster Intel processor and Nvidia graphics chip than the previous version. In addition, Apple has boosted the battery life to up to 10 hours.

Specifically, the new system includes a 2.4-GHz Intel Core 2 Duo processor and an Nvidia GeForce 320M GPU, which boosts performance by up to 80% over the previous MacBook, according to Apple. In addition, the plastic, unibody laptop comes with 2 GB of system memory and a 250-GB hard disk drive.

In updating the system, Apple kept the price at $999, narrowing the feature gap with the 13-inch MacBook Pro, which starts at $200 more. Among the major differences in the MackBook Pro is the aluminum unibody, 4 GB of memory, a FireWire 800 port, and an SD card slot. The Pro model is also available with more options. Both systems have LED-backlit glossy widescreen displays.

Apple updated the MacBook a little more than a month after refreshing the MacBook Pro line. The MacBook Pro 15- and 17-inch models got the biggest performance boosts with Intel Core i5 and i7 processors. In addition, the systems got more graphics power with a GeForce GT 330M.