VMware CIO Bask Iyer describes his role as both representing customers' needs to top management and validating the firm's products to customers.

Bask Iyer, the new CIO at VMware, says his job lies at the intersection of his firm's release of new products and their adoption by customers. As the CIO he's often called to vouch for those products by citing the fact that VMware itself is using them. He also makes his staff responsible for talking about how that's working out.

In some quarters, it's called "eating your own dog food," a phrase popularized by Dave Cutler at Microsoft while leading the Windows NT development team in 1991. Iyer prefers saying, "drinking our own champagne." He uses VMware's vCloud and vSphere suites of products throughout an IT operation that includes support for a large body of software developers working on VMware products, plus a 1,000-person IT staff.

Iyer has been in the job a scant nine months, but he was ready to talk about his priorities during a visit to InformationWeek Jan. 21. Iyer replaced former CIO Tony Scott after Scott was tapped last February by the Obama administration to become the next federal CIO in Chief. (Scott is the third federal CIO. His predecessors were Vivek Kundra and Steve VanRoekel.) 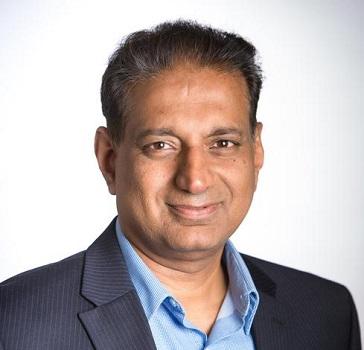 Iyer, a confident, gregarious figure, spoke freely despite the fact that VMware may be facing staff cutbacks of 900 personnel in advance of the acquisition of EMC and VMware by Dell, according to both Fortune and Bloomberg in reports published Jan. 22, after Iyer's visit.

"Tony Scott is a customer of ours," Iyer pointed out. "I know a lot of CIOs personally. We (the IT staff) can give feedback on every product we make." Iyer said he spends 30% of his time meeting with customers, and "it brings more credibility to VMware."

Iyer has assumed a share of external relations as part of his CIO job. He makes available the IT staff members responsible for the operation of particular products, even though "they're not dressed for it." He's found "it doesn't matter how they're dressed. Customers want to talk to the people who run the cables and administer the servers."

Iyer gets no sales commissions, and sometimes he gets grief. "Customers will tell me what they don't like about the product before they'll tell another VMware executive," he noted, and he conveys that information back to the development side of the house. But often, as a result of a successful deal, he receives a bottle of wine from the customer's account representative. "I've got a lot of bottles" stored in the wine cellar, he said.

One thing the VMware IT staff can't help customers with is the sometimes difficult implementation of OpenStack for internal or private cloud operations. VMware produces its own version, VMware Integrated OpenStack, and is a contributor to the project's virtual networking component. But it is not an implementer of OpenStack itself, even though Iyer has experience with the task from an earlier implementation he was involved in while CIO at Juniper Networks. VMware will provide professional consulting services to customers for an implementation, of course.

If you want to build an OpenStack cloud "yourself with completely open source code, then you'll want to have a super-duper team to do it," he advises.

One issue on which he has an instant rapport with other CIOs is finding and retaining staff. "I'm in the Silicon Valley, competing with everyone for valuable people. Every company is competing for millennials, the younger generation embedded in the smartphone and transitional, digital economy. They want to use their own phones and they want a quick response when they request a server for a project." Iyer said that rapid provisioning comes from VMware's use of its own private cloud and its integration of multiple phone models from its use of VMware AirWatch.

"Telling new hires, 'You will use this,' or, 'You will use that.' That's not going to work," Iyer said. "It's a challenge, but I look at it as very exciting." The company offers five to ten applications for mobile users and needs "30 by the end of the year," said Iyer. Email and VMware's Socialcast, an answer to Salesforce's Chatter application, are two of them. A mobile app providing employees with a map of facilities, particularly meeting room locations and navigation to get there, is in demand, he noted.

"The data center (operations) and private cloud teams are very small. We have to rely on highly automated operations," he said. But he acknowledges that VMware itself, while talking about the software-defined data center, is still working on implementing one itself.

How much of VMware's data center operations are virtualized or software-driven operations? "I'm struggling to come up with a number," conceded Iyer. (Perhaps his short tenure in the job was catching up with him during the interview.) He noted that 60% of his staff is involved in software development for the company, versus 40% for operations.

At VMware, the CIO "is viewed as the voice of the customer," which is a special status that Iyer takes quite seriously. But he's wary of spending any more of his time on external relations. He has plenty of internal customers to worry about.

"You can't forget what your operational day job is. You have to earn your place at the table."

Charles Babcock is an editor-at-large for InformationWeek and author of Management Strategies for the Cloud Revolution, a McGraw-Hill book. He is the former editor-in-chief of Digital News, former software editor of Computerworld and former technology editor of Interactive ... View Full Bio
We welcome your comments on this topic on our social media channels, or [contact us directly] with questions about the site.
Comment  |
Email This  |
Print  |
RSS
More Insights
Webcasts
Protecting Your Enterprise's Intellectual Property
5 Steps to Solving Modern Scalability Problems
More Webcasts
White Papers
How to Prioritize Risk Across the Cyberattack Surface
Cyber Threats & Trends: Jan-June 2020
More White Papers
Reports
Are Unprotected Cloud Databases Leaking Your Data?
2020 State of Cybersecurity Operations and Incident Response
More Reports

Thanks for reassuring those of us at much smaller organizations that CIOs face the same challenges in big organizations. You would think VMware would be far more virtualized than 60%, but the switch takes time and coordination, even when one is implementing the tools it builds and sells to customers.
Reply  |  Post Message  |  Messages List  |  Start a Board

@jagibbons, interesting point, I trust you are right... but this days changes do take longer time than planned
Reply  |  Post Message  |  Messages List  |  Start a Board

Just about every change seems to take longer than planned. Probably more an issue of overly optimistic planning than growing complexity.
Reply  |  Post Message  |  Messages List  |  Start a Board

@jagibbons, sometimes I wonder if people in the board rooms living in they own reality... as in the field is not the same...
Reply  |  Post Message  |  Messages List  |  Start a Board

Jagibbons, 60% of the IT staff at VMware is devoted to development vs. the 40% dedicated to operations. The 60% is not related to the degree of virtualization. I suspect a very high percentage of servers are vitualized there, and Iyer did say 100% of data center management is from a virtualization management console. But not all the data center networking is virtualized and would need to be for VMware to have a full, software-defined data center, the topic of his comment.
Reply  |  Post Message  |  Messages List  |  Start a Board

@Charlie: Would the 40% of the staff be engaged in operational support on customer level? Or, does this represent 40% of the staff involved in supporting internal users (both IT and non-IT)?
Reply  |  Post Message  |  Messages List  |  Start a Board

Tzubair, 40% of IT staff dedicated to internal IT operations, if I understand your question. But there's no distinction between those employed for performing internal IT and those who are tapped occasionally to speak with customers. They're all internal-facing IT, who hit pause every now and then to spend time with a customer. They have particular operational expertise with a product.
Reply  |  Post Message  |  Messages List  |  Start a Board
Editors' Choice
Hot Topics