Google for years has assembled its own server hardware in order to operate at scale efficiently. Now it appears the company has customized networking silicon.

Google did not respond to a request for comment.

In response to a question seeking further details on the LLVM mailing list, Google software engineer Chandler Carruth said, "This is internal hardware for us, so there's not a lot we can share, and you can't really grab a version of the hardware." 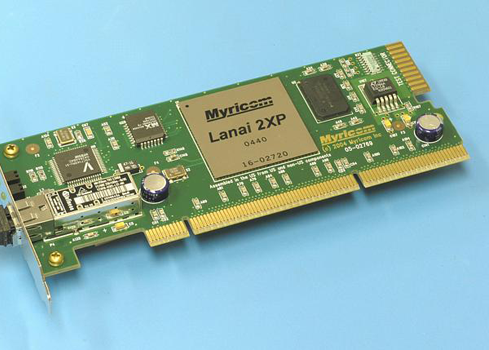 Networking company Myricom, acquired by CSP in 2013, makes a network adapter with a chip called Lanai that's designed for parallel processing. In the past, the chip has been referred to as "LANai," a variation in capitalization that suggests support for both networking and artificial intelligence functions. CSP did not respond to a request for comment.

Google, meanwhile, has acquired a considerable portion of Myricom's engineering talent. Nan Boden, once CEO of Myricom, is now a director of engineering at Google, along with at least eight former colleagues, including former Myricom CTO Jakov Seizovic.

A 2002 paper from the the French Institute for Research in Computer Science and Automation (INRIA) describes the LANai processor as suitable for a network architecture designed around an "oversimplified, dumb, and performant core, with potential 'intelligence' at the edges of the network thanks to programmable processors."

Presumably, Google's custom networking processors can be used for network interconnection to increase data center efficiency through software-defined functions. They may also provide some security benefit, given concerns about the extent to which national intelligence agencies covet knowledge of vulnerabilities in commercial network hardware. Myricom currently suggests its networking adapters are well-suited to efficient packet sniffing and video streaming.

A report in The Register indicates Google has been developing low-latency code for its network hardware to accelerate memcache workloads. Memcache, a distributed memory caching system, stores data in memory to reduce the number of times data needs to be read from a database.

Given the scale at which Google operates, even small optimizations can lead to significant savings. This explains the company's interest in custom hardware.

According to Bloomberg, Google purchases as many as 300,000 chips for its custom servers every quarter and has encouraged Qualcomm's efforts to enter the server chip market, currently dominiated by Intel.

Thomas Claburn has been writing about business and technology since 1996, for publications such as New Architect, PC Computing, InformationWeek, Salon, Wired, and Ziff Davis Smart Business. Before that, he worked in film and television, having earned a not particularly useful ... View Full Bio
We welcome your comments on this topic on our social media channels, or [contact us directly] with questions about the site.
Comment  |
Email This  |
Print  |
RSS
More Insights
Webcasts
Building the SOC of the Future: Next-Generation Security Operations
Making Cybersecurity Work in Small and Medium-Sized Businesses
More Webcasts
White Papers
How to Prioritize Risk Across the Cyberattack Surface
Managing OTT Content Distribution in the Connected World
More White Papers
Reports
The Malware Threat Landscape
Special Report: The Changing Face of Threat Intelligence
More Reports

It has long been known that Google doesn't want to pay high chip prices from Intel. This is why it is trying to convince Qualcomm to get into the game.

The problem is manufacturing, something Qualcomm doesn't necessarily want to do. It's really interesting to follow what Google is doing with this though, as I think they have a bigger impact on the hardware marketing than most people realize.
Reply  |  Post Message  |  Messages List  |  Start a Board
Editors' Choice
Hot Topics

10 IT Trends to Watch for in 2021 Cynthia Harvey, Freelance Journalist, InformationWeek,  12/22/2020
White Papers
How to Prioritize Risk Across the Cyberattack Surface
Passwordless: The Future of Authentication
Ahead of the Curve: Accelerate Cyber Response with DNS Insights
Transforming the Corporate WAN: Enterprise Network Insights
Threat Intelligence Solutions: A SANS Review of Anomali ThreatStream