Amazon continues to expand its worldwide network of data centers, with Montreal, the UK, China, and India all slated to become part of its chain.

Amazon is locating its next data center at a site that offers inexpensive power, which also allows the company to keep to its pledge to support renewable energy.

Scheduled to open later in 2016, its next cloud region will be near Montreal, home of Hydro-Quebec -- the world's largest producer of hydro-electric energy. It will be its fifth North American location, with a sixth also coming in 2016 in central Ohio, running in part on energy provided by a Paulding County wind farm currently under construction.

The Montreal and Ohio data centers are listed as "coming soon" on this inventory of AWS regions.

Microsoft, Facebook, and Amazon have previously built data centers in the Pacific Northwest, where the Columbia River system and other sites produce plentiful hydro-electric power. Five years ago, Yahoo opened a data center in Lockport, N.Y., near Niagara Falls, still a major hydro-electric generator in a region with a declining industrial base. 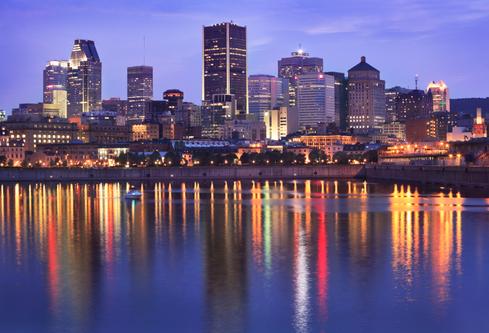 In 2013 Facebook opened a data center in northern Sweden at Lulea, operating on hydro power available there.

Google is believed to have started the trend, coming up with innovative, energy-efficient designs for its search engine data centers, then pledging to use renewable resources -- moves that others have copied. Apple, Yahoo, eBay, and Amazon have all followed suit. Facebook's Mark Zuckerberg has been the most public about his firm's commitment to green energy and efficient data center design, putting its plans in the public sphere via the Open Compute Project. As measured by the Power Usage Effectiveness standard, Facebook data centers use about half the power of a typical enterprise data center in an urban setting.

If every knowledge worker in the US moved to cloud services, total energy consumption for IT purposes would be reduced by 87%, according to Green Data Center News.

Amazon now has data centers in 12 regions around the world with three more to be added overseas in 2016. It's planning to expand into Slough, a popular data center location in the UK. It will add facilities in Ningxia, China, and at an unnamed location in India.

Amazon's popular US East location in Northern Virginia is the only region to offer five availability zones or choices of facilities with their own power and telecommunications links. Customers are urged to back up their data to a second availability zone at a given location, which would allow a company to survive and be available in the event of a power failure or other outage in one availability zone.

The US West region in both Oregon and Northern California each have three availability zones.

The new Ohio region, dubbed US Central, is likely to have three zones, since Amazon is building data centers in Hilliard, Dublin, and New Albany, Ohio -- all suburbs of Columbus.

At the end of 2015, Amazon had 12 regions around the world with a total of 32 availability zones. In 2016, the Amazon cloud is headed toward 17 regions and a still unspecified number of zones.

Charles Babcock is an editor-at-large for InformationWeek and author of Management Strategies for the Cloud Revolution, a McGraw-Hill book. He is the former editor-in-chief of Digital News, former software editor of Computerworld and former technology editor of Interactive ... View Full Bio
We welcome your comments on this topic on our social media channels, or [contact us directly] with questions about the site.
Comment  |
Email This  |
Print  |
RSS
More Insights
Webcasts
What We Can Learn from Sports Analytics
ROI and Beyond for the Cloud
More Webcasts
White Papers
How to Prioritize Risk Across the Cyberattack Surface
Passwordless: The Future of Authentication
More White Papers
Reports
The State of Threat Detection and Response
The Malware Threat Landscape
More Reports

Bricks and mortars proximity, formerly a measure for retail chains, is now active in the cloud. If you are not offering a data center close to the population you wish to serve, someone else may capture that business. It's the advantage of reduced latencies.
Reply  |  Post Message  |  Messages List  |  Start a Board
Editors' Choice
Hot Topics