Jakob Carnemark, who has built data centers for eBay and IBM, foresees the day when his firm, Aligned Energy, places a box inside a heat-intensive manufacturing plant on the same electrical grid that his data centers are using.

The box contains a turbine that's powered by a boiling liquid. But, unlike most electricity generators, it's not relying on steam from water. It's relying on a proprietary liquid with a lower boiling point -- something like alcohol. It can put the waste heat of a steam power plant to use making more electricity.

The waste heat might be 190 degrees Fahrenheit, instead of the 212 degrees required to boil water, but it powers the turbine in the Aligned Energy box just fine. If there's enough energy-intensive industry on the same grid as his data center, Carnemark replaces all the power that his data center is consuming through waste heat.

The box is produced by an Aligned Energy partner Climeon, a Swedish firm that came up with what it terms its Heat Power technology, which capitalizes on waste heat. 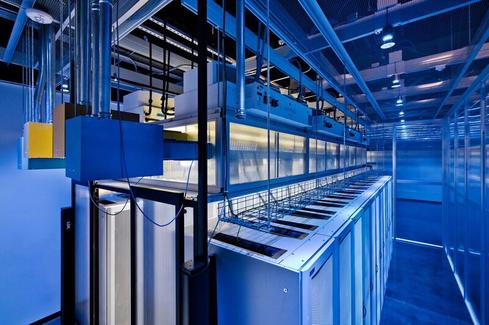 "We're bringing a new tool into the market," said Carnemark in an interview with InformationWeek. "If I put a small box in a steel mill, grabbing their waste heat, nobody is going to complain about that."

While Aligned Energy has built two data centers, the company has yet to align its operation with waste-heat power generation in such a manner.

However, Carnemark said that is the goal, and he is working with the public utility suppliers in Plano, Texas, and in Phoenix, where a second data center is due to go online in early 2017, to find waste-heat generation partners on the grid.

The utilities themselves are potential partners through their generation plants.

Carnemark thinks the digital economy will one day be powered by data centers that are neutral in terms of environmental impact.

Data centers are currently consuming between 2% to 3% of the electricity generated in the world, according to Carnemark's estimate. In the future, data center owners will want to say whether their operations are carbon neutral. It may become a competitive factor in various industries to be able to claim such a stance in the environment.

Wind farms, hydropower, and solar panel fields are recognized sources of renewable energy. As Climeon's Heat Power approach gains acceptance, it is likely to take its place as another, Carnemark said.

Data center owners are already using data center design efficiencies plus green energy sources to minimize their environmental footprint. Amazon built a wind farm in Indiana before opening its new Columbus, Ohio, region as part of its US Eastern complex.

Microsoft, Apple, and Google are also competing for the title of who can build the most carbon-neutral data center.

Meanwhile, Carnemark has implemented a cooling system in Aligned's data centers that reduces the need for power. The Cactus Cooler system is a departure from the normal chiller/forced-air approach to data center cooling. It places a passive heat sink above the server rack, which absorbs the rising heat, and then, via a thermal bus, moves it outside.

The bus contains a dual pipeline containing a liquid that absorbs the heat from the sink and releases it at a discharge point to the ambient air out of doors. Through minimal compression, the gaseous liquid enters a new heat collection cycle and repeats the process in a closed loop.

The Cactus Cooler has been working in its Plano data center for a year and will be part of its Phoenix facility early next year.

The Cactus Cooler is made up of modular units that can be added as each rack of servers is added to the data center. "You can add conductive cooling units as they're needed," Carnemark said.

The Aligned thermal bus system can remove enough 95- or 100-degree heat coming off equipment to keep the air temperature in the data center at 75 degrees, said Carnemark. In temperate climates, it uses one third the energy of a chiller or cool-air system to do so, he said.

Such a thermal bus process avoids the fans, filters, and chillers of an air-cooled approach.

It also avoids the water consumption that large data center facilities frequently rely on, including cooling towers, where warm water cools through evaporation. A large, cloud data center complex "with cooling towers uses 200 million gallons of water a year," he said. That's an issue in California, where Aligned plans to build one of its next data centers, and in other hot and dry parts of the world.

Prior to founding Aligned, Carnemark had 25 years of experience in the construction business. He was formerly the senior vice president of Skanska AB's Mission Critical Center of Excellence. Aligned data centers are designed to serve large enterprise or cloud-service-provider customers, and they're geared toward lower operating costs and flexible operations.

Carnemark said it's a goal of an Aligned data center not only to minimize its environmental footprint, but also to offer customers "a data center-as-a-utility," where customers pay only for the space, electricity, and cooling that they use.

"We create tunable infrastructure," he noted. The amount of data center used can expand or contract with the customer's needs.

Telus, the Canadian telecom company, said that the units helped reduce its electricity consumption at a new Aligned-built British Columbia data center by 80% compared to a typical predecessor data center.

An Aligned data center customer may "pay for use," rather than sign a long-term contract for a set amount of space, power, and cooling.

[Learn more about how data centers are cutting energy costs.]

Aligned's data centers enjoy a power-usage effectiveness rating of 1.15, compared to the typical enterprise data center's 2.0 or above. The rating compares the total amount of electricity consumed versus what's needed for the computing and networking equipment. A 2.0 rating means the data center operation consumes double the electricity needed by the equipment alone.

In other words, the lower the PUE number, the better. Facebook claims a PUE of 1.06 or 1.07 for its Prineville data centers. However, they cool through an evaporative system, not through chillers, in a high desert climate where the process works efficiently.

Carnemark said Aligned wants to help companies get data center service in locations where they or their customers are located. Those locations minimize the performance latencies caused by distance, which some businesses can't tolerate easily.

Unlike Facebook, the company can't build in Prineville, Ore., or in Malmo, Sweden, above the Arctic Circle.

Aligned Energy is a new player when it comes to data center construction, backed by venture capital. It needs to find intensive, waste heat producers -- smelters, steel plants, pulp and paper mills, and electricity generation stations -- at which to deploy its Heat Power electricity generators. Perhaps they could also be used at stockyards, where there's a surplus of methane as cattle manure gets decomposed. Electricity is easier to capture and transport than methane and there's a ready market for it.
Reply  |  Post Message  |  Messages List  |  Start a Board
Editors' Choice
Hot Topics