50%
Tweet
Even with cloud, companies don't want to give up their internal data centers. Why do data centers have such staying power? 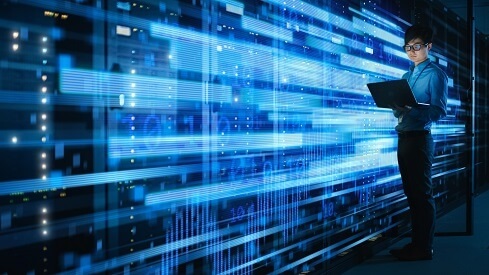 Industry "started with mainframes, then we went to standalone servers, and then cloud was a big thing," said Peter Tsai, a senior technology analyst at Spiceworks, an IT community forum.  "Now it seems like we're pulling computing resources back, closer to where they're needed.”

Indeed, internal data centers are not going away -- even as enterprises are outsourcing more IT to the cloud. The result has been a hearty embrace of hybrid computing, where some IT assets are outsourced to the cloud and others are maintained within corporate walls.

COBOL skills are now in demand as enterprises struggle with aging IT work forces at a time when they need to maintain a plethora of mission-critical applications that were written as long as 60 years ago.

Many of these programs haven’t failed in 60 years, either. Their mission-critical processing includes the invocation of “black box” routines that run flawlessly but are undocumented and unknown for what they actually do.

The need to maintain existing systems extends beyond the use of custom and unknown black box code that performs flawlessly. There are also many legacy systems like ERP that deliver “tried and true” business value.

Almost every ERP vendor now offers cloud-based versions of their systems, so the choice for enterprises becomes: do you move to a generic version of ERP on cloud, or do you choose to maintain your  30- and 40-year-old system with proprietary code that gives your company a clear, competitive advantage?

Many choose the latter -- and keep their internal data centers going.

In the Spiceworks survey, it was noted that “on-premise technology remains on business technology buyers' roadmaps for the foreseeable future, but end-of-life events can direct investments.”

That same survey concluded that “one-third of organizations buy new servers because of the end of life for a server’s operating system.” For instance, Microsoft dropped extended support for Windows Server 2008 in January 2020, and followed by dropping support for SQL Server 2008 in July 2020.

While system sunsetting events do trigger companies to reinvest, many don’t always do this promptly. Instead, they seek out third-party support options or perform support internally so they can keep these systems running on premises.

In other cases, companies opt to try something new, such as moving to the cloud.

Several years ago, I was consulting to a financial services company that elected to move their Microsoft servers to the cloud. At the same time, the company decided to buy new on-premises servers and licenses so they would at least have failover capability if the cloud failed them.

The end result was a hybrid computing mix of cloud and on-prem systems that assured management that they were saving some money by moving to the cloud, but also had failover control over their systems since they still had internal systems that could step in.

If you have proprietary code in your systems that gives your company a competitive advantage, systems that contain irreplaceable intellectual property that you don't want to risk data breaches on, and security requirements that make you hesitant to use any IT resources that are not under your direct control and management, hosting these assets in an internal data center makes the most sense.

Most companies are moving to a hybrid computing model, which is a mix of on premises and cloud-based IT.

The value of a hybrid computing approach is that it gives organizations agility and flexibility. You have the option of insourcing or outsourcing systems whenever there is a business or technology need do so.

By adopting a hybrid strategy, companies can also take advantage of the best strategic, operational and cost options. In some cases, a “best choice” might be to outsource to the cloud. In other cases, an in-house option might be preferable.

Here is an example: A large company with a highly customized ERP system from a well-known vendor acquires a smaller company. Operationally, the desire is to move the newly acquired, smaller company onto the enterprise in-house ERP system, but there are so many customized programs and interfaces that the company decides instead to move the new company onto a cloud-based, generic version of the software.

The advantage is the newly acquired company gets acclimated to the features and functions of the ERP system.

Going forward, the parent company has the option of either migrating the new company over to the corporate ERP system, and being able to perform this migration without being rushed, or deciding to join the newly acquired company by migrating enterprise ERP to the cloud .

Many companies opt to retain an in-house presence for their mission-critical systems at the same time that they replicate these systems on the cloud.

One reason to replicate systems on the cloud is to provide a readily available “sandbox” that application developers can provision on their own for testing applications without having to wait for the DBA to create a test database. Failover flexibility is another reason that companies use both cloud-based and on-prem versions of their mission-critical systems. By running these systems in tandem, enterprises can failover systems to on prem if the cloud fails, or failover to cloud if on prem systems fail.

Financial services, life sciences, insurance, hospitality, manufacturing, technology and healthcare companies all have powerful reasons to keep their intellectual property, algorithms code and data under direct management in their data centers. Although many cloud services have robust security, IT departments don’t always take advantage or trust these security measures. And while there are instances of hacks into corporate systems as well as into the cloud, CIOs, CEOs and corporate boards all feel better if they are in direct control of proprietary software and data that give their companies unique competitive advantages in the marketplace.

The agility and pay-per-use features of cloud computing have benefited companies by eliminating the need for expensive capital expenditures in data centers and in many cases (for SMBs in particular) by reducing the need for IT personnel to manage corporate systems.

Yet despite the move to the cloud, the importance of leaving some of the most critical systems and infrastructure in data centers continues.

For more on physical data centers vs. cloud, follow up with these articles:

How to Plan Today for Tomorrow's Lights-Out Data Center

How Cloud is Transforming the Data Center

Mary E. Shacklett is an internationally recognized technology commentator and President of Transworld Data, a marketing and technology services firm. Prior to founding her own company, she was Vice President of Product Research and Software Development for Summit Information ... View Full Bio
We welcome your comments on this topic on our social media channels, or [contact us directly] with questions about the site.
Comment  |
Email This  |
Print  |
RSS
More Insights
Webcasts
Using Artificial Intelligence, Deep Learning and Machine Learning for Cyber Defense
[Dark Reading Virtual Event] Your Crash Course on Cyber Attackers
More Webcasts
White Papers
Cloud Threat Report: Spring 2020
The Best Free Vulnerability Management Tools
More White Papers
Reports
Special Report: Edge Computing: An IT Platform for the New Enterprise
The State of IT and Cybersecurity Operations 2020
More Reports