Developers who create cloud-based services and resources for the enterprise got a look into the minds of a few banking and investment companies at last month’s New York Enterprise Tech Meetup. At the event, a panel convened on "Modernizing IT Infrastructure" with Sara Castellanos, reporter with the Wall Street Journal, moderating. It was a chance to hear about the considerations some financial organizations face when advancing their plans to leverage the cloud for infrastructure transformation, which can run into internal and external obstacles.

Along with the other speakers, Whitston said the human factor remains a significant component in the transformation equation. "How do you get your own people to change?" she asked. That includes refreshing the culture that guides teams as well as their skillsets. She also said that from her perspective it can be more efficient to buy new IT when possible rather than commit internal resources to development. That can include working with startups that offer resources that speak to core banking needs. "You build it only when it's absolutely, completely differentiated capabilities," Whitston said. She cited that it is possible to use IaaS, SaaS, and subscription-as-a-service to get to market quickly with the right underlying architecture.

Murphy said his firm's greatest challenge is finding people with the right skills to take advantage of all the capabilities of the cloud. It is not a matter of simply rushing to the cloud, he said, for the sake of being there. "I think that lift and shift is a really bad idea," he said. 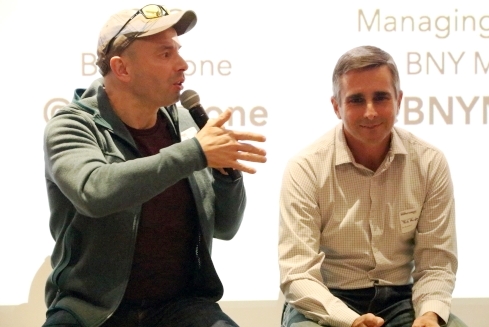 Many organizations, Murphy said, want to tell the world they are in the cloud for the sake of optics and claim victory, but many corporate technology teams wind up saddled with debt in the process. That is a less than ideal outcome he wants to avoid. "They want to move over, so they can get some sort of mythical win at the end of the year," he said. "We're really resisting that and trying to do it right. But in order to do it right, we need great people ... who think three steps ahead about what we're going to need in the future."

Another concern can be lofty expectations brought to the table by executive leadership that might not grasp all the sweat equity required for transformation. "It's a journey and you need to convince them to overinvest for a period of time -- but no one wants to hear that," Murphy said. "They want immediate efficiencies. Technologists need to be strong enough to fight back against tremendous pressure from business folks."

There is clear desire, he said, to streamline the process of reaching new innovations faster. "Anything that can shrink down that complexity and create development velocity is interesting," Murphy said. "We don't want to spend time on DevOps stuff. We want to spend time on business value creating applications."

Mercone echoed some concerns about organizations only focusing on assumed swift outcomes of cloud transformation and not the real work that must be put in. "There is a lot of chasing the shiny object with the thought, 'I'm going to retool; I'm going to build my own CI/CD [continuous integration–continuous delivery]; I'm going to do data clusters.' Congratulations -- you've made it to the starting line," he said.

As organizations form cloud transformation strategies to modernize their infrastructure, Mercone said they should weigh some key considerations. "Do they have some concept of model-driven deployment?" he asked. If it takes a herculean effort to reconstitute a running application, whether it is a legacy app or modern 12-Factor app, there may be a need to change the organizations processes. "Do you have it sufficiently descripted in machine-readable format that even if it's legacy, you can redeploy it?" he asked. "If you've got that, then you've prepared yourself to be more operationally efficient on-prem and you've met the first milestone for what it means to operate in the cloud."

Joao-Pierre S. Ruth has spent his career immersed in business and technology journalism first covering local industries in New Jersey, later as the New York editor for Xconomy delving into the city's tech startup community, and then as a freelancer for such outlets as ... View Full Bio
We welcome your comments on this topic on our social media channels, or [contact us directly] with questions about the site.
Comment  |
Email This  |
Print  |
RSS
More Insights
Webcasts
Keys to Better Cyber Risk Assessment
SASE: The Right Framework for Today's Distributed Enterprises
More Webcasts
White Papers
CPRA: The Simple Guide
Annual Cybercrime Report
More White Papers
Reports
We Need Your Input: Trends in Workforce Optimization
Trustwave Global Security Report
More Reports