Steve Herrod, former CTO of VMware, said the success VMware has enjoyed in converting parts of IT operations into the software-defined data center can be followed up by young companies that fill in specific areas and enlarge its success.

That's a good point of view for a man who left VMware's CTO role in early 2013 and is now managing partner of venture capital firm General Catalyst Partners. In an interview, he said he still finds it exciting to think about the possibilities as he is exposed to the gains virtualization has made in the data center.

But he also doesn't hesitate to pull in lessons from other previous experiences, including the one in which he participated in "a spectacular failure." That would be the time shortly after he graduated from Stanford when he led a software team at Transmeta. The firm was attempting to build a low-energy-consuming software processor that could replace Intel x86 chips. Linux developer Linus Torvalds worked there for part of the same period and the two shared an office. As Transmeta fiddled with iterations of its software CPU, Intel drove down the power consumption of its chips.

One lesson: "I guess it doesn't pay to compete with Intel in x86 processors," he chuckled.

The era in which virtualization got its start was primarily a period of Web ascendance, when people learned to interact with websites. Now "mobile is the first and foremost way that companies' customers are going to interact with them. That affects how you train people, what tools you use for applications, how you test, and how you release software," he noted.

"Mobile will be dominant. I don't think people grasp that yet," he said. Google acknowledged this with its June acquisition of Appurify for testing mobile apps, he said. 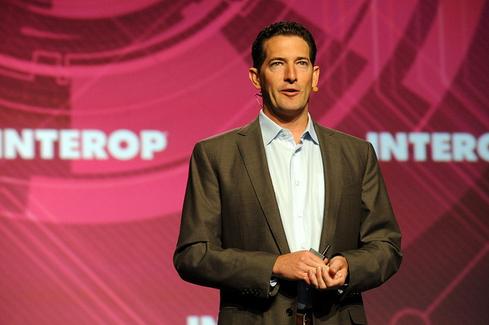 Steve Herrod speaking at Interop in 2012.

In addition to tools and applications, companies need to worry about having in place "very formal API structures" to manage the creation of mobile app APIs that may be used by thousands or hundreds of thousands of customers.

One of the companies that he's advised General Catalyst to back is Runscope, which specializes in automated testing of mobile app APIs. "Runscope is a company that is trying to help companies build APIs and make sure they're robust," he said, and such companies are going to be "the picks and shovels of the new economy."

Other startups that General Catalyst is backing at his suggestion are Illumio, still in stealth mode, and and Datto, a Connecticut-based business continuity solution vendor.

That was as much as he cared to disclose about some of his early picks, and they probably don't represent the full list.

In general, he said, he's trying to bring a technologist's point of a view, of one who's already seen several fundamental changes in the industry, to an investment firm that's prepared to take chances on small companies that can bring additional changes and capitalize on them.

There will have to be developments in mobile application and API security and the movement of secure data, he believes.

While he's still a believer in strong virtualization management systems, he acknowledged Linux containers "will also have a role to play. There are reasons to run them inside a virtual machine. There are reasons to run them natively" on a bare-metal server, depending on what IT is trying to accomplish. "It's kind of wild how much attention they've gotten over the last few months," he added.

Whichever way it goes, he said, "I'm loving life as a technologist first, venture capitalist after. We're in a very exciting time in IT infrastructure." The successful company of the future won't necessarily be just a Windows company or a Linux company, an on-premises software company, or a cloud software company.

Instead, there will be different forms of computing meeting enterprise needs and the challenge will be "how to manage these different islands of computing. I like companies that solve heterogeneous problems," he said.

Charles Babcock is an editor-at-large for InformationWeek and author of Management Strategies for the Cloud Revolution, a McGraw-Hill book. He is the former editor-in-chief of Digital News, former software editor of Computerworld and former technology editor of Interactive ... View Full Bio
We welcome your comments on this topic on our social media channels, or [contact us directly] with questions about the site.
Comment  |
Email This  |
Print  |
RSS
More Insights
Webcasts
Securing and Monitoring Networks in the 'New Normal'
Strategies for Success with Digital Transformation
More Webcasts
White Papers
Top Threats to Cloud Computing: The Egregious 11
The Insecure State of Microsoft Teams Security
More White Papers
Reports
2020: Threats in Review
Evolution of Ransomware Gangs
More Reports

One lesson: "I guess it doesn't pay to compete with Intel in x86 processors," he chuckled.

I almost chuckled too but not because you can't compete with Intel, because one thing we don't tend to hear from the tech companies who take off is that timing has a lot to do with their success.  Had VMWare tried to launch 5 years earlier the road would have been much harder.  Hardware wasn't there to do the consolidation the way enterprises wanted to handle virtualization.  We had been fiddling with virtual machines running in emulators long enough that when VMWare started to hit its stride people were already familiar with virtualization but hadn't started building out their entire data center in a virtualized space.  We've seen a lot of products fizzle because they had a great idea but the market wasn't ready for them.   Good leadership can adjust markets and that's a large part of why I think VMWare took off, they jumped into the right market space at the right time and did a lot of driving when it came to defining what a virtualized datacenter looks like.

That's a great question. It's tempting to think mobile is just a smaller version of your Web site. But we're starting to see a lot of activity around more context-aware use cases, like social Wi-Fi or new mobile-based payment systems. Not to mention in-car applications and connectivity, which will give "mobility" a new meaning! On the flip side, context-aware mobility has all kinds of privacy and surveillance issues attached to it. It's going to be interesting times...
Reply  |  Post Message  |  Messages List  |  Start a Board

It's great to hear from Steve Herrod again 18 months after his departure from VMware. In addition to Transmeta, he's also worked at MIPS and SGI before joining VMware. He's stood at the heart of software development teams on a number of fronts. He became VMware's 90th employee, if I remember right. For a while, he was VMware's best spokesman for the software-defined data center.
Reply  |  Post Message  |  Messages List  |  Start a Board

I think we do grasp that mobile will be dominant. What we haven't done is translate that into action -- what do we need to do differently because of mobile's dominance.
Reply  |  Post Message  |  Messages List  |  Start a Board
Editors' Choice
Hot Topics