Ryan Floyd, a founding partner and managing director of the early stage venture capital firm, Storm Ventures, says the future is sassy -- or as he would spell it, SaaS-y -- filled with software-as-a-service opportunities.

Floyd spoke at a May session during the Cloud Connect track of Interop 2016 in Las Vegas. His firm recently created a new $180 million fund, and some of its favorite targets are startups entering the SaaS field.

"The IT buyer today is the business buyer," said Floyd to a roomful of attendees. Salesforce figured out how to get inside a business and sell online-automation directly to its sales force and many startups up are following its pattern. Unlike the previous era, "Oracle can't go in and sell a multi-application suite to the business buyer. This is dead," he said.

Software-as-a-service was a $56 billion market in 2014. By 2026, it will be a $493 billion market. By 2030, it will constitute half of all the software that the enterprise adopts, Floyd predicted. Workday, ServiceNow, NetSuite, Intaact, Eloqua, SugarCRM, and other suppliers of SaaS have emulated Salesforce's success.

Storm Ventures was an early investor in Marketo, the 10-year-old marketing automation system company that went public in 2013 and now includes the online CrowdFactory service. It has also invested in Source Clear -- also known as SRC:CLR -- which provides online security for open source developers. 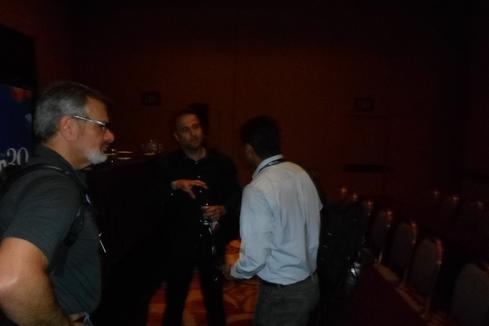 Storm Ventures has a number of non-SaaS investments. Under Floyd's initiative, it invested in Kidaro, the supplier of enterprise desktop virtualization software. The Israeli firm was sold to Microsoft for a reported $100 million in 2008.

In the last three years, the venture funding for startups getting into SaaS has tripled, Floyd told attendees. With the providers now available for infrastructure-as-a-service, a new software company can be launched on the pennies-per-hour expense of setting up a virtual server in the cloud.

"The cost of starting a software company is the cost of a swipe of the credit card on Amazon," he noted.

Furthermore, power services are springing up in the cloud to aid the creation of new SaaS applications. MapBox can allow other applications to access its powerful location-based map-drawing and step-by-step directions to a particular destination.

Where such services in the past were almost the sole province of a specialist, such as MapQuest, or a powerful service provider, such as Google Maps or Apple Maps, they will become generally available with many SaaS applications in the near future.

The public-facing API (application programming interface), which makes such services readily available to other developers, will rapidly expand the availability of many different kinds of SaaS, he noted. Mobile devices thrive on the light front-ends and heavy Internet servers behind them that SaaS frequently invokes.

[Want to see what Salesforce is up to next? Read Salesforce Investing In AI, Deep Learning.]

Traditional software companies are in danger of being left behind, sometimes despite their best efforts.

"I often hear the mistaken belief that it's easy to do the layer in the software stack that's above yours. Oracle has spent hundreds of millions of dollars, and it still isn't the leader (in CRM)," he said. Apple had a similar problem when it launched Apple Maps in 2012 and everyone could see its weaknesses versus Google Maps.

Upon launch, "Apple Maps was a mess," Floyd said. Three years later, "it's still generally not the best map. It's hard to move up those (software stack) layers," he concluded.

He sees such specialized applications as truck traffic control coming for busy mining areas. Today, they're controlled by traffic signs similar to those used by the general populace, but it matters whether you're stopping a pickup or one of the giant, ore-hauling vehicles whose brake pads "cost $100,000 a pop," said Floyd. Those vehicles should be given the right of way so they are not using their brakes frequently.

Floyd is so convinced of a SaaS-y future that he has advised Storm Ventures "not [to] invest in anything that has a hardware dependency. MetaCloud and Platform 9, on the other hand, provide OpenStack cloud software as an online services, and they're a better bet," he said.

Charles Babcock is an editor-at-large for InformationWeek and author of Management Strategies for the Cloud Revolution, a McGraw-Hill book. He is the former editor-in-chief of Digital News, former software editor of Computerworld and former technology editor of Interactive ... View Full Bio
We welcome your comments on this topic on our social media channels, or [contact us directly] with questions about the site.
Comment  |
Email This  |
Print  |
RSS
More Insights
Webcasts
Protecting Your Enterprise's Intellectual Property
Building the SOC of the Future: Next-Generation Security Operations
More Webcasts
White Papers
How to Prioritize Risk Across the Cyberattack Surface
Frost Radar: Global Threat Intelligence Platform Market
More White Papers
Reports
Building an Effective Cybersecurity Incident Response Team
How IT Security Organizations are Attacking the Cybersecurity Problem
More Reports