It's a common problem. A company makes its first major foray into cloud services and stumbles into trouble uniting data generated in the cloud with the general ledger and other on-premises, backend systems.

Sika Group is a 16,000-employee, Switzerland-headquartered, international specialty chemicals company that produces special sealants, bonding agents, and other chemicals used in the construction and automotive industries, including chemicals that slow the curing of concrete so that it may be pumped aloft to build a skyscraper. Revenues amount to $5.14 billion a year (Swiss dollars roughly equivalent to US).

In 2011, Sika adopted Salesforce.com for its customer relationship management system in the US, where its largest revenues are produced. Sika started generating customer data inside its Salesforce SaaS databases. Soon it found that data was needed by its existing SAP enterprise resource management applications. Sika needed to figure out how to unite the two.

Rob Blemhof, senior VP of IT for Sika North America, said Sika started out by looking at commercial application and data connector/adaptor products "but we were shocked by the cost. Licenses had a six-digit price tag." By turning to the commercially supported, but open source, Jitterbit system, Sika got a data integration system at what Blemhof said was "one-fifth" the cost.

[Want to learn more about how another service integrates applications with the cloud? See Dell Boomi Simplifies Integrating Java Apps.]

Blemhof characterized Sika as "a very conservative Swiss company" that in the past had shied away from much direct dependence on open source code or SaaS. But the North American IT group of 21 people convinced the much larger corporate IT group that adopting Salesforce and integrating it with Jitterbit was good value for the money. In addition, Jitterbit shifted away from open source into a commercial subscription model in 2010. 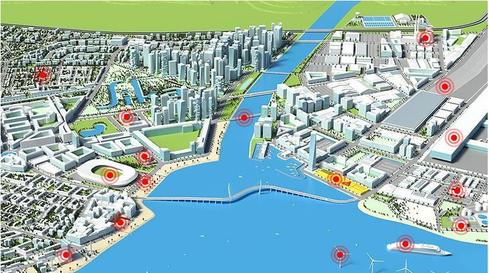 Sika produces a variety of chemicals used in the construction and automotive industries, as illustrated by the red dots on this map.
(Image: Sika)

But implementation wasn't without its trials. Unlike some open source code in the form of modules fresh from a large community project, Jitterbit is "a pretty finished, polished product" out of the box, as opposed to downloading a variable set of components and assembling them yourself, said Michael Estes, Salesforce business analyst for Sika.

It was straightforward to establish connections between the Salesforce.com data source and the Sika ERP system. Jitterbit can strip zeros planted at the front of a record as needed, perform data transformations from one app to another, and concatenate three or four records into one, as required by the receiving system. But what worked fine with 3,000 customer records at the start took much longer when processing 300,000 records, and Sika IT began to be concerned about whether the window to get certain tasks done was going to be large enough.

It was a question of scale and determining how Jitterbit could complete jobs without needing four or five hours to do so. "We needed Jitterbit to step in and help with these requests," said Estes. He said Jitterbit assigned one of its engineers to Sika to address the problems. With that assistance, Sika IT also examined API calls and the way it was handling queries, seeking to optimize each step of the process. The Jitterbit product team also notified Sika its next release would include an SAP application connector that it wants.

"For me, they've been very responsive. We can send them our code or get an engineer on a call with us," said Estes.

"We don't fill out a ticket and four days later they get back to us with some automated response," added Blemhof. "They've been responsive to our needs," he adds. Nevertheless, he still thinks Jitterbit users would benefit from more complete online documentation.

But the project in North America worked well enough that the Switzerland headquarters IT staff is also adopting Salesforce.com and using Jitterbit to integrate it with the rest of the company. The North American project has fostered "a change in mentality toward open source code," or former open source code, along with greater understanding of the work that can be accomplished in the cloud, said Blemhof.

The US unit is about a year ahead of headquarters in its use of Salesforce.com, but both parties are beginning to think about using more open source and SaaS, such as implementing additional connectors to tie in payroll processing or Concur online expense reporting. It is, said Blemhof, "fairly intuitive to make the connections."

Charles Babcock is an editor-at-large for InformationWeek and author of Management Strategies for the Cloud Revolution, a McGraw-Hill book. He is the former editor-in-chief of Digital News, former software editor of Computerworld and former technology editor of Interactive ... View Full Bio
We welcome your comments on this topic on our social media channels, or [contact us directly] with questions about the site.
Comment  |
Email This  |
Print  |
RSS
More Insights
Webcasts
Optimizing App Performance in the Cloud
Strategies for Success with Digital Transformation
More Webcasts
White Papers
Sunburst: Impact and Timeline
Supercharge Incident Response with DDI Visibility
More White Papers
Reports
The Infoblox Q4 2020 Cyberthreat Intelligence Report
Improving Security by Moving Beyond VPN
More Reports

This Apps very Useful for me.. I am using this Apps.. in my Business. It is Easy to Track My Support Team in view Map in my Mobile.. Great Technology. Good Job.. Thanks

I haven't heard of the scalability issue with Jitterbit previously. As companies become more dependent on SaaS and cloud services, any adapters and connectors with low volume capcacity will be put to the test. It may be higher scalability comes with the higher price tags of Informatica, Dell Boomi, etc. But Jitterbit also says it can address any problems. Also, Sika is using Jitterbit Version 5.0 as opposed to its latest Harmony release issued last spring.
Reply  |  Post Message  |  Messages List  |  Start a Board
Editors' Choice
Hot Topics