Microsoft is experiencing strong growth in its Azure-based, Dynamics collaborative applications, overtaking Salesforce as the market leader, according to a new report.

That means Microsoft in the second quarter of 2016 took the leader's post ahead of Salesforce in the overall software-as-a-service market, according to John Dinsdale, director of research at the Reno, Nev., based Synergy Research Group. 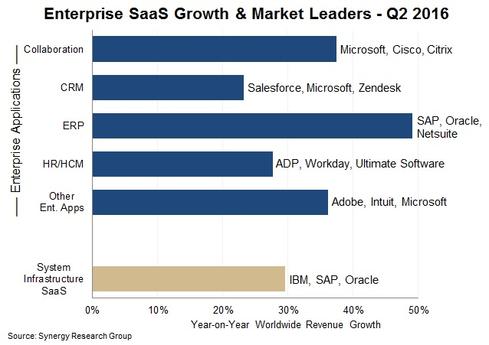 Microsoft moved into that position powered mainly by its strength in selling collaborative SaaS software used in salesforce automation and elsewhere in the enterprise, such as Microsoft Dynamics CRM, Dynamics ERP, Dynamics AX, which includes accounting, inventory, HR, and other applications. The collaboration segment of SaaS grew at a 37% rate in the second quarter, or faster than the SaaS market as a whole, Synergy reported Sept. 1.

The most rapidly growing class of SaaS was ERP at a rate of 49%, which Microsoft also offers, along with Oracle, SAP, NetSuite, Workday, Intuit, IBM, Cisco, Citrix, Adobe, and other vendors. Oracle was the fastest growing SaaS vendor in the quarter, said Synergy in a summary of its second quarter findings.

In April, the firm reported that Microsoft was growing at a rate of 70% in the SaaS market compared to Salesforce's 21% and was on a path to overtake Salesforce as the largest SaaS vendor by mid-year.

The enterprise SaaS market is likely to triple in size over the next five years, according to the report. Newcomers, such as Workday, ServiceNow, and Intuit, will vie with Microsoft, Oracle and other established vendors to claim the lion's share, Dinsdale wrote in the announcement.

"A big battle is playing out between the traditional, broad-based software vendors and companies that are focused on a specific application area or industry sector, many of which are entirely cloud based," he wrote.

Since Salesforce launched the concept of software-as-a-service, it has been the market leader, with other startups hoping to match its fast-moving footsteps.

"It might be tempting to assume that the latter camp are leading the charge, but in fact the traditional software vendors are growing their SaaS revenues more rapidly" at this point in the market's development, Dinsdale pointed out.

Microsoft, Oracle, and SAP are "helped by their huge base of on-premises software customers that can be aggressively targeted for conversion to a SaaS consumption model," he wrote.

Growth will be strong "across all segments and all geographic regions," he added. The consumer side of the market is growing more slowly and is not nearly as large as the enterprise share of the market.

Charles Babcock is an editor-at-large for InformationWeek and author of Management Strategies for the Cloud Revolution, a McGraw-Hill book. He is the former editor-in-chief of Digital News, former software editor of Computerworld and former technology editor of Interactive ... View Full Bio
We welcome your comments on this topic on our social media channels, or [contact us directly] with questions about the site.
Comment  |
Email This  |
Print  |
RSS
More Insights
Webcasts
Securing and Monitoring Networks in the 'New Normal'
The Failures of Static DLP and How to Protect Against Tomorrow's Email Breaches
More Webcasts
White Papers
A Practical Guide to SASE Migration
IDC Workbook: Best Practices for Cloud Security
More White Papers
Reports
2020: Threats in Review
Email Security Threat Report 2020
More Reports