Few of our 446 respondents will change their IT strategies as result of the cloud. That spells lost opportunity.

Cloud computing has widened the already pronounced rift between business executives and stereotypical IT throwbacks who think data is safer on internal Windows 2008 servers that get patched every quarter, whether or not they need it. There are a few members of the latter camp among the 446 business technology professionals from companies with at least 50 employees responding to our InformationWeek 2013 State of Cloud Computing Survey. They made comments such as "I won't trust my checkbook to the cloud, why should I trust anything else?" and "Another IT fad filled [with] flaws and glitches."

Our full 2013 State of Cloud Computing report is free with registration. Download it here.

This report includes 28 pages of action-oriented analysis, packed with 22 charts.

What you'll find:
Get This And All Our Reports
These results reinforce a trend we saw in our recent Standardization Survey, which yielded this gem: 76% of IT professionals believe that it's better to err on the side of tighter standards, whereas only 55% of those same pros believe their companies' senior business leaders feel the same. This means IT is either inept at communicating why it does what it does (including resisting the cloud) or fundamentally misaligned with the needs and priorities of the organization. Unfortunately, based on our new cloud survey, we're pretty sure it's the latter.

The cloud's core benefit is that it lets us selectively outsource tasks we used to have to do ourselves. Tech organizations that use the cloud can focus on their core competencies and may need fewer IT resources, so it's no wonder that large IT departments are hostile to it. But as long as their answer to the cloud is like those survey comments -- idiosyncratic, irrational and irrelevant objections -- IT will gradually become less and less involved with the adoption, use and support of information technologies across their companies, as business units make their own "shadow" IT purchases.

Sadly, many respondents don't seem to get that. We saw only an 11% increase in infrastructure-as-a-service adoption compared with 2012, from 27% to 30% among companies using public cloud services, and don't anticipate significantly faster growth in the next 12 months.

Why the negativity? Our survey comprises primarily IT professionals -- executives, managers and staff -- at larger organizations; 62% have at least 1,000 employees, and companies with fewer than 50 employees were removed from the results. Given that, it's likely larger companies that are moving slowly. While this may seem prudent from a risk management (and job-keeping) perspective, it exposes these companies to significant competitive threats that may not be adequately captured in risk and opportunity evaluations. 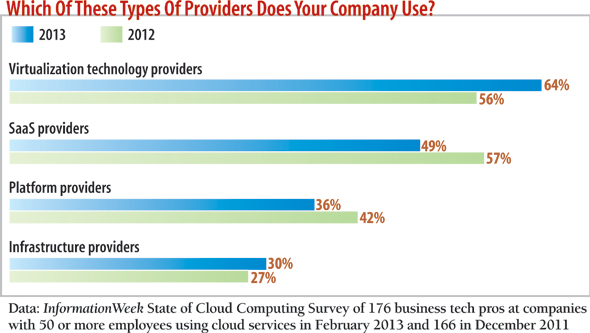 There is some movement, however. We saw a 29% increase (14% to 18%) in the percentage of respondents who have replaced or fired a cloud provider. This speaks to one of the core advantages of outsourcing IT services: These shops are much less likely to have dedicated staff and hardware that can create inertia around the operational aspects of change. Instead, business needs are a larger part of the decision, and IT can implement changes faster.

We're not saying respondents don't have some valid concerns about the cloud. Let's look at a few.

>> Loss of control: It makes sense that companies want to adopt new technologies slowly. Moreover, the cloud ultimately is about handing over control; in the case of SaaS, business units can (theoretically) own the relationships with vendors, cutting IT out entirely. If CIOs want to retain influence, we would expect to see greater adoption of IaaS as well as virtualization and private cloud, which are arguably less disruptive to the control structure than SaaS and PaaS. And this is exactly what we find in the 12-month planning question, where planned IaaS adoption among those using or expecting to use cloud services has jumped 42% compared with 2012. 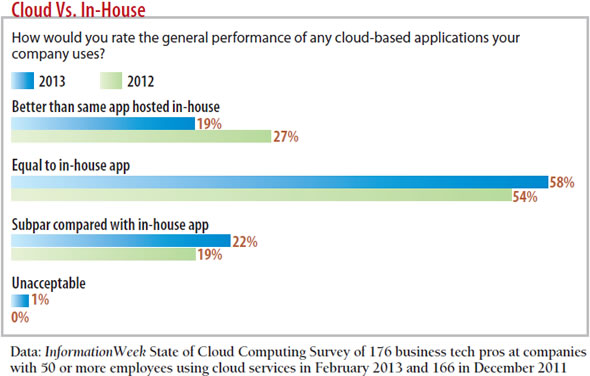 Gartner has been so bold as to predict the "end of the traditional sourcing model" in favor of cloud-based services, with SaaS, PaaS and IaaS taking more market share than traditional sourcing by 2015. Trending data from our State of the Cloud Survey since 2010 shows companies that adopt cloud computing generally aren't going back to on-premises deployments. In other words, the cloud isn't all hype; it does deliver, otherwise services would be rolling back to internal IT. Startups, non-IT business units, consumers and the media all recognize the value. It's painfully ironic that the biggest source of griping and inertia is the department that could benefit the most.