Google Glass With Intel Inside: Form Must Trump Fashion - InformationWeek

Glass ultimately deserves to be deconstructed. Google's biggest mistake was fusing several technologies that should be separate clip-on hardware modules into a single, inflexible form factor.

Google Glass is pivoting from a high-tech fashion accessory to a workplace tool.

In the wake of a Reuters report last month that said developers have come to doubt the viability of Google Glass as a mass-market product, The Wall Street Journal on Monday said that Intel chips will replace Texas Instruments silicon in a future revision of Google's computerized eyewear.

Intel reportedly plans to promote Glass among hospital groups and manufacturers, where workers may benefit from hands-free access to information while on the move.

Google didn't immediately respond to a request for comment.

Intel's apparent involvement with Glass represents a continuation of a shift that Google formalized in April when it introduced Glass at Work, an initiative to explore enterprise uses for its wearable computing device.

[Want to learn about the software that makes wearables like Google Glass useful? See Wearables At Work: 7 Productivity Apps.]

Glass has been fighting the gravity of mass-market failure ever since its high-profile introduction at Google I/O 2012, when skydivers wearing Glass live-streamed their parachute jump onto the roof of the Moscone Convention Center in San Francisco.

Despite the endorsements of celebrities and fashion designers, Glass has managed to alarm lawmakers, alienate the general public, and invite ridicule -- all without an official public launch, which a Reuters source suggests has been pushed back to next year. 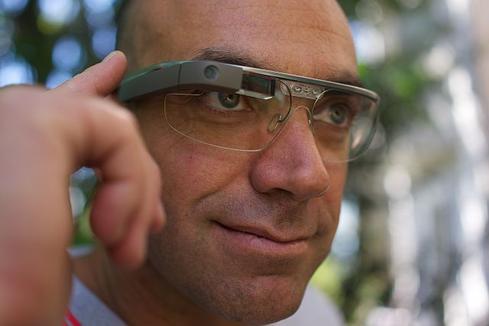 Perhaps more damning, Glass doesn't appear to be broadly useful when hands and a smartphone are available or when alternative devices, such as a GoPro camera, can be employed. Though there are without doubt some compelling potential consumer uses for Glass in public settings, such as real-time translation of foreign language text and live video journalism, the real proofs-of-concept are occurring in private, in enterprise environments.

For example, Boeing recently said it plans to use APX Labs' Skylight software platform for smart-glasses applications as a way to deliver real-time, hands-free access to engineering specifications. And Beth Israel Deaconess Medical Center has been using a modified version of Glass in its emergency department. Other companies are exploring the use of computerized eyewear, too, in healthcare, logistics, insurance, and various forms of field work.

Google should have known better than to position Glass as an object of desire. Product design has long been uneven at Google (which may explain the company's acquisition of Nest and its Apple-trained team). Despite elegant novelties like the Chromebook Pixel, Google has also introduced problematic hardware such as the Nexus Q. Its handling of Motorola, a hardware company, was not much better.

Glass, while visually appealing, exhibits blindness to social expectations, a flaw that in other Google products like Street View, Search, and AdWords keeps creating privacy problems for the company.

Glass ultimately deserves to be deconstructed. Google's biggest mistake was fusing several technologies that should be separate clip-on hardware modules into a single, inflexible form factor: a defiantly rigid eyeglass frame that demands to be worn at all times, since it can't be folded to fit into a pocket. Glass combines a video camera, a display screen, a microphone, a frame-mounted touch sensor, and an Android-powered processor. Imagine how much easier Glass would have been to accept if it didn't include a camera that made people think they were being filmed all the time, or if its camera were removable.

Glass may yet be repriced at something more affordable than $1,500 and reimagined to entice consumers, but companies are already interested in a wearable that can convey information without placing demands on the wearer's hands. The future of Glass depends on function rather than fashion.

Thomas Claburn has been writing about business and technology since 1996, for publications such as New Architect, PC Computing, InformationWeek, Salon, Wired, and Ziff Davis Smart Business. Before that, he worked in film and television, having earned a not particularly useful ... View Full Bio
We welcome your comments on this topic on our social media channels, or [contact us directly] with questions about the site.
Comment  |
Email This  |
Print  |
RSS
More Insights
Webcasts
Making XDR Work in Your Enterprise - May 12
Multi-Cloud Data Management for Modern Applications
More Webcasts
White Papers
Protection Strategies for a Cyber-Resilient Organization
Powering Digital Transformation
More White Papers
Reports
Are We Cyber-Resilient? The Key Question Every Organization Must Answer
2021 Application Security Statistics Report Vol.2
More Reports

Everyone seems to have something to say on Glass, even before a public launch.

Intel's plans to promote Glass among hospitals and manufacturers is a good idea. Free hands can be very useful in both scenarios.

I believe it's always better to welcome a technology that can be useful for many industries instead of just start criticizing it without too much ground for doing it so.