Subsidizing Google Apps for Work will now continue through the end of the year for customers under contract with other vendors. Google also expanded the program to provide assistance to smaller companies.

Google says it will extend its program to encourage companies under contract to other service providers to switch to Google Apps for Work by offering its productivity suite for free until the contract expires.

In October, Google began subsidizing Google Apps for Work for business customers locked into Enterprise Agreements (EAs), as a way to encourage them to consider Google's software. For companies not under contract, Google offered to help pay for migrations from other services.

Neil Delaney, director of global inside sales for mid-market, Google Apps for Work, said in a blog post Tuesday that, since then, almost 200,000 additional users have "gone Google."

Google now says it will extend the program through the end of 2016, and also expand it to provide assistance to smaller companies interested in Google Apps.

"Companies between 250 and 3,000 that currently have an EA with another vendor can qualify for zero-cost Google Apps licenses for the term of their existing EA," said Delaney. "And now, companies with 100 users (previously 250) to as many as 3,000 can qualify for a Deployment Voucher."

Google is sweetening the pot by offering mid-market customers that sign up through this promotion with free access to a $750 Security Workshop run by its integration Partners. The company claims that the security benefits of Google Apps are particularly useful to mid-market businesses. 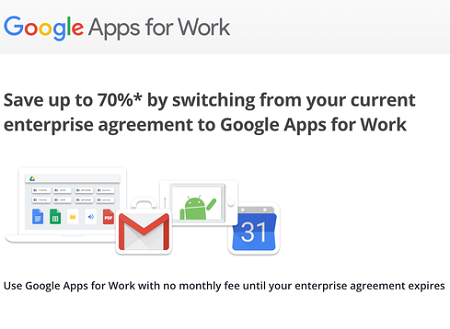 One such benefit is access to two-factor authentication through Yubico Security Keys, which are available to Google Apps customers for 50% off. Google's Recommended for Google Apps for Work partners are also offering discounts on products like AODocs, Dialpad, Powertools, Prosperworks, and Smartsheet.

In an email, ProsperWorks CEO Jon Lee praised the vision and ease-of-use of Google Apps for Work. "The Google Apps for Work program has drastically reduced the barrier to entry for businesses moving to the cloud, and we are pleased to be a part of this important initiative," he said. "We look forward to helping companies harness the power of the cloud, and optimizing the way sales teams collaborate and communicate with ProsperWorks."

Google is continuing a tradition of enticing customers to reconsider vendor relationships through tools that reduce the burden of change or through outright financial incentives. When it entered the enterprise business in 2002, it was viewed with skepticism by large companies. It lacked the enterprise sales force to woo customers away from longstanding relationships.

Since then, having established its commitment to enterprise software, Google has tried to reduce the friction that can make switching services unpleasant with migration tools like Google Apps Sync for Microsoft Outlook, Google Apps Migration for Lotus Notes, and the Google Sites API.

But Google's competitors have done the same. Apple, for example, offers the Move to iOS app to help Android users move their data to an iOS device. Microsoft Office 365 provides a migration tool to move messages out of Google Apps Gmail mailboxes.

Companies do their best to corral their customers. But for every fence, there's a competitor willing to knock a hole in it. In the end, the best defense against defection is great service at a great price.

Thomas Claburn has been writing about business and technology since 1996, for publications such as New Architect, PC Computing, InformationWeek, Salon, Wired, and Ziff Davis Smart Business. Before that, he worked in film and television, having earned a not particularly useful ... View Full Bio
We welcome your comments on this topic on our social media channels, or [contact us directly] with questions about the site.
Comment  |
Email This  |
Print  |
RSS
More Insights
Webcasts
Detecting and Preventing Insider Data Leaks
Hybrid Cloud: The Great Balancing Act
More Webcasts
White Papers
Why Add Security to Your Skill Set and How to Do It
Data Orchestration: Critical Elements for Data Strategy and Infrastructure
More White Papers
Reports
The State of Threat Detection and Response
DNS Network Traffic Volumes During the 2020 Pandemic
More Reports

@impactnow I use Gmail and Google Drive most often. I have tried other apps, but find I really only use these two. I have helped other small businesses by setting up Google Apps for Business on thier domains. They tend to use the collaboration tools far more often than I do for my personal domain.
Reply  |  Post Message  |  Messages List  |  Start a Board

@impactnow I've been a user since the early years. I don't worry about going over storage limits or uptime. Google for Work is more reliable than any basic service provided by a shared hosting company. I'm very happy with the service.
Reply  |  Post Message  |  Messages List  |  Start a Board

Great way to build both adoption and penetration--would love to ttry them!
Reply  |  Post Message  |  Messages List  |  Start a Board

I had no idea Google was offering such a sweet deal. Apps for Work has really improved over the years. The admin dashboard is really nice these days.
Reply  |  Post Message  |  Messages List  |  Start a Board
Editors' Choice
Hot Topics