CenturyLink pushes software-defined networking into its telecom and cloud data centers as the basis for more user-centric services.

CenturyLink is moving aggressively to convert its core IP network and cloud data centers to software-defined networking (SDN). It's a move that it maintains will prove an advantage in extending self-service to both cloud and network services customers.

By the end of 2015, the company expects to have 40% of its global IP network working as SDN and network-function virtualization. It plans to be operating with 100% SDN by 2018.

CenturyLink SDN is currently installed in 36 network and cloud data centers. CenturyLink now operates 60 data centers around the world, according to its website, after the acquisitions of Savvis in 2011 and Tier 3 in 2013.

CenturyLink, Verizon, NTT Communications, and other large telecoms are in a position to parlay their global presence in server, switching, and routing centers, tied together by private lines, into secure and specialized cloud services. But to do so they must make those services as readily available as Amazon makes its virtual instances. 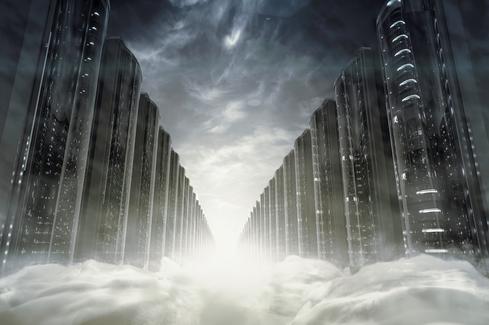 With network-function virtualization, a CenturyLink banking customer that wants to bring 20 branches online in five cities could do so by creating new endpoints on its network map, then defining the type of network it wants them connected with. The process could be completed "in a few minutes to a few days, as opposed to a few days up to several months" in the past, when the process was completed manually by network technicians, said Aamir Hussain, CTO of CenturyLink, in an interview.

[Want to learn more about how cloud services will fade into general IT services? See Signs Point To A Coming Post Cloud Era.]

Network-function virtualization enables allocation of specific functions to users' workloads in the CenturyLink Cloud, such as putting a firewall in front of a networked resource, adding encryption, or applying load balancers, Hussain said. SDN brings flexible network assignment to cloud users and all other users of the CenturyLink network, he added.

As it establishes the SDN infrastructure, it's planning a customer-centric interface that will allow users to provide service for network functions online. This will "give businesses near real-time provisioning and more control over their service experience," said Hussain.

SDNs separate the control plane from the data plane. A centralized controller sends out instructions to the switches and routers on the network. CenturyLink wrote its own SDN controller software, then added workflow and product catalogue features through third-party offerings.

CenturyLink has been at work on its virtualized network for two years and recently launched what it calls its Programmable Services Backbone, which enables the fast delivery of new services to both large and small customers. The backbone is equipped with Ciena's Blue Planet Network Function Virtualization Orchestrator.

In an announcement Monday, Oct. 19, CenturyLink said that in February last year it began working with Ericsson to produce next-generation Operations Support Systems and Business Support Systems. The systems rely on a reliable network transport infrastructure in order to fulfill customer orders for services, Hussain said.

Although available to both telecom and cloud users, Hussain specifically said it will give CenturyLink's cloud customers many more options. "They can order a large amount of compute and storage in five data centers. Then, rather than go to outside service providers to ask for connecting lines, they can drag and click the services they want to the locations they want. There will be more options for cloud users," he said.

As it began work on network virtualization in 2013, CenturyLink partnered with Nuage Networks, Arista, Supermicro, and Red Hat to build out the required SDN infrastructure. Eventually the CenturyLink SDN will be able to function with a customer's on-premises switches and routers when customers have established their own SDNs, leading to more flexible implementations of network functions and services, he said.

"Everything you're able to do today you can do on the software-defined network, only much faster," Hussain said. He both sets technology goals and supervises product management at CenturyLink. He also holds 11 patents in telecommunications. He's been in the CTO post for two years.

Charles Babcock is an editor-at-large for InformationWeek and author of Management Strategies for the Cloud Revolution, a McGraw-Hill book. He is the former editor-in-chief of Digital News, former software editor of Computerworld and former technology editor of Interactive ... View Full Bio
We welcome your comments on this topic on our social media channels, or [contact us directly] with questions about the site.
Comment  |
Email This  |
Print  |
RSS
More Insights
Webcasts
Using MS Teams as Your Phone System - FREE Event 4/14
Managing a Hybrid Cloud Infrastructure
More Webcasts
White Papers
2020 SANS Enterprise Cloud Incident Response Survey
The Top 5 Mistakes Everyone is Making in Vulnerability Remediation
More White Papers
Reports
Are We Cyber-Resilient? The Key Question Every Organization Must Answer
The State of Cloud Computing - Fall 2020
More Reports

Last week, Wall Street analysts said game over for VMware because everything is moving into modern, public cloud data centers, such as Amazon. But enterprises will modernize too. VMware says there is no modern data center, no software-defined data center, in the enterprise or public cloud without network virtualization. CenturyLink as a public cloud provider is affirming that message: it's a big adopter of SDN and is rolling it out to its cloud-provisioning data centers.
Reply  |  Post Message  |  Messages List  |  Start a Board
Editors' Choice
Hot Topics