Atos, the supplier of IT systems to the 2016 Summer Olympics, has been testing its technology for 200,000 hours before the games begin this week. Like many other businesses, Atros and the Olympics are relying on cloud services to insure information delivery.

The Summer Olympics of 2016 will begin Aug. 5 in Rio de Janeiro. For Shailesh Chauhan, technical and IT security manager for the games' IT supplier, Atos SE, it's show time. All of the applications rolled out for the event are expected to perform without a hitch as millions watch the games around the world.

These applications will not only have to deliver results around the city and the globe within a half second of being announced by judges in different event venues, the technology will also have to deliver detailed event and athlete information to multiple types of computers and mobile devices that will be in use by commentators, coaches, athletes, and news organizations.

If the Games Management group of systems or Information Diffusion Systems underperforms -- or worse, stalls -- 4,500 Atos staffers in Rio will be scrambling to fix the problem, with another 500 in Europe trying to assist. 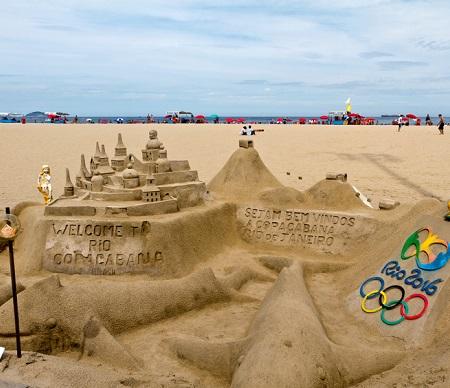 Nevertheless, Chauhan, in an interview with InformationWeek, predicts, "The delivery of IT for the games will be the most successful ever. There's no doubt about that," despite the "exponential increase in demands for information about the results and the people in the games."

Learning From Past Games

Chauhan is a veteran of the 2012 games in London, as well as the 2010 Winter Olympics in Vancouver. He's seen the IT needs of the games evolve from a large data center specifically created by Atos on the host city's site to this year's need for a limited server footprint at the site, backed up by a Brazilian-based cloud supplier nearby.

Where Atos needed a 1,000-server data center in London, it now gets by with the 250 servers it established in Rio for this year. "It's a dramatic drop in our physical footprint," he said.

"Sixty percent of our operations have moved into the cloud," said Chauhan, with the service provided by Embratel-supplied facilities. (Embratel is a major telecommunications company in Brazil.)

The availability of cloud servers gives Atos an ability to scale up, if viewers start demanding more information services, he said. Likewise, it's possible to scale the operation back during slack times.

Resiliency and high availability -- which the cloud helps provide -- are crucial. To a high degree, Atos also has relied on virtualized systems on its own servers. Because of that, they're being utilized at a higher rate than the servers set up in London were.

"Eighty-five percent of our systems have been virtualized" this year, said Chauhan. That allows Atos own budding cloud service -- Canopy -- to hold back-up copies of originals and migrate to the Canopy cloud in case of some kind of disaster.

Reliance on the Cloud Rising

For future Olympics Games, Atos intends to rely on its own network of Canopy cloud centers. That will be the case after Rio as it prepares for the 2018 Winter Olympics in PyeongChang, South Korea, as well as the 2020 summer games in Tokyo, Chauhan said.

In the past, Atos simply built as large a data center as was needed in the host city. The cloud changes that.

Having effective IT systems is instrumental to the success of the games.

The event registers 300,000 participants, including athletes, coaches, judges, site builders, managers, and 50,000 host country volunteers. Registrants also need to be accredited in a process that makes them full participants and gives them a visa to attend in the host city.

However, Atos doesn't have to provide ticketing systems for event spectators -- those are the bailiwick of a different company.

However, once the event is actually occurring, Atos has to provide Information Diffusion apps, including the Commentator Information System, that deliver real-time results to media -- primarily NBC, the BBC, and other broadcasting companies around the world. The media outlets work through the International Broadcasting Center set up for the games.

Michèle Hyron, Atos chief integrator for the games, said in a statement:

Atos' IT systems will allow for the instantaneous reporting and beaming of 6,000 hours of Olympic coverage to the world through both more traditional television means and digitally to billions of laptops, tablets and smartphones.

In addition to the backup and resiliency provided by the cloud, each major venue has an IT operations center that Atos will be staffing. It's another reason Chauhan is confident in his team's ability to deliver constant coverage. Both the software and equipment running in the centers have been the subject of thorough testing in an Atos-built lab for the past 16 months.

Venue IT operations rooms are coordinated through a Technology Operations Centre with a 24x7 staff of 164 technicians who collect information for the games as a whole. Likewise, its communications and integration software has been tested repeatedly.

"We have done 200,000 hours of vigorous testing on all systems because they've got to work the first time. You can't stop the Olympics to troubleshoot your systems," Chauhan said. The testing covered both hardware and software in use during the games, not just the software applications. As the games begin, the same hardware and software will be in use in the venue operations centers.

[Want to know how to protect yourself at the 2016 Olympics? See Dark Reading's advice: Staying Cyber Safe at the Olympics.]

About 7% to 8% of the Technology Operations Centre staff will be devoted to monitoring security for all operations, he said.

Accredited members of the press and athlete's teams will be able to obtain live results through the myInfo+ application. The myInfo+ app was available for the 2012 games, but this year it will include the ability to download and view video information often desired by the press, athletes, broadcast networks, and other media.

"With the everyday use of mobile devices, demand is exponentially higher for mobile services," including both video and near real-time results, said Chauhan. By delivering all of that, Atos will have accomplished something that has been available to only a few recipients in the past and will have lived up to its charter to provide complete information to all parties interested in the 2016 Olympic Games.

Charles Babcock is an editor-at-large for InformationWeek and author of Management Strategies for the Cloud Revolution, a McGraw-Hill book. He is the former editor-in-chief of Digital News, former software editor of Computerworld and former technology editor of Interactive ... View Full Bio
We welcome your comments on this topic on our social media channels, or [contact us directly] with questions about the site.
Comment  |
Email This  |
Print  |
RSS
More Insights
Webcasts
Securing and Monitoring Networks in the 'New Normal'
Strategies for Success with Digital Transformation
More Webcasts
White Papers
Five Reasons to Protect your VPN with Multi-Factor Authentication
Two-Factor Evaluation Guide
More White Papers
Reports
2020: Threats in Review
The Drive for Shift-Left Performance Testing
More Reports

Atos has established several Canopy data centers around the world and for future Olympics, will rely more heavily on its own cloud services than those that might (or might not) be found in the host country. Canopy is a general purpose platform based on the Cloud Foundry Foundation's open source software and certified as Cloud Foundry compliant. Atos will use it both for its general purpose IT consulting and its Olympic IT service needs, Shailesh Chauhan said.
Reply  |  Post Message  |  Messages List  |  Start a Board

Atos has been providing IT services to the Olympics since 1989, giving it key experience that no other single company has. The first web site constructed for an Olympics in 1996 received 189 million hits. Four years later, the number jumped to 11.3 billion, a number that will probably be dwarfed by this year's hits. More important are the Atos systems managing the internal operations of the Olympics and its growing use of cloud services to provide them.
Reply  |  Post Message  |  Messages List  |  Start a Board
Editors' Choice
Hot Topics