Rackspace, after posting a strong second quarter, says it's not for sale and it will push its 'managed cloud' offering with renewed vigor.

Rackspace is no longer for sale. The company announced Tuesday that it has ended a four-month evaluation of options that might lead to a partnership or acquisition.

The decision to abandon the search was based on Rackspace's "re-accelerated revenue growth and its potential trajectory for the coming year," the company said.

Taylor Rhodes, who was named as president in January, has been appointed to the post of CEO as well. He replaces Graham Weston, co-founder and chairman of the board, who has been serving as CEO since February. There had been some turnover previously in Rackspace's executive ranks. Rhodes replaced Lanham Napier as president, who in turn had replaced Lew Moorman, former president and chief strategy officer. Moorman resigned in July 2013 for reasons of family health.

Last May, Rackspace announced it had engaged Morgan Stanley and the law firm of Wilson Sonsini Goodrich & Rosati to explore possible partnerships and options to be acquired. The San Antonio company, a well-established managed service provider that moved into public cloud computing services, faced heavy profit pressure over the last 18 months as Microsoft, Google, and Amazon Web Services repeatedly lowered their prices. Rackspace occupied a slightly higher priced niche than they did, offering extensive support to users of its public cloud.

Dell, EMC, IBM, HP, Cisco, Microsoft, and CenturyLink were all at one time or another mentioned as possible Rackspace buyers as the companies are looking to expand their presence in cloud services. 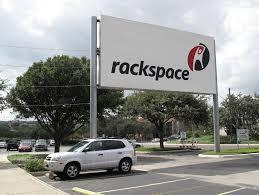 "We ran a thorough process under the direction of our board of directors, independent advisors, and a Strategic Transaction Committee of the Board," said Weston in the company's announcement. "In this process we talked to a diverse group of interested parties and entertained different proposals. None of these proposals were deemed to have as much value as the expected value of our standalone plan."

As the search for a partner/buyer went on, Rackspace took itself out of the commodity infrastructure-as-a-service market and repositioned itself as a supplier of "managed cloud services," a stance that more closely reflected its emphasis on support and its other line of business -- managed hosting and managed services -- where Rackspace takes responsibility for operations of individual customer servers. At Amazon, the customer spins up a virtual server and then is responsible for monitoring and maintaining it through the tools that Amazon provides.

"We concluded that the company is best positioned to drive value for shareholders, customers, and Rackers through the continued execution of its strategic plan to capitalize on the growing market opportunity for managed cloud services," Weston said in the announcement.

The move follows a strong second quarter in which Rackspace added more than $20 million in revenue in a single quarter for the first time, and showed revenue growth of 4.3% over the first quarter. Growth in its multi-tenant, now "managed cloud" accelerated to 7.5%, Weston said.

In the managed cloud, Rackspace offers not only virtual or bare metal servers but also management of complex tools, applications, and database systems running on them. Customers sometimes prefer their customer-facing ecommerce system to run as a managed services, as opposed to a set of cloud servers that they're managing remotely.

"By delivering expertise in these highly specialized areas, Rackspace enables customers to stay fast and lean and to focus on their core business," Weston said.

Rackspace's moves reflect its fortunes in the Gartner Magic Quadrant. It was a trailing supplier in the research group's quadrant for cloud services; it was the undisputed leader in this year's Managed Services Magic Quadrant, with companies like IBM, Verizon Terremark, CenturyLink, Datapipe and AT&T following behind.

Weston also said the company considered a share buyback program but will not be taking any steps in that direction in the immediate future. "We will continue to evaluate the benefits of implementing a buyback program in the future," he said.

Rackspace's cloud initiative began with a pioneering effort in its facilities the same year that Amazon launched its beta infrastructure as a service, 2006. Jonathan Bryce built out the Mosso cloud as an experimental, white box assembly and its operation served as the template for what became the Rackspace Cloud. Byrce now serves as executive director of the OpenStack Foundation, sponsor of the cloud open source project that Rackspace co-founded.

Charles Babcock is an editor-at-large for InformationWeek and author of Management Strategies for the Cloud Revolution, a McGraw-Hill book. He is the former editor-in-chief of Digital News, former software editor of Computerworld and former technology editor of Interactive ... View Full Bio
We welcome your comments on this topic on our social media channels, or [contact us directly] with questions about the site.
Comment  |
Email This  |
Print  |
RSS
More Insights
Webcasts
Securing and Monitoring Networks in the 'New Normal'
Protecting Your Enterprise's Intellectual Property
More Webcasts
White Papers
IDC Workbook: Best Practices for Cloud Security
From MFA to Zero Trust
More White Papers
Reports
The State of Threat Detection and Response
Special Report: Edge Computing: An IT Platform for the New Enterprise
More Reports

Regardless, it's nice to see a business that believes it can survive on its own; so many startups are really just speculative exit plans that involve Apple, Amazon, Google, or Microsoft.
Reply  |  Post Message  |  Messages List  |  Start a Board

Charlie, Agreed. Maybe "cloud-enabled managed services" if they must, but let's hope we're seeing the beginning of the end of cloudwashing.
Reply  |  Post Message  |  Messages List  |  Start a Board

I would prefer to call "managed cloud" just managed hosting or managed services. The cloud is automated, not managed. And even though Racksoace servers can be spun by customers remotely, it's not the same as Compute Engine or EC2. Managed services have humans somewhere on the same premises as the servers,with direct control over them. Nothing wrong with managed services. They just don't fit my definition of cloud computing and the definition keeps getting watered down in various ways.
Reply  |  Post Message  |  Messages List  |  Start a Board
Editors' Choice
Hot Topics