After establishing a reputation around its database, MongoDB is out to prove it is a data platform company that can challenge incumbents.

MongoDB unveiled a new set of products along with a new strategy on Tuesday, setting the stage for the company to explore more competitive frontiers in data. At this year’s MongoDB World conference in New York, the company announced the creation of its Atlas Data Lake, positioning it as an alternative to Microsoft’s Azure Data Lake and other incumbent resources. MongoDB also talked up its Atlas Full-Text Search, which lets end users filter and rank their data by relevance. This is all part of the MongoDB’s push to show it is a data platform company and not just a database.

During the conference, Dev Ittycheria, CEO of MongoDB, sat down to discuss what the new offerings mean for enterprises and where this new direction will take his company.

What does MongoDB bring to the table in these competitive arenas you have entered?

"These announcements reinforce the point that MongoDB is no longer a database company but a data platform company. We’ve broadened the aperture of the things we can bring our customers. The hallmarks of what makes us an attractive platform is we believe we offer the best way for developers to work with data. That’s a function of the document model, that’s a function of the MongoDB query language, that’s a function of how easy it is to use the platform, and how developers program today. We’re leveraging those strengths around the MongoDB query language and the ease of working with data, and we’re expanding that to more functionality around search because that is a key feature that customers asked for. We’re embedding that into the core server.

"We’re extending that capability of working well with data to the data lake, leveraging the richness of our query language and applying it to online and offline data. That’s all driven by customer demand. 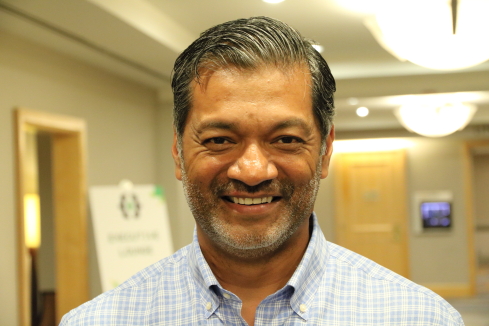 "We’re very different than say how the Hadoop vendors went after the data lake market. They forced people to make a huge upfront investment and learn a lot of new technologies they never learned before. Those customers had to hire data scientists to work with that complex technology. The end result was that people paid a lot of money but the time to value was very, very long. We’re taking a different approach. We’re leveraging all of the strengths of MongoDB, so there is nothing new to learn. There’s no big, upfronted costs to use the product. There’s no setup, there’s no management. They can just point query language to their S3 buckets and they are off and running."

What were the steps taken by MongoDB that brought the company to this phase? What are the strengths you are building?

"The richness of the document model makes life very easy for developers. It’s very natural to what developers think -- how they think about a customer object or product SKU. When they work with a relational database, they have to decompose that object into data so they can get different tables. They are constantly mapping from different objects to data tables, which is a cognitive load. They want to think about everything in an object format, because that’s the way they are naturally thinking.

"With MongoDB, much like we treat objects in a program language, we treat them as objects in your database. It’s very aligned to how they program and think, so the cognitive load is very low. Because of the document model, you can express very complex relationships, you can express parent­-child relationships, and you can embed subdocuments within documents. It’s very easy to express very rich relationships between data entities unlike a table, such as a customer database, where you have to point names to locations, to phone numbers, to email. From a developer point of view, it makes life so much more simple."

Why is MongoDB moving into new areas?

"MongoDB is a very sophisticated distributed database, which means it gives customers the ability to apply intelligence in where they place their data. A simple reason could be availability. A distributed database is multiple copies of data, so in case of system or network failures there is no downtime. As your data volumes grow, we can spread data across multiple machines or virtual machines so you can scale easily versus constantly upgrading your boxes.

"Gaming companies love MongoDB because games are kind of like movies; you don’t know if you’ll have a hit or a dud. If you have a hit, you’re not going to suddenly stop the game and say, ‘Hey, I need six months to replatform,’ because you will lose all that business. You want to scale to millions of users on a worldwide basis."

With this next phase for the company, what are you weighing in terms of management, strategy, and staffing? Are looking for hires with specific skillsets?

"When we are growing really fast, how do you grow without the train coming off the tracks? We have a high bar for people to get through the door. We have to recruit and develop leaders. Because we are growing so fast, a lot of our managers are first-time leaders. We spend a lot of time on leadership development. We want to retain our culture. We want to give people an opportunity not just for a job but a career that can grow over time.

"I don’t worry about competition, per se, because we’ve done well against large companies. What I really worry about is execution, and scale is all part of execution. Can we scale the business, continue to maintain the high growth rate and deliver constituent results."

Joao-Pierre S. Ruth has spent his career immersed in business and technology journalism first covering local industries in New Jersey, later as the New York editor for Xconomy delving into the city's tech startup community, and then as a freelancer for such outlets as ... View Full Bio
We welcome your comments on this topic on our social media channels, or [contact us directly] with questions about the site.
Comment  |
Email This  |
Print  |
RSS
More Insights
Webcasts
The Failures of Static DLP and How to Protect Against Tomorrow's Email Breaches
Making Cybersecurity Work in Small and Medium-Sized Businesses
More Webcasts
White Papers
All In, Online Gaming & Gambling
The State of Threat Detection and Response
More White Papers
Reports
The State of Threat Detection and Response
2020 State of DevOps Report
More Reports