Power BI, Microsoft's cloud-based suite of data analysis tools, is getting a few key additions. New capabilities will be added to the current preview version throughout July until it enters general availability on July 24 and preview accounts are converted to Power BI free accounts.

Last year, we saw a wave of updates enter beta testing in Power BI, a platform originally delivered via Office 365 and integrated with Excel. Power BI was designed to enable users to explore and analyze data, and then publish charts and graphs on new BI sites, in an effort to democratize business intelligence.

Earlier this year, Microsoft decided to cut ties between Office 365 and Power BI. The data analysis platform would be released as a standalone "freemium" service, a change intended to drive widespread adoption. Microsoft promised lower prices and a new Power BI website.

[How does your compensation stack up? Read: IT Salaries: It's Good To Be Chief.]

Now the preview is getting a few more powerful additions before the July 24 launch. The new features announced today reflect an ongoing effort to drive the BI market and allow more freedom in data analysis.

Although Power BI is cloud-based, "by no means do we expect everyone to move their data to the cloud," said John Doyle, director of product marketing for cloud and enterprise at Microsoft, in an interview with InformationWeek. "We want to get more people connected to data than ever before; make it easy for end-users to connect to their data and get value out of their data."

Here's a closer look at the new features arriving on Power BI and how they'll change the service:

Microsoft is opening its visualization framework and visuals built on D3.js to make it easier for customers to extend, build, and customize visuals specific to their enterprise. This is available July 10 as an open-source project on GitHub. Going forward, customers will be able to use their customized visuals in reports and dashboards in Power BI.

Currently known in preview as the Power BI Designer, the Desktop is a new data-reporting tool freely available on PowerBI.com. Users can drag and drop their data on a free-form canvas then explore a library of visualizations. These include new additions like matrix, area, donut charts, and waterfall and more options for formatting and color. Microsoft has added new data source support from services including Twilio, GitHub, Zendesk, SweetIQ, and AppFigures. These additions, as well as a direct connection to SQL Server Analysis Services, will be available later in July. 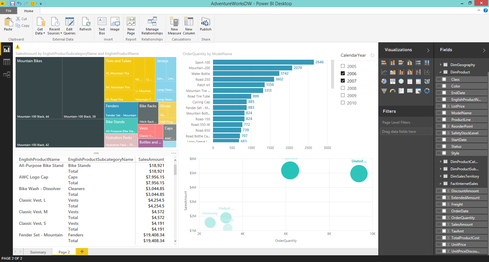 Users who subscribe to specific services can connect to their accounts through Power BI to access prebuilt reports and dashboards. Microsoft has released content packs for 16 services, including Quickbooks Online, Salesforce, and Marketo. Other platforms, including SQL Sentry, Adobe Analytics, and Azure Mobile Engagement, will be added.

"It's a significant differentiator in the marketplace," said Doyle, who noted plans to expand the number of content packs and third-party vendors in coming months. 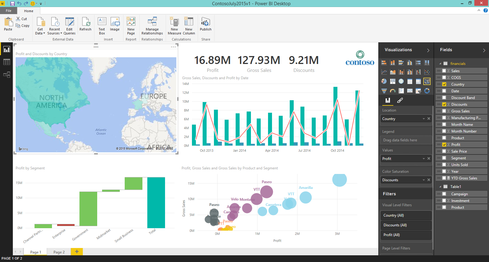 Power BI is already available on mobile for iPhone, iPad and Windows devices. Now, Microsoft has extended support to include Android smartphones.

Kelly Sheridan is the Staff Editor at Dark Reading, where she focuses on cybersecurity news and analysis. She is a business technology journalist who previously reported for InformationWeek, where she covered Microsoft, and Insurance & Technology, where she covered financial ... View Full Bio
We welcome your comments on this topic on our social media channels, or [contact us directly] with questions about the site.
Comment  |
Email This  |
Print  |
RSS
More Insights
Webcasts
Staffing & Training a Cyber Incident Response Team
Now That Ransomware Has Gone Nuclear, How Can You Avoid Becoming the Next Victim?
More Webcasts
White Papers
[Cybersecurity] 6 Misconceptions About Collective Defense
Database Security in the Cloud
More White Papers
Reports
Special Report: Computing's New Normal, a Dark Reading Perspective
Annual Threat Intelligence Report: Perspectives and Predictions
More Reports

"Power BI is already available on mobile for iPhone, iPad and Windows devices. Now, Microsoft has extended support to include Android smartphones."

It's important to note here that "Windows device" support does not include Windows Phone support. Yet another case of Microsoft not standing behind its own device and leaving those of us that do disadvantaged.
Reply  |  Post Message  |  Messages List  |  Start a Board

Love to see continued support for the option of not loading sensitive data into a cloud. While public cloud will continue to grow and dominate the market, there are still times and data that doesn't  yet lend itself to be sent out. Also glad to see continued support for Android as a mobile computing platform.
Reply  |  Post Message  |  Messages List  |  Start a Board
Editors' Choice
Hot Topics