50%
Tweet
Microsoft's Office 365 is the most popular off-the-shelf cloud application, while Slack is the fastest growing among business customers, according to a report from Okta, an identity and mobility management service provider.

Microsoft Office 365 remains the cloud-based productivity suite of choice for many businesses, according to the [email protected] 2016 report from Okta, an identity and mobility management service provider.

The report is based on anonymized customer data from Okta's network collected in the second half of 2015. In sizing up the more than 2,500 customers who use its identity and mobility management service to access more than 4,000 off-the-shelf cloud-based apps, Okta found Microsoft Office 365 was the most popular cloud app during that time period. It was followed by Salesforce, Box, and Google Apps.

While Office 365 earned the top ranking, startup Slack showed the fastest growth in the same period, according the report.

Okta published its first ever [email protected] report in August 2015, which tracked activtions and deployments for the first half of last year.

Adoption of Office 365 among Okta customers increased 116% since the first half of the year, according to the report. 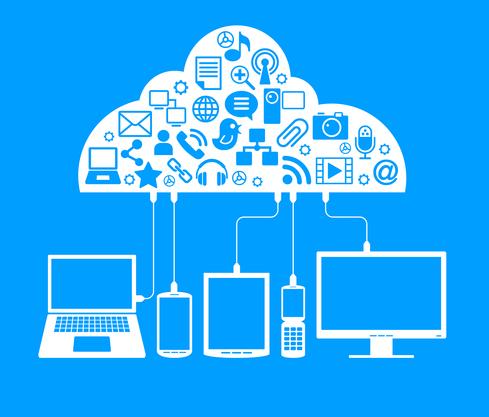 "Office 365 has continued to extend its lead, as Microsoft makes a major push with customers to the cloud," Jenna Kozel, an Okta spokeswoman, told InformationWeek in an interview. "Enterprises are ready to make the move to the cloud to increase the productivity and security of their employees, customers, and partners, and Microsoft has made it a mission-critical business imperative."

Office 365 use is also, interestingly enough, often paired with Google Apps, Okta's latest study found. Over 40% of Okta's customers use both Google Apps and Office 365. And of this group, 30% said they use Office 365 purely for desktop licensing purposes for tools such as Excel, Word, and PowerPoint, while Google Apps is deployed for email and collaboration.

Even as Office 365 gains ground with its productivity apps, Okta customers are also embracing communications cloud app Slack, which posted a 77% increase in usage from the first half to second half of 2015. That growth earned the high-profile startup, which is valued at more than $2 billion, the title of the fastest growing app in Okta's report. 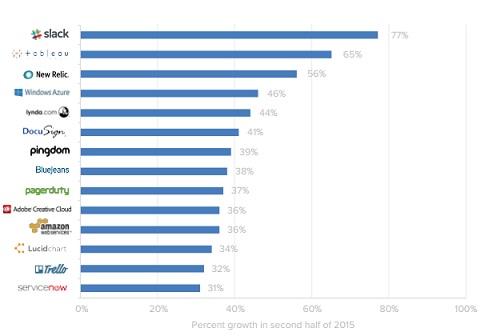 The above chart represents growth of these cloud apps from first-half to second-half 2015.

"The most surprising thing ... is how quickly Slack has managed to earn a customer base in the enterprise," Kozel said. "Not only is Slack one of the fastest growing apps, it moved into the [list of] top 15 most popular apps in Okta's application network."

The study found that the average number of public cloud apps that employees can access ranges between 10 and 16.

And, while in the past email has served as a main introduction to cloud computing for the enterprise, Okta customers are now relying on cloud apps for more specialized tasks. As a result, the use of public cloud services is increasingly morphing into a situation where the use of custom apps is growing in Okta's network.

Because Okta is a cloud-first identity and mobility management company, the report noted, Okta's customers are likely to be more cloud- and mobile-friendly than your average businesses.

Okta customers that are most likely to deploy cloud apps are, not surprisingly, in the tech industry -- mainly software companies and Internet service operators, the study found. Finance, healthcare, and education sectors are far behind in adopting cloud apps and managing them, according to Okta.

Dawn Kawamoto is an Associate Editor for Dark Reading, where she covers cybersecurity news and trends. She is an award-winning journalist who has written and edited technology, management, leadership, career, finance, and innovation stories for such publications as CNET's ... View Full Bio
We welcome your comments on this topic on our social media channels, or [contact us directly] with questions about the site.
Comment  |
Email This  |
Print  |
RSS
More Insights
Webcasts
Staffing & Training a Cyber Incident Response Team
Enterprise Database Strategies for 2020
More Webcasts
White Papers
[Forrester Research] The State of Data Security & Privacy
Database Security in the Cloud
More White Papers
Reports
Special Report: The Changing Face of Threat Intelligence
The AI and Human Element Security Sentiment Study
More Reports

I've tried to like Slack and I can see the draw in terms of low cost unified communications.  For smaller groups it is easy to setup and get going for free but as you mentioned there are products like Skype for Business that offer similar tools and they are more tightly integrated with other business tools.  I think Slack is a good incubator though, their bots seem to have inspired Microsoft to add bots to everything and Skype for Business really has come together in the past 6 months offering more services to compete with the start ups.
Reply  |  Post Message  |  Messages List  |  Start a Board

@Sane so it's not just me - Slack seems more like IRC than anything else. My employer uses Office360 and Skype for Business. There's no need to add Slack when you already pay for a dedicated chat tool that includes group conversations, video, and conference options.
Reply  |  Post Message  |  Messages List  |  Start a Board

I have to say that I've touched nearly every product on the list so none of them really surprised me but Slack being at the top of the growth chart does surprise me a little.  Maybe it is O365 missing a quick ad hoc collaboration tool but every Slack implementation I've seen models an IRC channel more than anything else. I keep seeing it used as a chat service outside the corporate tools for less business related conversations.  Just rolling out O365 with Skype for Business cut down Slack traffic significantly.   Many of the other tools on the list fill niches with easy to deploy cloud based components.
Reply  |  Post Message  |  Messages List  |  Start a Board

This list isn't what I expected to see -- with the exception of Slack. I fully expected Slack to rank highly among enterprise users. I haven't even heard of some of these platforms.
Reply  |  Post Message  |  Messages List  |  Start a Board
Editors' Choice
Hot Topics