As more companies seek to transform themselves digitally and effectively become software companies, some are going to have trouble filling "the developer gap," according to a Cloud Foundry report.

The already high demand for developers is expected to increase even more as more enterprises -- including non-tech companies -- get serious about transforming themselves into entities capable of surviving in the digital economy. But will there be enough skilled code writers to meet it?

These are some of the issues recent report from open source development platform Cloud Foundry touches upon.

The report also noted that technology companies had the biggest development staffs in the past, but that distinction is going to fade as every company realizes it will need developers with modern skills to survive with digitized products and business procedures in the emerging economy.

In many cases, the skills sought will be those that aid in the creation of "cloud-native" applications and otherwise help the company to run its data center like a private cloud, or help them make use of public cloud services, according to the Cloud Foundry report entitled "Identifying the Developer Gap."

That's because software will be the crucial element behind the company's products, when it's not the product itself. "More and more companies seek to transform themselves digitally, effectively becoming software companies -- rather than shoe companies or shipping companies or financial services companies," noted the report, based on a survey of 845 global participants that included developers, IT managers, IT operations administrators, line of business managers, business executives, and IT chiefs.

To participate, respondents needed to have a minimum of two years of experience in IT. Some 58% of respondents noted they had 10 years or more. 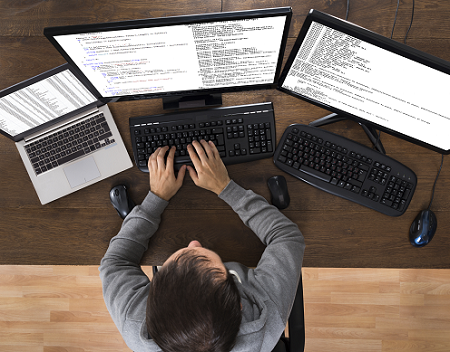 Cloud Foundry is the foundation-backed, open source project that has generated a development platform that is both cloud-based and available for on-premises implementation. Cloud Foundry was started inside VMware and became open source software. It eventually gained the backing of an independent foundation supported by a wide array of companies, including IBM, Cisco, Rackspace, Dell, VMware, Swisscom, HPE, and SAP.

Cloud Foundry has an interest in sponsoring such a survey, which was conducted by ClearPath Strategies. Heightened awareness of the need for developers may encourage greater interest in the adoption of Cloud Foundry's platform for application development. Competing products in PaaS development platforms include Red Hat's OpenShift, Google's App Engine, Salesforce's Force.com and Heroku platforms, Microsoft's Visual Studio Team Services, HPE's Stackato and Engine Yard, and the independent PaaS running on Amazon Web Services.

Although the majority of respondents of the survey said there is a growing shortage of developers, the belief was not unanimous. Thirty-four percent said they agreed "strongly" with the statement, "There is now or soon will be a shortage of skilled developers." Another 30% agreed "somewhat," for a total of 64% willing to say that a shortage can be expected.

However, 18% agreed with the contrary statement, "There is no shortage of skilled developers." Another 18% agreed somewhat with the statement, for a total of 36% saying no gap exists.

At the same time, 20% of survey respondents strongly agreed with a statement that they were having no problem hiring the skilled developers they needed, but 27% strongly disagreed with it.

According to Sam Ramji, CEO of the Cloud Foundry Foundation, the companies that don't see a gap are not those furthest behind the effort to move into the digital economy. They are the ones that have been functioning as part of it for several years (companies such as Amazon, eBay, Google, Apple, and Netflix) and are attracting talent because of their position in the economy. The gap shows up more clearly in companies that are still dominated by their legacy systems, he noted.

He said his impression that this might be the case was confirmed when Netflix made some of its internal code for managing AWS cloud operations available as open source. When he asked Netflix officials why they released home-grown code, they explained that it would make knowledge of what they were doing more widespread. If that happened, then open sourcing it would have served its purpose "primarily for the recruiting value," Ramji recounted being told.

The gap is perceived most strongly by companies in established industries, including manufacturing, business services, and government. "These sectors, mainly companies with vast legacy IT infrastructures and processes, are more likely to see a developer shortage," according to the report.

One of the places where the developer shortage is being actively addressed is in the highly competitive field of financial services, Ramji noted.

Those who are least likely to see a gap in developer availability or to have no trouble hiring the developers are "more than two-times as likely to be in a multi-cloud environment," the report said.

The survey asked participants to "identify the skills their company needs regularly, or on an ongoing basis, in order to maintain productivity and competitiveness." The ones named were mobile application development; coding with Spring Framework Java, JavaScript, Node.js, Go, C++ or other specific languages; and database technology skills in MySQL and NoSQL systems such as Cassandra, Hadoop, and MongoDB.

Ramji said he was a little surprised that the respondents hadn't named some of the forward-thinking skills essential to more cloud-like operations, such a 12-factor application architecture, continuous delivery, continuous integration, and test-driven development. These skills are the ones associated with frequent updates to business applications and those with the ability to apply changes and additions to business logic as it runs.

These skills are also associated with agile programming and DevOps types of environments -- and with organizations that conceive of future applications as "cloud-native," or destined to run only in a cloud environment. A 12-factor application architecture follows 12 best practices, such as always storing a project's application code in a source code management system and making explicit any application dependencies.

Thirty-eight percent are looking for mobile application development, and the same percentage -- 38% -- said they are looking for experience with a particular cloud infrastructure, such as AWS, Microsoft Azure, Google Compute Engine, or IBM SoftLayer.

Sixty-one percent of respondents say they plan to get the skills they need by "upskilling," meaning training their existing staffs instead of outsourcing the work or new hiring.

Ramji said companies trying to transition away from legacy systems, however, will find reskilling the developer staff to be "a tricky process, but it can be done given time and adequate training." If time is short, then more traditional companies will turn to the skills available at external systems integrators and will resort to paying some developers significantly more to pull in the skills they need.

"If every industrial enterprise needs to become a software-driven company, are upskilled developers enough to fill the need?" he asked. The developer gap, he added, may remain an enduring phenomenon over the next several years.

Charles Babcock is an editor-at-large for InformationWeek and author of Management Strategies for the Cloud Revolution, a McGraw-Hill book. He is the former editor-in-chief of Digital News, former software editor of Computerworld and former technology editor of Interactive ... View Full Bio
We welcome your comments on this topic on our social media channels, or [contact us directly] with questions about the site.
Comment  |
Email This  |
Print  |
RSS
More Insights
Webcasts
SASE: The Right Framework for Today's Distributed Enterprises
Managing a Hybrid Cloud Infrastructure
More Webcasts
White Papers
Annual Cybercrime Report
Data-Driven Vulnerability Remediation with Vulcan Cyber - A Case Study With Snowflake
More White Papers
Reports
We Need Your Input: Trends in Workforce Optimization
Building the SOC of the Future
More Reports

So how many developers working on next generation applications are using Cloud Foundry or other platforms as a service? Sam Ramji said no one knows for sure, but he thinks many enterprises are adopters. "If you have just four developers, a platform is less valuable than at Citigroup, with 40,000," he said. A PaaS adds economies of scale to development projects, keeping large numbers of developers working with the same tools and conventions than they otherwise might use and managing their code more effectively. "Bigger companies can do the math pretty quickly," he said.
Reply  |  Post Message  |  Messages List  |  Start a Board
InformationWeek Is Getting an Upgrade!