Why VMware Is Embracing OpenStack - InformationWeek

VMware is going to unusual lengths to work with open source cloud technology at the same time that it's trying to establish its own hybrid cloud service. What's going on?

VMware has launched a multi-pronged effort to capitalize on its customers' interest in cloud computing. To do so, it's relying on a new partnership with Docker for Linux-container formatting and with OpenStack for private-cloud provisioning.

VMware's greater reliance on open source is an indication of how it is struggling to advance on many fronts and its determination to succeed. As a company, VMware has always been adroit at maintaining its proprietary products while working with open source code. Linux was the first operating system it virtualized under ESX Server, with Windows second.

But in this case, VMware is going to unusual lengths to work with cloud open source at the same time that it's trying to establish its own proprietary cloud service. VCloud Hybrid Service, recently renamed vCloud Air, is still adding data centers around the world, even as VMware is reaching an accommodation with OpenStack.

So what's going on? VMware has made no commitment to convert its vCloud Air hybrid cloud service into an OpenStack cloud. Rather, it's the other way around. Its distribution of OpenStack will be VMware-specific for on-premises use. Instead of recognizing the default hypervisor, KVM, in OpenStack, it will instead offer an OpenStack that provisions its own ESX Server virtual machines.

"OpenStack is a framework for delivering cloud services" that can accommodate different virtual machines, he continued. After OpenStack provisioning has been set up, there's still a need for management tools to monitor and move around the VMs that have been created. The integration of vSphere and other core software will enable an OpenStack on-premises user to do that with their familiar management tools, he said. 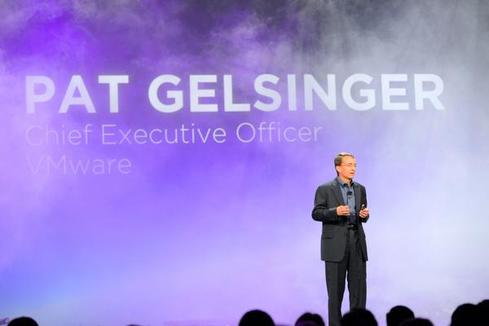 And in case anyone remained in doubt about the value of VMware's contribution, VMware president Carl Eschenbach explained further: "It's a fallacy that OpenStack is free. You still have to build everything around it" to manage OpenStack workloads after they're deployed. You will either invest extensively in your own staff time to set up an OpenStack cloud or you will hire consultants to do so, he said.

So who needs VMware's help in doing that? According to the opening keynote address, the Massachusetts Institute of Technology IT staff does. Garry Zacheiss, MIT's senior manager for server and system administration, said his staff was impressed with OpenStack as a project but was skeptical that they'd want to go deeply into its Neutron network virtualization. They turned to VMware, with its Nicira SDN brain trust, and found "network virtualization was absolutely critical if you're going to use hybrid cloud." It's relying on VMware's version in its OpenStack implementation.

Zacheiss concluded: VMware's "software-defined data center is how we expect to future-proof our data center."

VMware Integrated OpenStack is still in a state of qualified beta, meaning many customers may sign up to use it. VMware will selectively choose those that it wants to allow to test drive its offering until it becomes available in the first half of 2015. As long as it's a viable alternative, VMware customers will have one more reason not to turn to Amazon, Azure, or Compute Engine. They'll have one less reason to seek to reduce expenses by grafting on more and more Windows Server's Hyper-V.

Does VMware's OpenStack initiative show a lack of confidence in its own, getting-started hybrid-cloud service? The answer, I think, is both yes and no.

I guess it makes sense. The VMWare guys don't want to have to open support tickets for the Red Hat hernel issues. Especially since they forked it to create the operating vmkernel.
Reply  |  Post Message  |  Messages List  |  Start a Board

VMware is "opening up" to support OpenStack, when it wishes you'd just implement the software-defined data center as offered by the VMware product line and get it over with. But VMware's OpenStack distribution will not have Red Hat's KVM as the default hypervisor now, or in the future, Carl Eschenbach, COO & president, affirms in interview. If you implement it, VMware will not support it.
Reply  |  Post Message  |  Messages List  |  Start a Board

Yes, it's nice to see a vendor that owns 90% or so of a given market not rest on its laurels. Maybe Windows Mobile was an object lesson? And speaking of Redmond, of course, anytime VMware can take a shot across Hyper-V's bow ...
Reply  |  Post Message  |  Messages List  |  Start a Board

This is a good move by VMware and a recognition of OpenStack's wide acceptance. One only hopes that in using VMware VMs, they did not also add proprietary extensions to their OpenStack distribution.
Reply  |  Post Message  |  Messages List  |  Start a Board