CenturyLink CTO Jared Wray, Intel's Nicholas Weaver, and others at Interop talk about a future where the cloud is just how we all compute.

At the Cloud Connect segment of the Interop Conference in Las Vegas this week, an unusual problem arose: How to describe the "post-cloud" era?

When it comes to cloud computing, today's practitioners are preoccupied with figuring out compatibilities, sifting through complex pricing schemes, and selecting the perfect virtual server among dozens listed. But most of these actions may soon be irrelevant. In a talk entitled "The Post-Cloud: Where Google, DevOps, and Docker Converge," Nicholas Weaver, head of the SDI-X Project (software defined infrastructure for future data centers) at Intel, did his best to describe how such an age might arrive.

"We keep getting wrapped up in what we think the cloud is," he warned. "The 'post-cloud' is what emerges in the next phase. It's just a phrase for the computing our grandchildren will do."

Weaver used Google, DevOps, and Docker as examples of three elements that will be ubiquitous in the post-cloud world. Google keeps adding to the information that it can bring to its users in Search, Google Maps, and other services. Its Search engine started out relying on Web crawls covering several days in order to index and add to its reference data. The information Google now accesses is updated in something that comes closer to real-time, instead of being several days old, and it will keep moving toward real-time updates.

[Want to learn more about DevOps? See 6 Steps To Survive A DevOps Transformation.]

Google Maps is an example of a service that is available anywhere, at any time, on a variety of devices, and that's how many more Web services will function in the future. Many applications use Google Maps because Google has made the service available to third-party developers through a public-facing API. 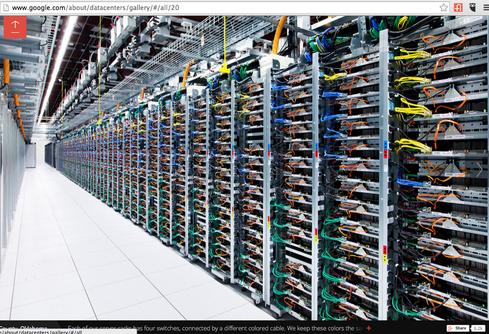 Your data center or mine -- or Google's?

Weaver recounted stopping once on his way to one of the most important meetings of his life to buy a laminated map that he unfolded in his car and used to find his way across Louisiana's unfamiliar terrain. He said it is already nearly inconceivable that a young man on his way to meet the woman he is to marry would use such an unreliable method of navigation. Web-based location services will be available everywhere, to anyone with a connection to the Internet, he predicted.

The DevOps And Docker Effects

DevOps today has an impact on how quickly and reliably businesses can develop new software and put it into operation. It seeks to eliminate the divide between software development and data center operations and to ensure that what developers produce will run efficiently in production settings. The main advantages may be improvements in business applications and better revenue as a result.

But the purpose of improving technology goes beyond enhancing a narrow revenue stream. The real goal of technological progress is to do things more efficiently and to make possible services that had been impossible before. In the future, DevOps will allow frequent software updates on many other fronts, making Web services a more powerful vehicle for the intelligent use of fresh information, Weaver said. He ticked off several efficiencies that will be routinely pursued in the post-cloud world.

So how does Docker fit into such a desirable picture of the future? Docker offers a technological step forward that enables many additional efficiencies in software development and deployment, Weaver said. Docker makes it easier to create a software package of interdependent parts, such as an application, Web server, and database, along with the scripts needed to launch each in sequence. Docker also make it efficient to move such a software package around. "This is where Docker killed it," he declared.

Quickly developed software, easy to package in a standard way and move around, will be an enabler of the post-cloud world, because Web services, always commanding fresh information, will follow their users around to a nearby data center -- wherever a person may be, on whatever device.

What are now competing cloud services will be interlinked in a continuous mesh of cloud systems -- "a massive cooperation of cloud domains," Weaver predicted. The world at that point could be described as "post-cloud," because no one will need to know about or worry about what specifics rule his or her Web services. They will simply be continuously available.

DevOps: Everyone Gets A Turn

Another speaker, Jared Wray, CTO of cloud at CenturyLink and former CTO of Tier 3, a Seattle-based public cloud supplier acquired by CenturyLink in 2013, cited his own experience moving development teams at CenturyLink into a DevOps approach to IT. "We expect if you build it, you run it," he said.

To get there, he had to make a number of changes. The CenturyLink IT department consists of more than 4,000 people, with 500 managers, in what he described as a hierarchical telecommunications organization. Good developers are promoted to become managers, where they no longer produce code and instead concentrate on management issues concerning the people who do.

The large body of staffers in IT had a huge number of titles, which Wray cut to five for the cloud unit. Titles, he concluded, "get in the way of anyone taking ownership" of difficult issues that come up. There's always someone with a title that better applies to the issue. By getting staff to use more shared titles, people were less likely to wait for someone with the correct title to step forward.

In addition, managers were generally named for development teams because they were respected developers themselves. But 80% of their responsibilities remained in writing code and only 20% in managing others. There has been opposition to many of the changes, he conceded, but "the important thing is to find and champion small teams … We invite teams that are against us to come and sit in with us," and observe the more DevOps-like process. When they're willing to, they sometimes take an interest and at least move toward some understanding of what the goals of the changes are.

Instead of a division of development and operations, the cloud unit names one developer as the head of operations for a week at a time who is responsible for the 24-hour maintenance of the software the unit produces. That means in the middle of the night, if it breaks, he or she is called to fix it. The developer on maintenance duty is known as a "superhero," because he or she needs to know everything about the software and how well it runs. The appointments tend to break down the barrier that's known to arise among developers who dislike operations staff pointing out deficiencies in the software they receive, Wray said.

Hybrid Cloud Will Just Be Cloud

Bernard Golden, VP of strategy at ActiveState, supplier of the Stackato PaaS system, said what is now known as hybrid cloud will in the future simply be regarded as intelligent cloud use, with on-premises services combining with public cloud services, as if the two were part of the same computing environment.

Thinking the two environments must be compatible and aligned will also go by the wayside. "Hybrid is heterogeneous. There's something on-premises working with the public cloud, or more than one public cloud."

To underscore the point, he added that heterogeneity is assured thanks to the tendency of employees to adopt a cloud service they like rather than one prescribed. "Shadow IT will not let you standard on just one … Shadow IT is IT," he said.

A future in which the barriers between IT silos have fallen away and a network of clouds makes cloud services constantly available is still a long way off. It will be an era experienced by the grandchildren of today's IT manager and cloud builders. But the cloud developers at CenturyLink are an example of how barriers are being lowered between IT silos, and may one day fall away between cloud providers. It's an enticing future, with a great deal of work still to be done by the existing generation to bring it a step closer.