Rackspace On The Block? - InformationWeek

Rackspace, confronting a grinding competition to supply infrastructure as a service, has hired Morgan Stanley to advise it on whether the company should enter an exclusive partnership or sell itself to one of the parties that has expressed interest in buying the San Antonio company.

The move makes it more likely that Rackspace will be acquired by a company that is ambitious to quickly build its cloud market share. That might be IBM's SoftLayer unit, CenturyLink Savvis, or Verizon Terremark, all of whom share some of Rackspace's managed hosting service background. Microsoft also might be looking at Rackspace, although Microsoft would be hampered by the preponderance of Linux workloads in the Rackspace Cloud.

"In recent months, Rackspace has been approached by multiple parties who have expressed interest in a strategic relationship with Rackspace, ranging from partnership to acquisition," the company said in an 8K statement filed with the Securities Exchange Commission May 16.

"Our board decided to hire Morgan Stanley to evaluate the inbound strategic proposals, and to explore any other alternatives which could advance Rackspace's long-term strategy," the statement said.

The company took the step after reporting first quarter results on May 12 that were stronger than expected. It pulled in $421 million in first quarter revenue, beating expectations that it could do no better than $419 million. It was a 16% increase over the same quarter the year before. The company's $25 million in net income resulted in earnings per share of 18 cents, a penny below last year's but 6 cents above analysts' estimates of 12 cents per share. It probably decided to move while it was still in a position of perceived financial strength. 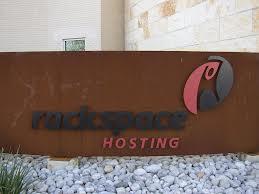 Nor does the Morgan Stanley link mean it's automatically putting itself on the block. "No decision has been made and there can be no assurance that the Board's review process will result in any partnership or transaction being entered into or consummated. The company has not set a timetable for completion of this process and does not intend to discuss or disclose further developments with respect to this process unless and until the Board approves a specific partnership or transaction," the filing said.

Nevertheless, Rackspace, a company founded to set up infrastructure and run it as outsourcers for other parties, is caught in the middle of a rapidly changing cloud landscape. It co-founded the OpenStack project with NASA, took over leadership as NASA withdrew, then successfully navigated the turnover of the project to the OpenStack Foundation. But as the open-source cloud software matures, that makes it harder to Rackspace to stand out from the crowd. One of its early advantages was OpenStack expertise, and now that expertise is spreading throughout a wider community.

It sought to differentiate itself in the early days as the cloud with technical support -- "fanatical support," it called it. But many of the cloud's early users were technically skilled people who were looking for a low cost, flexible platform on which to do development and run applications by remote control. And the most competitive cloud providers have driven prices down relentlessly.

Google stepped in with cuts averaging 32% on virtual instances March 25, with a 68% drop in Google Cloud Storage. Amazon Web Services followed March 26 with a 38% cut on its most popular server instance and a 51% cut in storage prices. A few days later, Microsoft followed suit.

In a realm where prices drop out of the sky, where is Rackspace to play? It is transitioning its business from managed hosting into public infrastructure as a service. The transition is going well, overall, but the move leaves it with a set of consulting and integration skills available to the cloud computing side of its business for which it must charge, and Wall Street analysts, witnessing the cut-throat price cuts, have been pessimistic it will find a way to do so.

Jillian Mirandi, an analyst at Technology Business Research, wrote on the day of Rackspace's earnings announcement that the company was caught in between the bare bones infrastructure providers price cuts and the outsourcing, legacy system integrating capabilities of the new arrivals in the cloud. They would be IBM, HP, Cisco, and Accenture, among others.

With "AWS, Google and Microsoft Azure coming in from the more traditional, cheap cloud compute and storage side, Rackspace faces increasing competition from all sides," she wrote. Rackspace has OpenStack and hybrid cloud operations expertise, but "hybrid cloud capabilities and OpenStack support are quickly becoming table stakes, and a direct or partner-led managed services layer is not far behind."

Rackspace also has experience in combining development and operations -- DevOps, in a word -- as it's made its transition into cloud that it's willing to share with customers. Other providers have not ventured there.

Rackspace brings an interesting blend of assets to cloud computing. Its 8K filing signals a decision within the company to test the waters and see what is the best deal it can strike, while earnings are still respectable and its perceived value is strong. And if no deal is struck, as the filing indicated might be possible, then more people outside of Rackspace will wonder how it's going to proceed further down its rocky path.

Charles Babcock is an editor-at-large for InformationWeek and author of Management Strategies for the Cloud Revolution, a McGraw-Hill book. He is the former editor-in-chief of Digital News, former software editor of Computerworld and former technology editor of Interactive ... View Full Bio
We welcome your comments on this topic on our social media channels, or [contact us directly] with questions about the site.
Comment  |
Email This  |
Print  |
RSS
More Insights
Webcasts
Securing and Monitoring Networks in the 'New Normal'
Building the SOC of the Future: Next-Generation Security Operations
More Webcasts
White Papers
2020 Gartner Market Guide for Network Detection & Response
2020 SANS Enterprise Cloud Incident Response Survey
More White Papers
Reports
How Data Breaches Affect the Enterprise (2020)
DNS Network Traffic Volumes During the 2020 Pandemic
More Reports

Quite agreed. Good company. Honestly, I've never head anyone say a bad word about it. I hope that if they're acquired, the company's culture of great customer service is not lost or diluted.
Reply  |  Post Message  |  Messages List  |  Start a Board

Rackspace is a company that has brought a major contribution to cloud computing in the OpenStack project. It's manner of handing off control of the project, once NASA, cue  to stressed-government priorities, had to withdraw from it, should serve as a model for how to build cross-industry goverance into an open source project. Many of us hope that it will yet find its niche in the overall cloud competition.
Reply  |  Post Message  |  Messages List  |  Start a Board
Editors' Choice
Hot Topics