"We had left our Microsoft-centric customers in the dark or forced them into more of a VMware-oriented approach," said Jeff DeVerter, general manager of Microsoft Private Cloud at Rackspace, in an interview. Rackspace and Microsoft announced their partnership Monday afternoon.

As a designated member of the Microsoft Cloud OS Network, Rackspace will offer a Windows 2012/Hyper-V environment that's managed by System Center and provisioned and managed in a manner similar to the Azure cloud service, DeVerter said.

DeVerter joined Rackspace six years ago to build out its Microsoft SharePoint hosted services, a major piece of its business, along with Microsoft Exchange hosting. "I became convinced we should support all of the Microsoft applications, including the Hyper-V hypervisor," he said, because Microsoft customers tend not to use their applications in isolation from one other.

In addition, DeVerter said, not everyone is ready to put their corporate data in the public cloud, while a Microsoft private cloud service inside Rackspace gives them an alternative place to put data and keep it in compliance. A private cloud operation consists of servers running Microsoft's Windows Azure Pack that lets customers build miniature versions of Azure for their own operations. 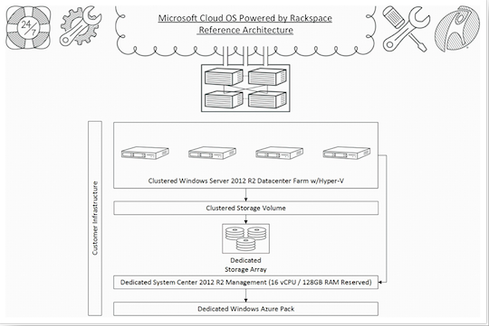 At the same time, Rackspace's adoption of private cloud packaging inside its cloud data centers is another step back from the brink. In May, it hired Morgan Stanley to act as an agent to explore the possibility of being acquired or taking on a tight partner relationship. In mid-September it announced it would remain independent and redouble its efforts to offer cloud services in various supported forms. That followed a strong second quarter, in which it garnered $20 million in new revenue and grew its business 17% over the same quarter the year before. Its third quarter, ended Sept. 30, showed an 18.3% growth in revenue over 2013's Q3.

Marco Limena, VP of hosting service providers at Microsoft, said he welcomed "the combination of Rackspace's Fanatical Support and Microsoft cloud platform," in a blog post Monday. The combination will be offered as what Rackspace now calls its "managed cloud" service. That's basically Rackspace technical support taking responsibility for the operation of servers, operating systems, and virtual machines for customers who self-provision them in a manner similar to a public cloud setting. On Amazon Web Services, however, the customer not only self-provisions them but takes responsibility for their continued operation.

DeVerter seconded Limena's comments: "That is exactly what we have now -- world-class Microsoft cloud platform technology backed by an army of Rackers." It's not commonly known how much of Microsoft's licensed use of SharePoint-as-a-service already takes place on Rackspace servers. It amounts to 85% of Microsoft's third-party SharePoint business, DeVerter said. Rackspace is also a large Exchange and Lync instant messaging host, he added.

Microsoft describes its Azure Pack as a cloud operating system, or Cloud OS, pulling together Hyper-V operation with Windows 2012 servers and System Manager's Virtual Machine Manager. When implemented in a Rackspace data center, customers will self-provision the servers they want and be charged by the hour for the infrastructure. They will also be charged -- separately, emphasized DeVerter -- for technical support. The recently implemented practice has helped revitalize Rackspace's business by showing customers there are no hidden charges for branded Rackspace technical support. Customers can choose whether they want to pay the fee, go elsewhere, or provide their own operational responsibility.

The Microsoft cloud platform inside Rackspace can be implemented as a private cloud setup with greater controls, private network segments, and dedicated servers.

As we pull out of a difficult time in our nation's financial history, government agencies struggle to meet information technology demands. Agencies must focus on the cloud and a strong information governance program to avoid the sort of attention recently focused on the IRS. Get the Time To Reconsider Enterprise Email Strategy report from InformationWeek Government today. (Free registration required.)

Charles Babcock is an editor-at-large for InformationWeek and author of Management Strategies for the Cloud Revolution, a McGraw-Hill book. He is the former editor-in-chief of Digital News, former software editor of Computerworld and former technology editor of Interactive ... View Full Bio
We welcome your comments on this topic on our social media channels, or [contact us directly] with questions about the site.
Comment  |
Email This  |
Print  |
RSS
More Insights
Webcasts
Take DevOps to the Next Level
How the Rapid Shift to Remote Work Impacted IT Complexity and Post-Pandemic Security Priorities
More Webcasts
White Papers
2020 SANS Enterprise Cloud Incident Response Survey
The Top 5 Mistakes Everyone is Making in Vulnerability Remediation
More White Papers
Reports
Key Strategies for Managing New Risks in Cybersecurity
The State of DevSecOps Report
More Reports