Netcraft survey on world's largest web hosts shows DigitalOcean has risen to No. 3 from 568th place two years ago.

DigitalOcean has obtained a $50 million line of credit from Fortress Investment Group to expand its operations after Netcraft named it the third-largest hosting service in the world. Netcraft, a UK-based Internet-research firm, said DigitalOcean's rise over the last two years has been "meteoric."

Netcraft said DigitalOcean now hosts 124,000 virtual servers running more than 2 million public websites. The Netcraft statistic typically measures hosted websites, which may provide e-commerce applications, content delivery, or both. That makes DigitalOcean's stats more comparable to Rackspace or Hetzner Online, both of which also host large numbers of websites, than to Amazon Web Services or Microsoft Azure, according to Netcraft.

The number should be taken with a grain of salt, since a website total doesn't reflect the amount of traffic each site is generating or the amount of revenue related to that traffic. Rackspace and Hetzner might come out ahead of DigitalOcean, if Netcraft was reporting on those metrics.

DigitalOcean claims it has 360,000 developers as active customers and adds 20,000 a month. It attracts developers with its high-speed operations and low cost. Its point of entry is a virtual server on a host loaded with 1,920 GBs of solid state disk, allowing a customer's virtual server to be called up in 55 seconds but costing only $5 a month. It's known to attract large numbers of Ruby programmers due to the volume of Ruby and Ruby on Rails documentation there. It also hosts many Ruby programming projects.

Karl Alomar, chief operating officer, said DigitalOcean had 631,726 "unique" servers at the start of December in its cloud data centers. It's adding 50-60,000 a month and will have about 700,000 by the end of the year. DigitalOcean runs open source KVM-based virtual machines.

DigitalOcean's rise up the Netcraft list of Internet-facing servers has been meteoric. It had 10,978 unique servers in December 2012 as a young infrastructure-as-a-service supplier, Alomar said, with a Netcraft count of about 138 "Web facing" servers. That placed it 568th on Netcraft's list. Two years later, it has 124,000 Web-facing servers and ranks No. 3 overall. It started 2014 in the No. 11 spot. 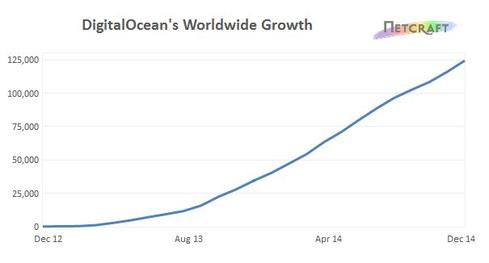 At its current rate of expansion, Alomar said DigitalOcean expects to move into the No. 2 spot in the second quarter of 2015. The closest comparison for use of the "hosting" metric of Web-facing virtual servers would be between DigitalOcean and Rackspace, a firm that's pivoted away from commodity IaaS to managing the virtual systems that it hosts. Amazon Web Services manages the underlying infrastructure of its data center operations, but leaves it to customers to manage their own workloads.

DigitalOcean has 120 employees and produces its own cloud governance software. That software has not yet reached the point where it provides a code deployment service, clustering service, or load balancing service, as Amazon does. Nevertheless, DigitalOcean's rise indicates the growing appetite for bare-bones IaaS and website hosting at a competitive price.

DigitalOcean is sometimes referred to in the same breath as Atlantic.net in Florida, which hosts the Orlando Magic's website; Linode, a N.J.-based hosting service; or OVH.com in Europe.

"We don't see ourselves as an enterprise infrastructure provider," said Alomar in an interview. It started out and remains programmer-oriented, producing Docker-oriented hosts running CoreOS and other developer features. The firm frequently sees small groups of developers forming companies, hosted on its infrastructure, selling software or software-as-a-service.

Digital Ocean has data centers in New York, San Francisco, Amsterdam, London, and Singapore. By the end of the first quarter 2015 it will also have one in Frankfurt, Germany. It is likely to add three more in 2015, Alomar said, bringing its number of global regions to nine. It usually operates two data centers in each region.

In explaining what its survey counts, Netcraft said: "Each of the sites found in our monthly Web Server Survey is attributed to a hosting location using reverse DNS and IP address delegation information. Data for these networks is aggregated into parent companies so that a league table of companies controlling the largest number of websites is produced."

In simpler terms, only Amazon was growing faster than DigitalOcean in landing new websites, said Netcraft in October.

Charles Babcock is an editor-at-large for InformationWeek and author of Management Strategies for the Cloud Revolution, a McGraw-Hill book. He is the former editor-in-chief of Digital News, former software editor of Computerworld and former technology editor of Interactive ... View Full Bio
We welcome your comments on this topic on our social media channels, or [contact us directly] with questions about the site.
Comment  |
Email This  |
Print  |
RSS
More Insights
Webcasts
Take DevOps to the Next Level
Using MS Teams as Your Phone System - FREE Event 4/14
More Webcasts
White Papers
2020 SANS Enterprise Cloud Incident Response Survey
The Top 5 Mistakes Everyone is Making in Vulnerability Remediation
More White Papers
Reports
Are Unprotected Cloud Databases Leaking Your Data?
Assessing Cybersecurity Risk in Todays Enterprises
More Reports
Copyright © 2021 UBM Electronics, A UBM company, All rights reserved. Privacy Policy | Terms of Service