ViaWest's Compark outside Denver is a massive facility with 140,000 square feet of raised floor capacity and provides a view of a "fourth-generation" cloud data center designed for today's enterprises. It makes it possible for the company to act as a public cloud service provider, a colocation service provider, and a managed service provider.

The fact a modern data center builder targeting enterprise customers combines the three types of services in one facility also shows how lines are blurring between public cloud and private cloud. At Compark, both types serving the same customer could easily coexist in the copious space, with high-ceilings, specially lit with LEDs designed for maximum human compatibility. Compark looks like no other data center, said Dave Leonard, ViaWest's chief data center officer.

"Customers like being there" and experiencing the easy-on-the-eyes lighting in a 24-foot high, airplane hangar-like space. "It's not chunked up into a bunch of small rooms," he said.

Compark was built to the same design as the company's data centers in Plano, Texas, and Las Vegas, which have been certified Tier III facilities after a review by the Uptime Institute.

However, ViaWest hasn't sought the same designation for Compark, because the competitive climate for providing data center services in the Denver area doesn't demand it, Leonard said. The company has five data centers in the region, but Compark is the first it labels as a fourth-generation facility.

The Uptime Institute defines a Tier III facility as one that is highly prepared for and able to survive power outages -- one that can provide continuous data center cooling regardless of outside temperatures and that meets certain resiliency and reliability standards. It must also be highly physically and operationally secure.

The only higher level of operation is an Uptime Institute Tier IV facility, which is one in which all systems are fully fault tolerant. 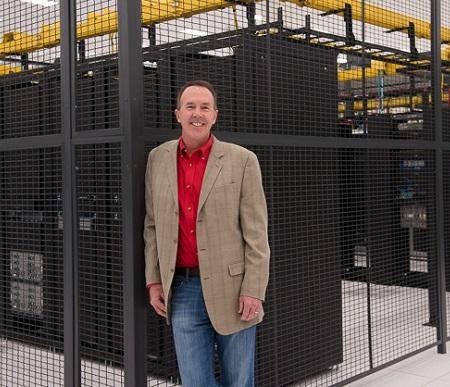 But managed services produce more revenues, and enterprise users are finding it increasingly attractive to turn over management of virtual machine systems and virtual host server operating systems to their service provider. The customer still owns and takes responsibility for the application and when it runs, said Leonard.

As part of efficient operations, Compark has an electricity consumption rate, expressed in its low PUE or power usage effectiveness rating, of 1.3. The average enterprise data center gets a 2.0 rating, or uses twice as much power as needed to actually do the computing work.

Facebook, which builds its single-purpose data centers in favorable climates, can achieve a 1.07 rating. A 1.0 rating means all the electricity coming into the data center is used only on computing. There's no publicly known recipient of such a rating yet.

Leonard said 1.3 is good for a general purpose data center that has many enterprise customers and must provide certain uptime assurance guarantees. ViaWest can't run its server room as hot as Facebook does and must at all times keep a reservoir of cold water available for the 15-20 minutes of cooling that might be needed in the event of a power failure.

"That means if you need to replace, you need to knock a big hole in the wall of an operating data center and maneuver a large piece of equipment into the right place. Welders would need to come in to attach the refrigerant pipes. It would be like a working construction site in a working data center," he explained.

With the chillers outside the data center, they can be maintained or replaced without posing such a threat to continued operations.

ViaWest uses the air compressor part of the units only when it has to. Its preferred option is cooling by evaporation, which the chillers can also do, created cooling coils across which warm air can be drawn.

It's the ability to use evaporative cooling in Denver's dry air much of the year that reduces Compark's electricity consumption and helps its PUE. In the winter, ambient air can be filtered and drawn into the building, eliminating the need for cooling mechanisms.

Another feature by design is that Compark is a "carrier neutral" data center hub, with a dozen telecommunications carriers offering their services there. Such a facility makes it easy for an enterprise served by one telecom carrier to establish a communications link with a business partner served by another. It also makes it possible for an enterprise to choose the most direct route to other cloud service providers or other outside services.

ViaWest has placed its five Denver metropolitan area data centers on a dark fiber ring that it's lit up with its own networking equipment. A carrier at one data center may not be at another, but all customers may use the carriers converging on ViaWest Denver facilities thanks to its data center network.

The ring has 100 Gb/s connections between the facilities on the Denver ring. Customers may also link to ViaWest facilities in other locations, including large data centers in Las Vegas, Plano, and Portland, Ore. But customers don't have to use a ViaWest net if they already have a telecom carrier of choice.

"We're not trying to force our network down somebody's throat," Leonard said. Part of the attraction of a carrier neutral facility is that customers can avoid having their network options dictated to them, he noted.

Given such facilities, customers sometimes consider locating their SAP supply chain applications in a ViaWest facility, with links available to suppliers, partners, and customers.

If virtualized, ViaWest will manage the virtual systems, virtual server host and its operating system, and the network connections, leaving the customer to worry only about the SAP application. Leonard said ViaWest's virtual environment is based on VMware vSphere and vCloud products.

ViaWest is repeatedly building data centers, striving to make them more efficient, according to Leonard. For an enterprise CIO, building a data center "is a once-in-a-lifetime event" and he'll have no opportunity to hone the needed skills to get good at it.

Unlike Facebook, which can operate its huge data centers with minimal staff, ViaWest keeps experienced software engineers and operational people on duty to reach the goal of providing 100% uptime.

Leonard said high-speed private communications are an essential part of providing "a blended colocation/cloud facility." With it, hybrid cloud operations can come into being based on the virtualized systems in the enterprise data center and in those parts of the public cloud and colocation or managed services that it wants working together.

The future of cloud computing isn't so much about an inevitable movement of everything into the public cloud. Rather, it will be toward getting different parts, each in some way devoted to getting enterprise work done, to become able to pull in the same direction.

Charles Babcock is an editor-at-large for InformationWeek and author of Management Strategies for the Cloud Revolution, a McGraw-Hill book. He is the former editor-in-chief of Digital News, former software editor of Computerworld and former technology editor of Interactive ... View Full Bio
We welcome your comments on this topic on our social media channels, or [contact us directly] with questions about the site.
Comment  |
Email This  |
Print  |
RSS
More Insights
Webcasts
Securing and Monitoring Networks in the 'New Normal'
ROI and Beyond for the Cloud
More Webcasts
White Papers
A Practical Guide to SASE Migration
Zero Trust Evaluation Guide
More White Papers
Reports
How Data Breaches Affect the Enterprise (2020)
The Drive for Shift-Left Performance Testing
More Reports

10 IT Trends to Watch for in 2021 Cynthia Harvey, Freelance Journalist, InformationWeek,  12/22/2020
White Papers
What To Consider Before Renewing Your SD-WAN
A Practical Guide to SASE Migration
The Essential Guide to Securing Remote Access
2020 Gartner Market Guide for Network Detection & Response
From MFA to Zero Trust